“You are a software engineer and you want to pursue movies and so you join Pune film institute but you know you weren’t wrong to do so when you top the final exams.

While the world plays safe and proceeds in a sure conventional way for their debut, you make your debut film on an offbeat subject but you know you weren’t wrong when you walk away with almost all the best directorial debut awards of India ( Gollapudi Srinivas National Prize for Best Debut Director, Aravindan Puraskaram for Best Debut Director and  Best Picture at International Film Festival of Mumbai) and earn international acclaim all over the globe.”

A genius in the making? A maverick? …

We are alluding to director Anup Kurian who created quite a ripple in 2004 in the national and international film festivals with his offbeat debut movie Manosarowar, and who will be again gambling with The Blueberry Hunt this January which has Naseeruddin Shah in the lead. The movie is a thriller but as is expected from an innovative person like him, it has a different brand of different-ness. If we go by the fact that he convinced an actor of Naseeruddin Shah’s caliber to act in it, then we can safely assume that he isn’t wrong this time too and in fact, has more chance of a mass acceptance, which was not that pronounced in Manosarwar, his first. Especially with some brilliant marketing strategy this time, noteworthy of which is the graphic novel of the same theme available and published in sequence in their fan page in facebook (a first in india), The Blueberry hunt is creating quite a buzz among the people.

Fried Eye managed to contact Mr Kurian for a brief and candid chit chat , where he spoke to us a little about the much awaited movie The Blue Berry hunt , the excerpts of which we are sharing here. We also had the opportunity to catch up with Baburajan, the illustrator of the novel about this ‘novel ‘ concept of promotion and who was very accommodating and entertained our curiosity about the movie and graphics.

Q. 6 years from your last film, where was Anup Kurian in between?

I was all around the world. Traveling, working etc. I sold cakes in Toronto and Ontario, wrote software for some American companies in Portland, Charlotte, Chicago etc.

The way ‘Manasarovar’ turned had a tremendous impact. I had to make sure another film I make is unique, can attract top talent and be do-able with my resources. All of this takes time.

But I guess the gap between films will be lesser from now onwards.

Q. Your last film Manasarovar, had a different kind of story and it was well appreciated. Despite all this, it did not make a good business in India. So, what are your plans for the The Blueberry Hunt?

A-Theatrical collections do not signify the quality of a film.

We could not afford or manage a good campaign for Manasarovar – It was released with zero publicity. Whether the film is good or bad, it needs good publicity and a good campaign to attract viewers to theaters.

Also, a film can be good, but it may not work in theaters. The opposite is also true. ‘The Blueberry Hunt’ has Naseeruddin Shah – a star in his own right. The film automatically gets a bigger visibility. Plus we are better prepared with the Print and Advertisement campaign for TBH. A lot of our prospective audience is coming to know about the film through Facebook campaign where we publish a graphic novel based on the film – Such platforms did not exist when we made ‘Manasarovar’.

Q. Is this a niche film made for a niche audience?

A-Now a days what audience a film finds is purely depending on the amount of money spent on advertisement. More the money, more the audience knows about the film. So, there is no niche audience we are targeting with TBH

Q. How did the idea of a Graphic Novel for the film come?

Baburajan – our illustrator – created an amazing title sequence for The Blueberry Hunt. That was when this idea of a graphic novel occurred.

Both myself and illustrator Baburajan are big fans of the graphic novels. The Blueberry Hunt had a story line which could translate well to the format. 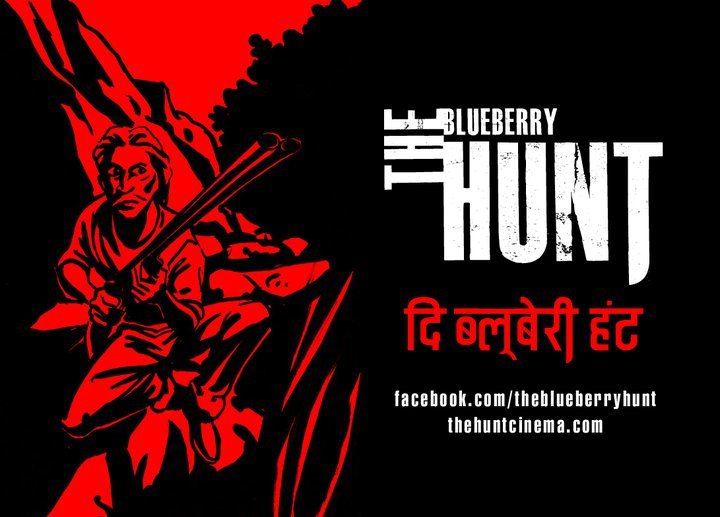 And that was a cue for us to shift our focus on Mr. Baburajan, the man behind the red hot graphics of The Blueberry hunt graphic novel in facebook and we literally Hunted him down for an at length interesting discussion

FE: What led to your interest in cartoons and illustrations?

BM:Since my early childhood I had the habit of drawing. My father used to buy many Soviet union children’s books for me to read and the illustrations in them really throbbed my mind. Those pictures had great influence on me and I still do believe that Russians drew great illustrations for kids – all around the world. Beyond any doubt this was the one reason which made me enter into the field of illustrations and so on.

FE: Our readers would like to know about you and your work before TBH.

BM:I had worked with many companies before I did TBH graphic novel.I had worked 6 years as a story board artist in Young and Rubicam at Dubai and I worked as a 2D animator in Toonz animation ,Trivandrum technopark. Now I am a fulltime freelancer. Graphic stores really thrill me and that is what I am doing now.

FE:How did the collaboration with you and Mr. Kurian happen for TBH?

BM:I had been for the shooting location with my colleagues Shibu and Mathukutty who had done the art direction for Anup Kurian’s film. I was quiet interested in doing one of that kind myself and when I found that this story suited for a graphic novel , I forwarded a suggestion to Mr.Kurian. Hence Kurian allowed me to do the graphic novel of the movie TBH , let me say quiet independently.

FE: Red is an evident colour in the graphic novel of TBH. Why so red?

BM: The nature of this story compelled me to use the colour red exclusively. The title illustration of the movie had also been done by me, and that was also in red. So I chose red

FE: You have been doing illustrations for a children magazine. How different was the work for TBH?

BM: TBH graphic novel is exclusively for elders. When the subject is so ,wont be picture too? Angles,beauty of picture and all were done that way. The difference from children’s illustration is that the picture for children must be exciting,curious and simple. Different columns shall be there ,and the way of narration must be simple.

FE: Graphic Novels in India has seen a sudden boom in popularity. What are the trends that are going to rule in the near future?

It is not advisable to use stereotypes in graphic stories. Different experiments in illustrations,diversity in narration,change in production will create interest among artists and readers. Definitely this treatment will bring popularity for graphic novels. I think in India we have a great possibility in this field -movies,literature,experiences and so on.

Fried Eye says- Well, it will be interesting to see how the audience receives the Movie and the novel next year when it is released and judging by the marketing strategy and response of the fans to the concept, it seems to be much anticipated. Maybe if the movie strikes gold then we will see a surge in some more innovative ‘graphical’ techniques by the industry , which will be a welcome change from the regular flashy bollywoodish promotions.