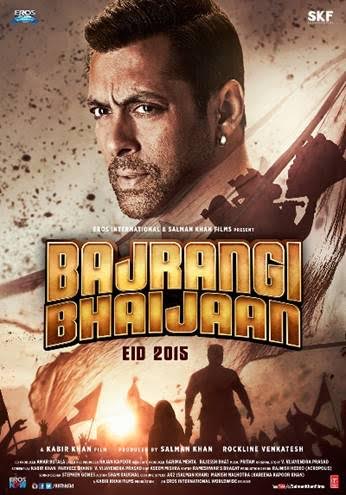 Years back a certain Tara Singh had crossed the border for his beloved wife, taken on the brute forces of hostile neighbors and in all jingoistic fervor shouted “Hindustan zindabad tha, zindabad hai, zindabad rahega,” and create havoc at the box office. Things have certainly changed since then! In this age, we have a Bajrangi crossing the border with all earnestness, minus the jingoism.

The messages have changed. And this is a welcome change. Especially on a day when I get to see debates on fresh issues along the Indo-Pak border! So I see a news anchor screeching his lungs out on how Pakistan army has made a joke out of itself by claiming that they shot down an Indian spy drone, while a Pakistani speaker on the show maintained India sent the drone.

Ironically Pawan a.k.a Bajrangi too is perceived as a spy when he enters Pakistan. But that of course is much later in the story. Much before that we see his personality being built up to almost a hulk like proposition – a larger than life hanuman bhakt who would die rather than lie. And this good man takes it on to himself to take care of a Pakistani girl who has managed to get lost in India, and ensure she reaches her parents safely. And he is willing to do “kuch bhi” to achieve that as he has sworn by Bajrang Bali. Hence follows a series of incidents that are so manipulative that you have little option but to clap when the director wishes you to. Some may even shed a tear or two… at least some I know did.

Bajrangi Bhaijaan brings out the message of peace and religious tolerance. And not subtly. But there is no reason to complain.

Of course it is Salman Khan that makes things possible. He smiles, sings, dances, punches, romances, flexes his muscles… with his usual élan. Right from his introductory scene to the last, this one is a bhai fest… But it is also the little girl Harshaali Malhotra who carries much of the films emotional moments beautifully with just her smile as a support. This young actress plays mute, which is why much of the story is possible. But more importantly it is because she comes across as so endearing that Bajrangi Bhaijaan actually keeps you engrossed. Nawaz, Kareena and the rest fill in with their bits perfectly too.

Technically too there seems nothing to pull it back. Superbly mounted the film looks a beautiful and big. The songs work as they do in regular commercial affairs. We could surely debate regarding the requirement of certain songs but Bhai fans would not care a damn. Also, who cares about continuity jerks and logic anyways! Definitely the fans do not.

Kabir Khan’s Bajrangi Bhaijaan is probably the best movie to have released on an Eid, which is followed by the highly spiritualist month of Ramzan. He may have made better films earlier, but Bajrangi Bhaijaan is one of those films he should be proud of for years to come just because he managed to make a film that leave people with a smile as they walk out of the theaters. There is just one glitch… Bhai took off his shirt for one tiny scene, not enough for the Bhai bhakts. Nothing else should stop the film from becoming one of Salman’s biggest.