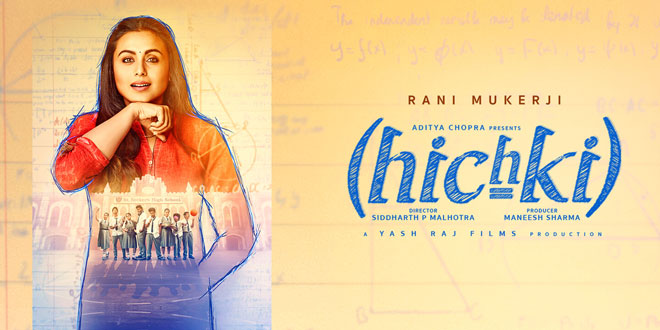 I came across this wonderful movie trailer of the movie Hichki few days ago and have been in awe of the performance by Rani Mukherjee. In this movie, Rani Mukherjee plays the role of a determined woman with Tourette Syndrome who wants to be a teacher. After many rejections, finally one school gives her a chance but they allot her the class of underprivileged students who got admission because of right to education law. I have heard of tourette syndrome before and my knowledge is based on YouTube and ted videos only. I have never actually met someone with Tourette Syndrome. However, I know how extreme it can be and it becomes really difficult to live with it in extreme cases.

I don’t remember watching any Bollywood movie prior to the release of Hichki trailer that used Tourette Syndrome as a central concept. Although, some Hollywood movies like Deuce Bigalow: Male Gigolo used it as a comic relief which was very mean. The movie Hichki seems like it is loosely based on 2008 American Tele drama movie ‘ Front of the Class’ (which is based on the true story of Brad Cohen who had Tourette Syndrome but was a gifted teacher) and 1995 American movie ‘ Dangerous Minds’ (which was a story of teacher dealing with under-privileged Afro-American students) presented with Indian sensibilities. No, I am not taking away any credits from the makers of the movie. We are yet to watch the movie but looking at the trailer, it seems like the movie has a tight script and the issues have been very sensitively handled.

What I like about the movie Hichki is the performance of Rani Mukherjee who acts with perfection. As the movie does not focus on the most common known traits of Tourette Syndrome and deals with an extreme situation, Rani Mukherjee’s character looks very convincing. This is an interesting story and the territory is completely unexplored. It just shows the way Bollywood is changing. This movie can be an instant hit or a complete disaster but it’s really appreciable that Rani Mukherjee took such a great risk. If this movie works, many new movie makers would come with new innovative ideas.

Watch the trailer below:

The Biggest WTF Moments In Bollywood Films of 2017