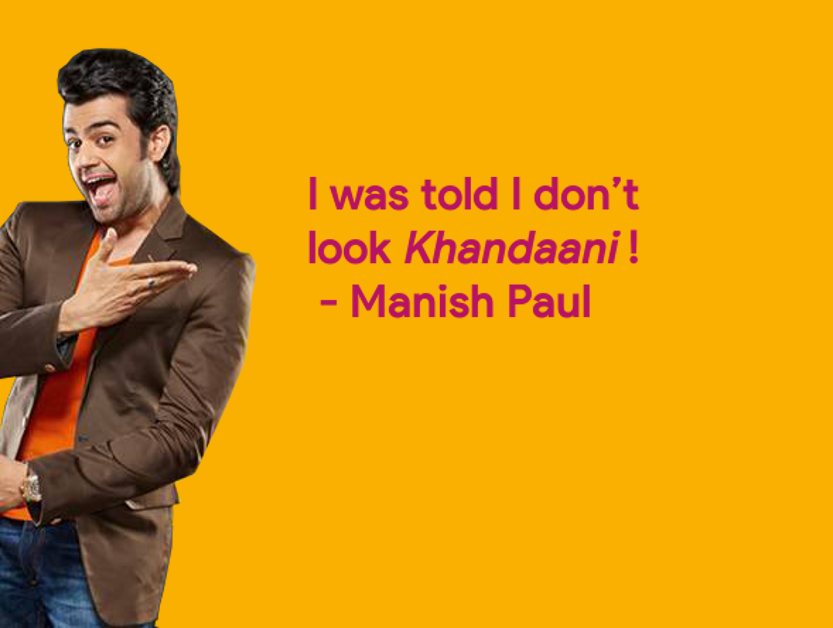 His sense of humour is not unknown. And that is what makes Manish Paul one of the most sought after hosts on television today. Presently, hosting the seventh season of Jhalak Dikhhla Jaa, Manish Paul spoke to us about where he draws his humour from, ten years in Mumbai and more. Read on… You have a fantastic sense of humour. Is it possibly from you Delhi Punjabi genes?

Absolutely. It is a Delhi Punjabi humour. Not just me, my family has a great sense of humour too. In fact every time I feel like I am exhausting my jokes I head home!

And you are known to pull everyone’s leg while on stage. How come no one ever objects!

(Laughs) There was a time in between when people said they were not concerned if they would win the award or not, but how will Manish pull their leg if they win and go up on the stage! Thankfully all are friends so they don’t mind.

You have excelled as a host and RJ. But we believe you did not quite enjoy your stint as a TV actor. Why?

Yes, I did not quite enjoy the stint as a TV actor. Maybe because I had some drawbacks and I really needed better grooming. I don’t enjoy doing something that could be done without my participation. Like when I am hosting I try doing something really good.

We have been told that you have been using the same room for last four seasons of Jhalak. Superstition at play?

No superstition at all. It’s true I have been using the same room. They had given it to someone else once but before I came in they had made it available. It is just that I am comfortable in the room. Also I have always been allotted that room so there is an attachment. And not just for Jhalak. I was shooting for another show once in the studio and I asked for that particular room. I love the room.

It is not just the room. I have been making my entry in each episode of the show the same way for last four years! It has to be with a follow light. It started as a joke. As people would be pretty dull I would wake them up as I walk in. I try and create an energy on the stage! You see, everyone has fun with the celebrities and contestants.  I make it a point to have fun with the audience too. That keeps them interested.  I would just go sit by someone in the audience, crack a joke or two.

What about films? When is the next one releasing?

Tere Bin Laden 2 is ready now. We had redone the film a bit as the director Abhishek Sharma felt it was not up to the mark. I also have Katha, directed by Khalid Mohammad. It is an interesting film.

Tere Bin Laden 2 is an anticipated sequel as the first one was quite an entertainer.  Was it as entertaining working on the film?

It was awesome fun working on the film. The director is very good and has great understanding of comedy. I learnt a lot of things from him. He believes in a lot of rehearsals.  Thankfully the film has come out well and we are really happy! Also, Pradyuman, who plays Laden, is so good! He is the best Laden!

You get to work with really attractive girls. Mickey Virus, Tera Bin laden 2…

And how does the wife react?

She takes it well. She knows the industry I am in. In fact I was required to do some intimate scenes with my co-star Sharmiela Madre in Katha. But wife is okay till the time the scenes are on screen.

Your wife is a Bengali. Have you picked up the language yet?

I understand it. I speak a bit. I in fact make a lot of fun of the language. She asks me why don’t I learn the language. I tell her why should I! People enjoy my broken Bengali.

You have just completed 10 years in the industry. Was it easy to get work?

I got work, got insulted often too. Some people told me once my face does not look Khandani! I would call up my dad and laugh about that. Now it feels good when people come to me and tell me that they like my work.

Finally, would you want to say something to your fans reading this interview?

I always had faith in myself. And everyone should do the same. Anything that you do, do it to the best of your ability.

The interviewer Shishir Goutam is a senior freelance film journalist.