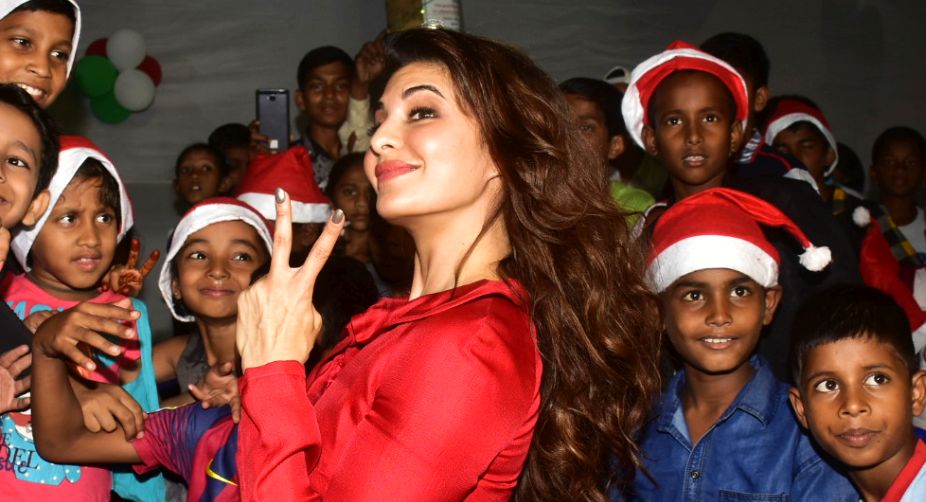 Towards evening on the Christmas day, Twitter saw an interesting trend shaping up. #KanganaTurnsSanta was making it to the India trends. The same resurfaced a day later, as people tweeted about how great an effort Kangana Ranaut has made, as she spent some time with underprivileged children from a well-known NGO. Pictures of the actress in a red gown feeding cake to happy looking kids in Santa caps were splashed across the social media and then across the media in general.

Around the same time pictures of Varun Dhawan and Jacqueline Fernandez appeared, separately, of course, celebrating their Christmas with kids from other organisations. The hungry entertainment media too glad to publish such content, which boosts their readership numbers. Varun had gone back to the same NGO working for destitute children he had visited during Badrinath Ki Dulhnaiya promotions, and he got them school bags along with chocolates. Jacqueline on her part spent her time talking to kids and telling them about the importance of education and waste management – helping kids make Christmas decorations of waste.

Heart-warming indeed! Many celebrities have in the past ear-marked such occasion for a charitable cause – be it kids, or patients of a particular kind. What is interesting however is how these efforts seem to be used to promote a particular image of celebrities – of their human side, of how caring they are and how they give back to the society.

Charity for long has referred to as a great easy image-building exercise. As a justification to the argument, the example of how Being Human, although not by design, has almost become synonymous with Salman Khan’s persona is often cited.

Is this all a façade then? “Of course, the celebs are concerned,’ quips Dale Bhagwagar, known to have worked on the image building of actors like Hrithik Roshan, Priyanka Chopra and Shilpa Shetty. “…about  their publicity!” He chuckles after a short pause. “On a more thoughtful note, it’s incorrect to blame the celebrities for seeking mileage. It’s for name and fame that any actor strives for. After all, what is an actor without publicity,” he adds. Dale also adds that it is not the celebrities that benefit out of such engagements. “Instead of making them look desperate, let’s not forget that in the process, the NGOs also get mileage and coverage. Most of the times, it’s the organisations who chase star managers and publicists to get actors to their events. They are the guys who propose and arrange the meetings. In the end, its a win-win situation for all. The star gets written about, the publicists get their credit of getting mileage for their clients, and the NGOs get to tom-tom about their noble work. What’s more! Even the media gets some social interest fodder,” he adds.

So how does a good ‘image’ work for an actor, if at all? Deepesh Shah, one of Bollywood’s best-known marketing professionals have an answer. “Every action, reaction by a celebrity, specifically an actor, in their personal space has an equal and impactful reaction in their professional space, especially in an age when information is available at click of a button,” points Shah, even as he vehemently denies that actors work on charitable causes just for the good publicity that comes along with it.  Adding to his response Shah opines, “If the question is ‘whether such acts impact an actor’s box office’ you have to understand that just because an actor goes to an NGO his film will score more. It is cumulative of 1o or 20 other things that are being done by a celebrity which impact.”

Ad Guru Prahlad Kakkar has a different take. “I don’t think we should so cynical about these people. Christmas or New Year is actually the time for charity. If not now, when? Give them credit for taking out time from their schedule. Because however publicity they might get, the amount of good that they do is far greater than the amount of publicity they get,” he states. At the same tim, Kakkar does admit that a good image does work when it comes to getting work for celebrities. “If you have a reputation of a good guy, there is a very good possibility that when three-four people are being contended for the same role then you get it because they think you are the better guy. It also works in terms of brands…,” he points, adding, “The brand fit is very important. The image that you have in the market should be the image that a brand wants you to carry. For example, Preity Zinta had a brand of being a feisty, gutsy lady of indeterminate age but she appealed hell of a lot to young people. An image does turn into your entire career.”

Of course, we would like to believe, like Kakkar, that our favourite celebrities indeed associate with charitable causes because they genuinely care and want to give back for the love they receive. Having said that, the cynical questions shall possibly always survive.