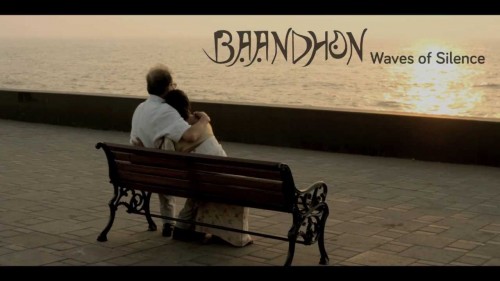 ‘Hkawni Kutir’-the house which held myriad memories of an old couple’s existence beautifully portrayed by Bishnu Kharghoria and Bina Patongia. The walls of the house echoed with their innocent love through their innumerable spats. The biggest witness of the happenings of their lives was a lawyer and their ex-tenant Jatin played by Jatin Bora along with his wife Ranjana played by Jerifa Wahid. The only ray of hope in the couple’s life was their grandchild whom they lovingly called ‘Pona’ who was studying in IIT Powai. Baandhon unfolds the story of common men getting trapped in the tyranny of terrorism, how their priceless dreams and naïve smiles are drifted away with the winds of hatred.

Jahnu Baruah like his all other movies, was able to depict an intense story in a very subtle way. It is a movie with very few characters and all actors justifying their respective roles completely. Jahnu Baruah delivered a story to which every common man will be able to identify oneself. He again proved himself to be an intelligent filmmaker with a strong script and meticulous direction. The dialogues were apt and added the right amount of humour and emotions wherever needed.

Cheragh Todiwala did a nice job in editing and presenting to the audience a smooth running story with equal amount of drama for both the intervals. The film is shot with the Red camera of Suman Duwara. Though there were no songs in the movie but the background score of Dhrubajyoti Phukan gave full gravity to the story.

This 110 minutes long movie truly fits into the style of Jahnu Baruah’s immaculate direction. It is able to make the audience stick to their seats and enjoy the dramatic slideshow. The first half of the movie gives all the humour to the audience to get ready for the second half’s nerve-chilling drama. The cast and the crew have done fair justice to their respective roles to bring out an incredible story. Like any other Jahnu movie, Baandhon gives a deep insight to the life of any simple human being. This ‘waves of silence’ leaves a lot of question marks in the audiences’ minds about the harsh realities of life.

Overall, this 9.0 IMDb rater gives a roller-coaster ride back into the happenings of the 26/11 terror attack of Mumbai which left so many lives meaningless and so many dreams shattered. It’s a must watch for the audience who loves to watch an ordinary story told in an extra-ordinary manner. Baandhon is a boon to the Assamese film industry with its bag already filling up with numerous awards.