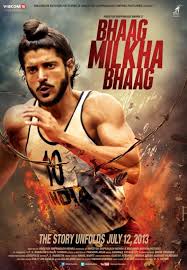 Bhaag Milkha Bhaag is more than just a tribute to the legendary Milkha Singh. It is not simply a story of how he achieved stardom but it also teaches the viewers how one can overcome one’s fears and leave behind a macabre past. It also proves those axioms that say hard work pays off and that determination and focus are keys to achieving success.

The movie commenced with the epic scene of 1960 Olympics at Rome where Milkha failed to win the race for some reason that appears to the other characters in the movie as a “silly mistake”.  We, the audience, are shown the emotional turmoil our protagonist is going through and the first impression built in my mind was “hats off to the cinematographer”. The director of photography, Binod Pradhan has indeed done justice to the movie.

The three hours long movie didn’t seem as tedious as it sounded at first (Of course company matters, but the movie wasn’t a bad company after all). For those who watch movies not only for entertainment but also to return home with a larger view of life and/or enlightenment, BMB is highly recommended. Of course, not everyone will be able to bear through a movie with some minor so-obvious incidents without much suspense, but overlooking the minor flaws this movie is one that will remain in the viewer’s head even long after the movie is over.

The story of ambitions, love and reasons was well directed by Rakeysh Omprakash Mehra, exploiting Farhan Akhtar’s versatility and skill. Sonam Kapoor and Rebecca Breeds play characters who have affected Milkha Singh’s life; while one was his reason to leave his petty way of living and joining the Indian Army, the other one was his reason for losing concentration and focus in his career.

Other impressive performances were by Prakash Raj, Pavan Malhotra and Yograj Singh playing influential characters that have made Milkha the man he is now. Divya Dutta plays the athletes elder sister who lovingly becomes like a mother to the latter when they leave their village during Indo-Pak partition. A scene where she is sexually assaulted by her husband invigorates terror and disgust in the young Milkha, as well as the audience, and becomes a small turning point in building Milkha’s character as a rebel. Young Milkha is well played by Master Jabtej Singh, winning the hearts of the audience with his innocence and charm.

Dalip Tahil, however, plays the role of Pt. Jawaharlal Nehru and unintentionally makes the audience laugh and giggle – something that could have been avoided to make the dialogues more effective.

Prasoon Joshi does a commendable job with the script that portrays the emotions well and makes you enjoy the show.

In a nutshell, the movie is a must-watch for those who are willing to sit for three hours experiencing a saga of perseverance, aspiration, love and terror.