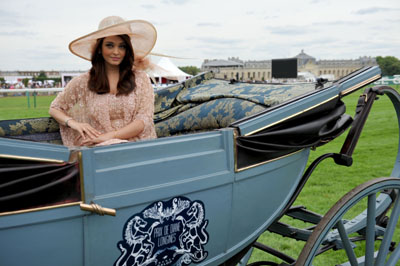 Ash effective as it gets!

So Aishwarya Rai Bachchan is pregnant. And the whole country seems to be discussing about it, giving her a new found star status.  I fail to recollect the last time she gathered as much attention. Her last film, another effort with her husband Abhishek Bachchan, was the ill fated Raavan. Not that they have not had successful collaborations – Guru is an example – this child certainly will remain the most talked about partnership.

Funnily this partnership has suddenly hijacked quite a few other plans – a case of reproduction stalling production! The most prominent being Heroine, the film that Aishwarya was shooting till her family declared she is five-months pregnant. The shoots of the film were just into the second week and the Bachchan family says that Ash could very well shoot for the film, once the director removes the ‘unnecessary’ scenes. However the producers are confident that Ash can’t be their ‘heroine’ anymore! Naturally money is lost and quite a few crore for that matter – money that will just add to the budget of the movie, which in turn affects the recovery on investment. Heroine for now is stalled, till another worthy actress takes over.

Ladies and Gentlemen is another film which has lost its lady. The film which was to star Abhishek Bachchan with his wife will probably have to go girl-hunting. The director Rajkumar Santoshi apparently admitted that his eyes are now fixed of Preity, who is suddenly pretty busy starting her own production house.

Yet another director whose hopes to cast Ash dashed is Soham Shah. The guy who last directed Luck seems to have gone luckless as he tried chasing Ash to play the lead girl in his remake of Satte Pe Satta. With Ash unavailable and hero Sanjay Dutt willing to work only with her the film is stuck. Unless Vidya Balan accepts the film, and the fact that she was not the first choice of her hero who is also the producer!

In the meantime fingers continue to be raised about how a 38-year old actress could not figure out that she is pregnant well into the fourth month when she started shooting for the film. Accusations and gossip fly… as does muck. In the meantime she steers clear with declaration that she is still as much in demand by signing a film with Viacom 18, which she will shoot end of 2012. UTV, producers of Heroine, however seems to have become wary of a married actor. They are apparently fixed on putting an anti-pregnancy clause in contracts that they sign with heroines in future. Only goes further to prove how important Ash’s pregnancy is in Bollywood history! Strangely such a thing did not happen when Madhuri Dixit got pregnant mid-way through the shoots of Devdas. Or for that matter when Kajol turned pregnant during the shoots of We Are Family. Of course both Madhuri and Kajol went on to complete the respective films.