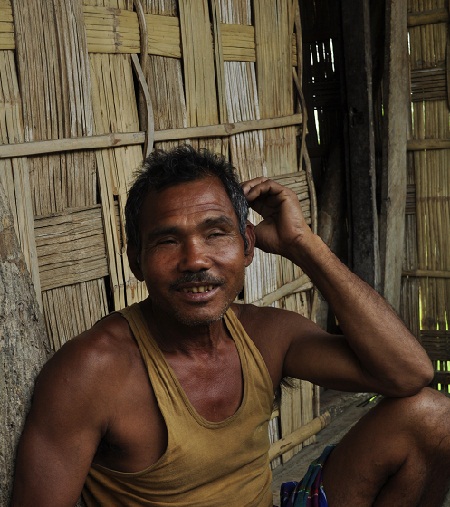 He loved trees. He still does. He always will.

That exactly is the message he conveys when you come across him. Jadabh Molai Payeng – the forest man, the man who built a forest singlehandedly , various names that suggest only one thing : the man who had a deep relationship with nature. A completely unassuming person, he is not even aware of the magnitude of his accomplishments, nor does the numerous accolades bestowed upon him impress him much, specially if it comes between him and his beloved trees.

“I find it very difficult when people call me during May-July. This is the time when we plant trees and is very precious for my work. People really do not understand me.” He had lamented thus about having to go to Mumbai for the award ceremony, coming July.

I came to know about him in 2003 while I was on a Photography trip there. At that time, I was not so much into  story telling and so I remember mentioning him only to my Mother back then.

When Sangram Gautam asked me if I could accompany him to Kokila Mukh in search of this man, I immediately said ‘yes’ even in the midst of my busy schedule. 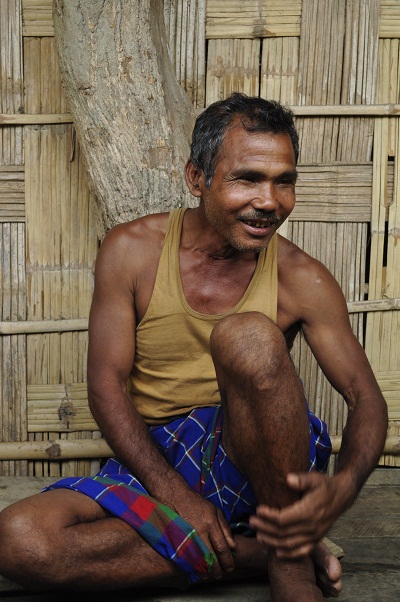 Early morning when Sangram called me and asked what to do next as it was raining and his phone was not reachable either, I simply said, “Today is the time when we can find him in his home and we should go.”

Taking an appointment with him is difficult as his phone is always out of reach. Either he is in the Molai Kathoni or he has kept his phone on charge at someone else’s home. He doesn’t have an electricity connection you see.

He lives in a typical chang ghor that one sees in Miri villages along the Brahmaputra.

I was right. We did find him …and the meeting was a total treat . It wasn’t a formal interview or a chit chat. I just enjoyed watching him speak, being interviewed by Sangram and hearing him narrate his stories…

Payeng’s forest, yes for once I will call it his forest, named Molai Kathoni was in Aruna chapori, a sandbar of Brahmaputra river , a few kilometres away from Jorhat., Molai being his nickname given to him affectionately by the villagers.

The story of how it started was nothing different from how a success story usually starts for those who have passion for something or other. He loved nature. He loved trees. It amounted to something as simple as that. But what made it amazing was the reason that made him pursue his passion so doggedly. Nothing. Yes nothing. There wasn’t an end to his vision. There were no expectations of a result. He just went on planting trees and more trees and his happiness grew just at the sight of the lush greenness of it all. If you had asked then – ‘what next’, his answer would have been – Trees. And the interesting thing is that his answer still is – Trees 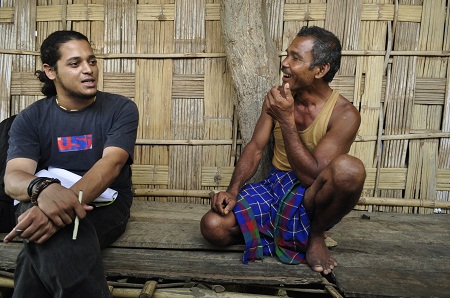 The story as you all might be aware of (as it has been carried in all the major dailies) began when he joined the tree re-plantation scheme of the Golaghat divison of Forest department as a labourer in order to combat the devastating effects of erosion and floods way back in 1979. The scheme was completed successfully , but Payeng stayed back and continued with his own scheme and started planting trees on his own in the area which now is supposedly the biggest forest in the middle of a river.

It houses not only trees, but is quite a mini sanctuary  being home to tigers, rhino , deers and numerous birds, while Molai enjoys to reside nearby as a keeper and a guardian and also the creator.

His feat has been brought to the limelight by many reporters and film makers, one of them being the famous British filmaker Tom Robert. He has been felicitated and awarded by other organisations, but ironically he has hardly received any financial aid to create the forest from the state government, not now- not even then when they came to know about him. The only words of encouragement he had received initially were from the forest department and some saplings that were provided periodically , to further his passion.

He candidly remarked – ” Chief Minister Tarun Gogoi congratulated me, but is that enough?… Animals don’t need us. We need them… It is beyond my scope to work beyond a limit”

He shrugs it off with another of his gem of a remark- “ The Govt. is creating Dhoods (Lethargic People) by providing people with 2 Rs. Rice and Athua (Mosquito Net). But the workaholic don’t have time for that and work hard to end up buying the 20 Rs. rice and Athua” The forest is the only reward he relishes and the only he sincerely desires.

Life in the jungle does have its moments of awe . Payeng narrates an anecdote about an aged elephant, who came to Payeng’s place at the time nearing its death, as if to bid goodbye. Though the forest department tried to save him, they couldn’t. Those few days when it stayed there, tranquilized, three elephants used to come daily with food for him.

Certainly the jungle does have a life of its own and its own laws and it is people like Payeng who respect and nurture it, who are rewarded in the long term by nature herself.