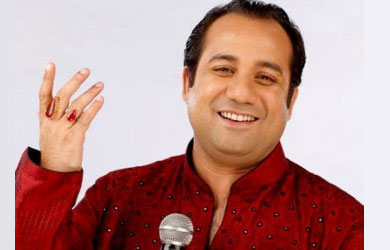 Maestro Ustad Rahat Fateh Ali Khan has signed to Universal Music India for the release of his long awaited album ‘Back 2 Love’.  The album, his 4thand his first in 7 years will be released globally on June 9, 2014.

`Back 2 Love’ is a stunning collection of 10 soulful melodies that will enthrall audiences, both new and existing. The album includes collaborations with prolific Indian musicians including the music composer brother duo Salim- Sulaiman and a duet with the talented play back singer Shreya Ghoshal.

It must be noted here that the Ustaad of `Qawaali’ and `Sufi’ music, Rahat has an envious list of Bollywood hits to his credit including “Sajda” (My Name is Khan), “Teri Ore” (Singh is King), “O Re Piya” (AajaNachle), &“JiyaDhadakDhadak”(Kalyug) to name a few amongst his poignant works that have always tugged many a heart strings. This time round too, the world renowned musician is all set to mesmerize with his 10 new soulful and heart rendering compositions from `Back 2 Love’.

Says Rahat Fateh Ali Khan on his signing to Universal Music and his latest album, ‘I am excited about my signing with Universal Music Group and look forward in creating magic with “Back2Love” as it is perhaps my best solo effort so far. I feel honored being part of a label like Universal Music as it represents some of the top most artists in this world. I look forward for a long lasting musical relationship with UMG and thank my Producer Salman Ahmed and Universal Music’s Devraj Sanyalfor putting this deal together’.

Adding an Indian feel to his compositions is the much in love couple of `Big Boss’ fame Gauhar Khan and Kushal Tandon who feature in the music video shot for the lead track “ZarooriTha” that will break closer to the album release date.

Says Devraj Sanyal, Managing Director, Universal Music / EMI Music, South Asia, “We are extremely proud to present the work of a legendary artist as Ustad Rahat Fateh Ali Khan. Khan’s works being an inspiration and solace to many, have always been looked forward to by avid music lovers the world over. His new album `Back 2 Love’ is an all new extension to his already prolific body of work and is definitely his best work yet! Needless to say, we are rolling out a red carpet plan for this brilliant new album as we are confident of its impending success! We will ensure that this onereaches out and touches millions of hearts worldwide!”

`Back 2 Love’ will be released across physical and digital formats worldwide on 9thJune`14 exclusively on Universal Music.

Mumbai gets a sparling floating hotel