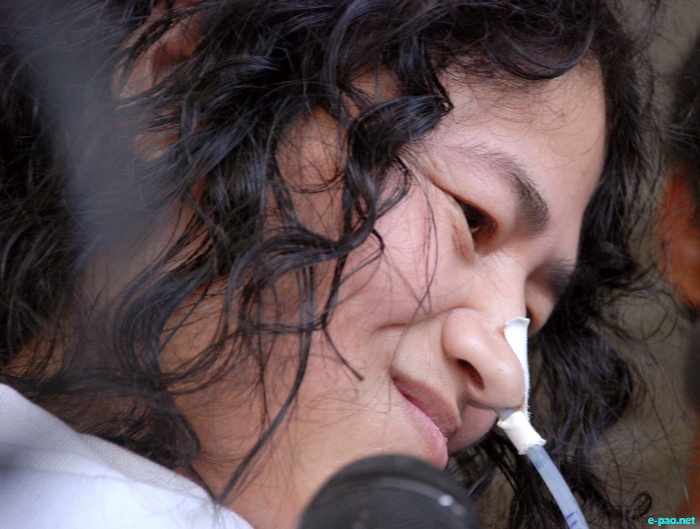 On 2 November 2000, in Malom, a town in the Imphal Valley of Manipur, ten civilians were allegedly shot and killed by the Assam Rifles, one of the Indian Paramilitary forces operating in the state, while waiting at a bus stop.The incident later came to be known to activists as the “Malom Massacre”. The next day’s local newspapers published graphic pictures of the dead bodies, including one of a 62-year old woman, Leisangbam Ibetomi, and 18-year old Sinam Chandramani, a 1988 National Child Bravery Award winner.

Irom Sharmila Chanu. also known as the “Iron Lady of Manipur” or “Mengoubi” began to fast in protest of the killings , to demand that the Indian government repeal the Armed Forces  (Special Powers) Act, 1958 (AFSPA), taking neither food nor water.On 6 November 2000, three days after she launched the strike, she was arrested by the police and charged with an “attempt to commit suicide”, which is unlawful under section 309 of the Indian Penal Code, and was later transferred to judicial custody. With her determination not to take food nor water, her health deteriorated tremendously; the police then forcibly had to use nasogastric intubation in order to keep her alive while under arrest. Since then Irom Sharmila has been under a ritual of release and arrest every year since under IPC section 309, a person who “attempt to commit suicide” is punishable “with simple imprisonment for a term which may extend to one year or with fine, or with both.Unfortunately, at that time, Irom Sharmila’s crusade against this draconian law didn’t gather much publicity from the media outside the state, mainly because it is from the North Eastern part of the country. The government of India has always been accused of step-motherly treatment towards the states and suppressing the media from reporting any atrocities that take place in that state. Much as they tried, the police and the government couldn’t break Irom Sharmila’s spirit.  Every time she was released, she would go on a hunger strike and get rearrested. Eventually, Irom Sharmila’s efforts began to get recognized by the media in other parts of the country in 2004 and she became an icon of public resistance. On October 6, 2006, after a procedural release, she gathered human rights activists along with other concerned citizens in Delhi at Jantar Mantar. She was promptly arrested by the authorities for attempted suicide and admitted to the All India Institute of Medical Sciences. She wrote to the Prime Minister, Home Minister, and President requesting them to at least modify the AFSPA, if not repeal it. However, there wasn’t much response from the government. Today, Irom Sharmila is the world’s longest hunger striker, not having consumed food or water for over 11 years. She continues to fight and has vowed to continue her strike until the law is at least modified.

“There was no other means to stop further violations by the armed forces against innocent people. I thought that peace rally and inquiry commissions would be meaningless. Unless I do something to change the situation.” – Irom Sharmila Chanu

Wake up
————
Wake up brothers and sisters
The savior of the nation
We have come out all the way
Knowing we all will die
Why the fear is
So shaky in the heart?
Yes, myself too
In the impact of this hard step
Overwhelmed with anxiety and fear
With the prayer to almighty
Praising the spirit of truth
Touchily from this frail body
I am bidding farewell
Yet longing for life
Though birth is followed by death
So fond of to accomplice
My desired mission

Tonight
————-
This adjoining night of two centuries
I hear all heart touching sounds in my ears
Thee, the beloved goddess, called time
Your poor girl is stirred at this hour
This late night makes me so restless
Cannot forget the world of captivity
Those shedding tears
When birds flap their wings
Those asking
What this walkable legs for?
Those sayings
These eyes are useless
Oh Prison! you go just vanish
So cruel is the strength of yours
Of iron bars and chains
Tear many a lives untimely

My hands be given to you
Dear friends
Greet me please
Very anxious I am
Want to show inside and outside
Words are too poor to express
May voice of ordinary
Of a flavorless smile
Yet wanted to have
The fuse of a bomb
To burn out all the dirt
May some costless tears
Yet wanted to glitter
On every single face
In the light of new epoch
May the step be of single
Of no strength
Yet wanted to make
The impression of hundreds on
To transform it into
Magic spell of courage
Open the door
Come out
Since possessing head and mouth
So hard to move on !

How to evade getting fooled on Fools’ Day