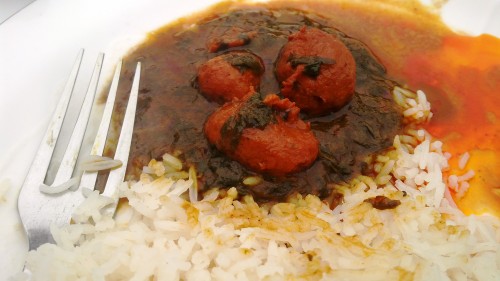 Rogan Josh and Naat Yakhhn A Tribute to Wazwaan

A trip to wazwaan was an unforgettable journey for me and my friend Manipadma.  On reaching the venue, we both wandered a while awed a little by the lavish, extravagant and splendid layout in the midst of a green landscape. The initial few moments were spent meeting people from different arenas of profession, who had gathered that day with a sole aim – to experience the treasured Kashmiri cuisine! We basked at the warmth and enthusiasm of the organizers and the people associated with the group called The Delhi Gourmet club whose aim was to experience and promote the exquisite cuisines from all over the world

The Delhi Gourmet Club members and Rocky Mohan, the host for the Wazwaan were frequently seen and heard discussing the uniqueness of Kashmiri dishes at food forums. So when that fine day we got a chance to experience it, we did not let it pass. And what did the venue have in store for us? A midst the array of pristine white table spreads lay one of the most elaborate and enchantingly spread dishes I have ever seen. It was no surprise that the culinary delights were much awaited by the guests, buzzing and talking in low tones. The chirpy expectant happiness of a gastronomic extravaganza filled the air. In one corner, wine connoisseurs were found soaking in the ambiance while practicing the finer nuances of wine tasting; on the other side the fashionistas- ladies clad in wintery couture engaged in gup-shup. Rich aroma filled the air making dull winter glow with brimming happiness.

The vasta waza or the head chef, Shafi was never tired of explaining the dishes. “36 courses comprise the wazaan, which was introduced here in the 15th century during Timur’s invasion to India” he said. Shafi, whose ancestors had brought the tradition of Wazwan from Samarkand, remarked that the Wazwan set in the Trami (a common dish from where the partakers share)is a practice which projected the noble concept of ‘everyone is equal before the Supreme one’.

A cursory glance on the menu card excited me. It was a banquet in itself. It comprised both vegetarian and non-vegetarian dishes. The list was impressive and consisted of Kabab, Kookar Kanti (shallow fried boneless marinated chicken pieces), Maaz Yakkhn (mutton cooked in curd with fennel and dried mint), Palak Rista (hand pounded mutton -meat balls cooked in spinach), Hindi Rogan Josh (saffron and kasmiri red chillies flavoured mutton coloured with mawal), Chear Kufth (minced meat koftas with dried apricots), Marchwagan Korma, Badam Korma and Gushtaba (large hand pounded meatballs served at the end of wazwaan). I was told that Kashmiri dishes are heavy on lambs and muttons and never included beef in keeping with the religious sentiments of their hindu friends and neighbors which came as a pleasant surprise. (not because of the absence of beef, but because …well , some ties can never be broken…)

Each item on the list stood time, history, age and perseverance. The dishes were in itself a culinary journey withstanding the age-old tradition melted in gamut of cultures from the Western Himalayas and beyond. Shafi, the head chef proudly admires the centuries old hereditary wellness of preparing wazwaan by his forefathers once served from the royal kitchens.

As we sat preparing ourselves to experience the Wazwaan, Kehwa was served. Qewah or kawah is the flavoured green tea infused with saffron and crushed dried fruits of almonds and walnut. Served throughout the course of wazwaan, it awakened the taste sensation in between the rich meaty dishes. Served in tiny shallow wide rimmed cups the colour was appealingly fresh. The yakhhn, a lamb based dish with rich yogurt gravy was sophisticated enough to give a jolt to senses. The boisterous flavor was more enriched when taken with batha, plain white rice. The combination of both these items fused into it a wholesome flavour. 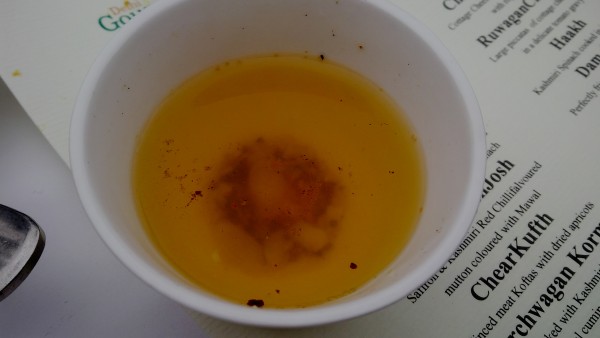 Kehwa at the Wazaan (photo by Sanzeeta)

Came next was the Palak Rista, exuberantly made hand pounded mutton balls flavoured with cardamoms and spinach. The combination of the rich colour of bright hues of the meat balls leisurely played in the smooth greenish gravy. Another pick that mesmerized me was the Gushtaba, a dish made of pounded mutton meatballs in fine consistency of yogurt. Nothing could compete with its composition. Each item at the wazwaan rolled out on the plate one after the other was a delight and an experience in itself. One could find the complete balance–in- combination of aroma, texture and spice mix. None of the spices dominated each other and seemed to be defining each dish appealingly in different flavor blends.

What intrigued me about the lavish wazwaan, was the beautiful recipe book launched at the event –Wazwaan: Traditional Kashmiri Cuisine, a valuable compilation of very authentic Kashmiri recipes from the valley which had secret recipes of the waza repertoire. It is one of those recipe book which one would like to hold close to the bosom. It is timeless and acquiring one such was the icing on the cake replete with the autographs of both the Authors – Rocky and Shafi.

This issue we bring you two treasured Kashmiri recipes – the famed Rogan Josh and the Yahhn.

Rogan Josh: The original recipe from the valley 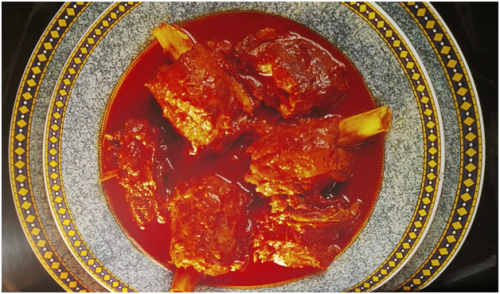 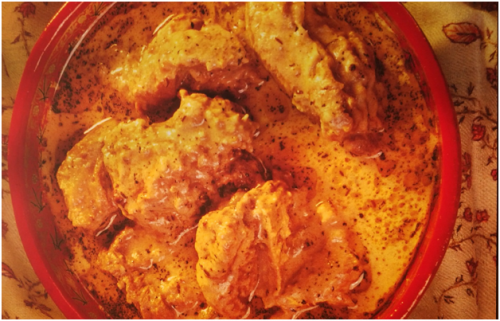