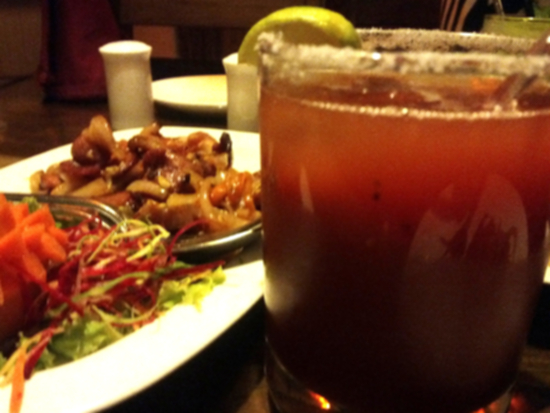 Nagaland Kitchen, with a tinge of urbane-rustic touch was pleasing and quite a preferred treasured joint for N-E India’s flavor. With neatly arranged bamboo partitions and illuminating lamps saddled in bamboo lamp-shades, must say, every nook and corner of the restaurant was prim and proper. The immaculate wall frames depicting cultures from Nagaland and the live band at the corner, lightly jostled our senses. As for the menu card, they were neatly framed with lot of items to pick. With so many choices, we decided to go for very few authentic ones.

What looked attractive was the NAGA CHILLY Bloody Mary. My thoughts rolled over torturing myself with peppery burning tongue and fiery heat shooting out off the ears. Did I sense it correct? Got to try it out!  Without leaving any choice, closed the evening deal starting with it. Taste? Cool! Fiery hot? No. not much!! No oral pain inflicted on my sensitive taste-buds. Proven! The aroma of the raja mircha (local chilly from Nagaland) floated above the thick consistency of the drink. One sip and it slightly tweezed my lips but went-in hitting the throat. I could feel it…right there slowly gushing inward. Alright bearable it was. Chilies are good for metabolism I thought and kept sipping feeling quite flamboyant! eh!

The other dishes were SMOKED CHICKEN and SMOKED PORK, quite temperamental huh!. Not too much of sweet and salt and neither was sour. Both dishes with its smoky zest were sanguine delights. The sliced meat pieces gave an amusing countryside charisma along with colourful thin frills of vegetables. The smoked meat pieces were tender and kept slightly aromatic.  It blended well with the urban taste and more so with the glassful of bloody mary, it was an enthusiastic trump! The happy gorging apparently did not leave an assaulted stomach too. 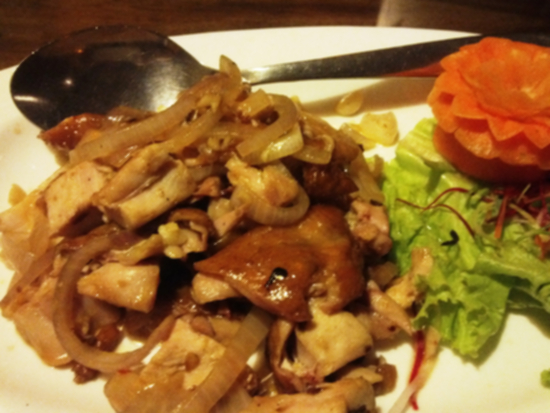 One dish to appreciate was FISH cooked in DRY BAMBOO SHOOTS. With plain rice, it was a combination to go for mouthfuls. I guess the Nagaland’s Kitchen knew to tenderize the aroma of bamboo shoot. Although bamboo shoots are unique ingredients from North-East India, some of us are averse to its harsh aroma. But the fish dish was rather addictive with low punches of flavor making it interestingly desirable and more relishing. We quietly slurped it off with rice and a bowl of soupy pork curry making us whirl into the wilderness. Next time straight to the Nagaland Kitchen, we decided.