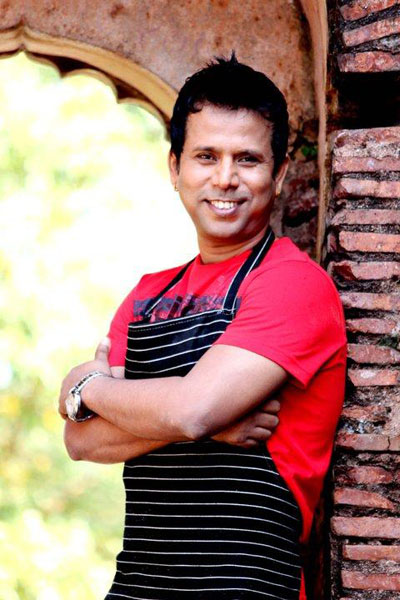 A Moment with Chef Atul Lahkar It was indeed a pleasant moment with Chef Atul Lahkar, who brings his vision of art to the table. Witty and sharper than a knife, he exuberantly soaks up every word he speaks on food with versatility. A dedicated trendsetter of traditional food recipes and with talent unmatchable, he has brought Assamese food in the menu of fine dining. The chef’s restaurants, Khorika, King Chilly have become a rendezvous point for food connoisseurs for his enticing recipes.

‘Healthy, unique, and tasty’ is how Atul Lahkar describes his food creations. With profound affection he portrays his food as ‘sentiments and identity of society’. For him, food is a cultural symbolism of understanding social relations, kinship and heritage. Jolpan is associated with kheti-pothar (cultivation and field), he quickly adds letting out his bundle of thoughts on indigenous festivals in Assam associated with food. In an era of obsessed dining on pizzas, momos and burgers, Atul Lahkar’s creations stand out with interesting and alluring flavors made with local ingredients. In an aim to preserve identity, and to keep the connection between the food eaten and the land it comes from, he uses local ingredients, aromatic herbs and xaak pasoli (vegetables) with unique characteristics. On enquiring on what would be the uniqueness about ingredients, he promptly answers ‘it has all to do with the soil and climate that defines their unique properties which is not found elsewhere like the Joha saul’ (a variety of aromatic rice, not basmati). His enthusiastic collection of pictures on locally available herbs like nal tenga, bor manimuni, dhekiya, kalmao shak, morapator shak, bhrami, tengamora, dorun, bhedailota, turmeric leaves, thereka, bet lota, tajik, pita paleng, madhusuleng, masandari etc. form part of his invigorating and zesty flavours in his recipes. His passion to understand food has taken him to inaccessible interiors of North-Eastern states and exploration into an insightful journey of indigenous recipes exclusively known to few tribes. Being inquisitive, he had always been open to learning by watching, taking part in cooking and understanding food of many ethnic societies. His journey with Assamese cuisines started when he realized he was unable to identify and connect with food he was preparing that belonged to different region. ‘If I’m unable to understand and be familiarized with what I make, how would others? It was a wake-up call for me, to endeavor in Assamese traditional food which expresses deeper values and beliefs,’ he says. His creativity on authentic traditional recipes are relished food-tales in distant lands. His traditional way of cooking in three prominent flavours, tenga, jola and meetha (sour, hot and sweet) have made a niche in echelon of fine cuisines. Affirmatively, he says, ‘Chinese cuisines and Mc Donald have dominated the world, why not us? I love my society. Since 15 years, my sole objective has been in promoting the uniqueness of our cuisines. Chinese food is known to world why not Assamese food?’

His adventure with food started in 1994-1996 with no professional qualification. Initially, although quite unsure about his culinary career, he did not allow his romance with food bury deep inside him. With innate qualities on precision of food crafting and food as hobby, he self trained himself to learn the art of culinary skills. He cherishes his moments with his sister during her treatment in Chennai, when he used to sprint-up volunteering in a nearby restaurant where he made many early morning trips to learn South Indian foods. Atul Lahkar‘s concept of healthy recipes are not about strict nutrition philosophies, rather, they reflect nutrition basics and are prepared in a way that leaves the diners feeling light and appetizing. His choice on selecting nutritional ingredients is locally available herbs with medicinal properties cooked in traditional techniques and with less spice. He says 70% of ahar (food) is steamed, smoked or boiled. His volume of collections of recipes offers a compilation of flavourable recipes using many fresh ingredients. One of his major ingredients is the nutty flavor of black sesame seeds paste. His exploration to understand food habits of indigenous people brings insightful knowledge on the use of black sesame in coking by many tribes like Karbi, Tiwa and Khasis. For an appealing sesame based dish, he applies the trick of combination of raw turmeric and black sesame paste and the  additive component of a spoonful uncooked mustard oil at the end when the dish is about to be done. Ramsay Gordon, on his visit to Assam, was amazed with one of his creations with sesame paste. ‘How could you make the black stuff turn green’ he inquisitively asked Atul. Delightfully talking on ingredients used, he mentions bamboo shoot as his special ingredients. Endogenous to Assam, bamboo shoot grows abundantly and are consumed in dry texture, raw, fermented form or even boiled. He mentions that bamboo shoots do not form an indispensible part of kitchen in households in lower Assam as they  believe that cutting off tiny baby bamboo shoots is to destroy a bamboo. On its use as an ingredient he applies them to balance the flavor and avoid making it as a dominant aroma.

As a chef, it has been challenging and rewarding to work with delicacies and food. Chef Atul Lahkar with his wealth of traditional recipes is currently expanding his reach towards India’s metropolitans to revive and give a new meaning in dining Assamese cuisines. We are looking forward to seeing when they open. Fried Eye team wishes you Good Luck! in your  endeavour.

Glimpses of dishes by Atul Lahkar Tekeli Pitha (steamed rice cake) . I tried as fast food with stuffed chicken with steam rice. The challenge was to keep the pitha moist- Atul Lahkar