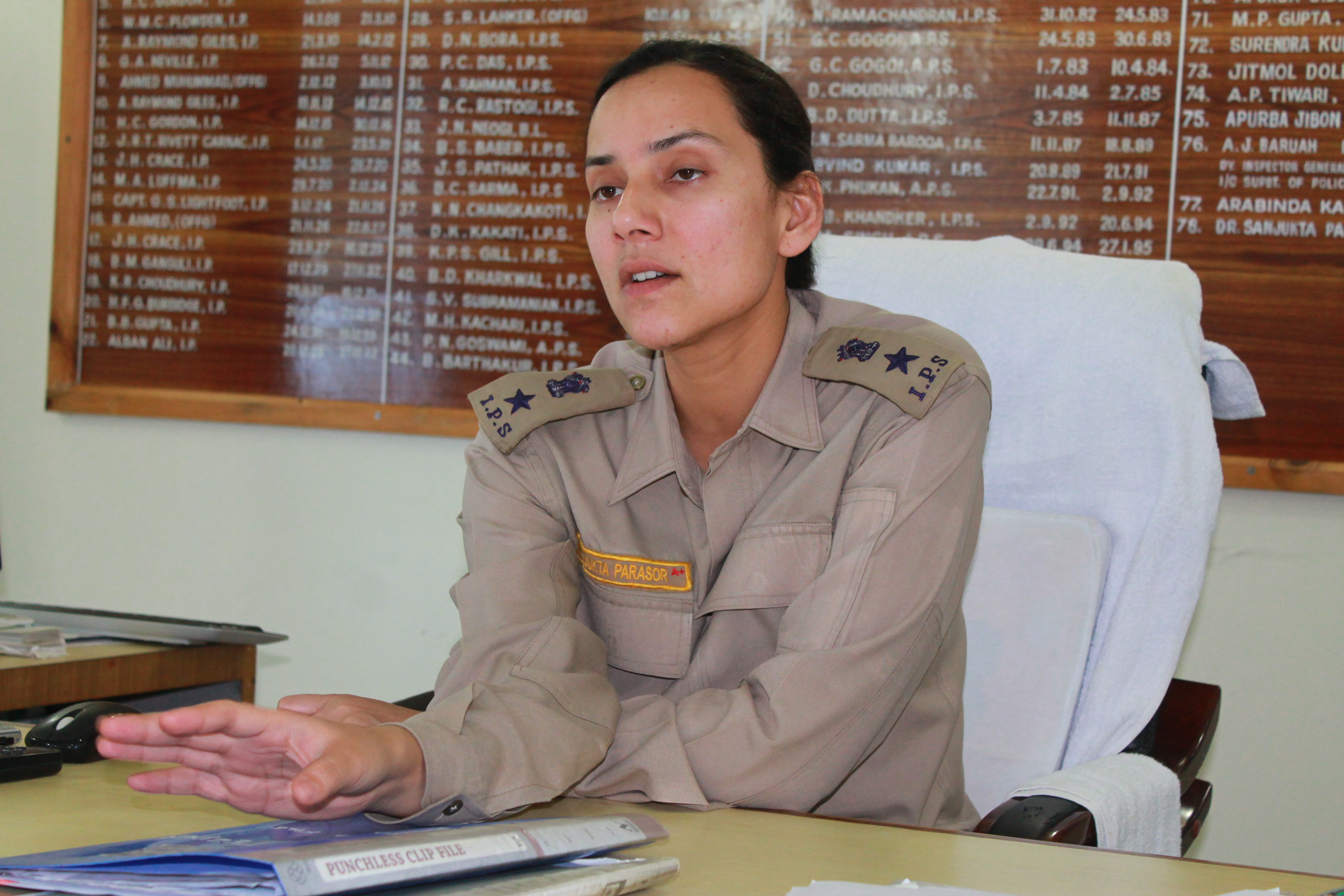 Cases of crime against women in Assam get reported, not ignored! says Sanjukta Parashar

She is a mother. She loves reading comics. She is as fun loving as any other woman. She is also one of those dynamic, young Assamese women who have been able to mark a place of their own, that too in a field that is otherwise largely male dominated. The first female IPS officer to be posted in Assam, Sanjukta Parashar is the perfect epitome of a strong, independent, bold and beautiful woman. Presently posted as the Superintendent of Police, Sonitpur, Sanjukta has throughout been an ideal example to follow for the women in the state. On the occasion of International Women’s Day, Tinam Borah and Prasanta Mahanta from the Fried Eye team caught up with Sanjukta for a brief interview. Here are excerpts of the conversation.

Fried Eye: What, according to you, are the reasons behind the growing rate of crime against women not only in Assam but in the whole of India altogether?

Sanjukta: Rate of crime, as in like, how you would want to define it, is one thing. Last year I did a statistical survey with another two officers- one in Andhra Pradesh and one in Uttar Pradesh. We have submitted that paper to the Bureau of Police Research and Development. What we have found in that survey was that over the years, the rate of crime is still the same. Compared to the total crime, the rate has not changed. Only sheer numbers have increased. In Assam also people keep saying that there is a huge number of cases of crime against women, but the thing is that in Assam, cases actually get reported. Some of our colleagues from outside often find it interesting that women here move around the whole day very freely, even in the evenings and also the fact that they come to the police station very freely too. Nobody is really scared to come out and file a case. On a different note, crime against women is a sensitive subject. Especially because women are considered to be the weaker section of the society; to a large extent they are marginalized. We have seen the many shining examples of women who are independent and free. But there are a large number of women who do not live under those circumstances. So, therefore, this thing has to be dealt with very seriously. For crime against women there are essentially two things- one is prevention and the other one is investigation. Preventive strategies and investigative strategies and techniques which have come out these days, we have to employ everything here, so that even if the rate of crime doesn’t go down, at least we can investigate and bring the person to book.

Fried Eye: Do you think women should be encouraged to opt for self defense as a solution to save themselves from crime/violence Sanjukta: I think more than anything else, education of the men is important. Because most of the crime against women are perpetrated by men, as we find in our own crime statistics. So, more than self defense or protection, it is the education of men, the sensitization of men that is more important. Because, women and men are going to live together, in the same society. You can’t really go on protecting the women inside her house and not allowing her to go outside. She has to go out. The world has changed. Similarly, self defense is good. But it does not really solve the purpose. And ultimately of course, the police have to take up preventive measures. We are the state and we are supposed to protect. That is why the state has been created, that is why the government exists. Otherwise, you know, every man would have been for himself.

Fried Eye: On your part as an IPS officer, what steps have you taken to curb violence against women in your area of jurisdiction?

Sanjukta: Violence comes in many forms. For example, eve teasing is a crime against women. For that, in all the schools and colleges, I have deputed police party in uniform as well as in civil dress. So, anybody who does that is always picked up. That has kind of reduced eve teasing to a large extent here. In Jorhat I had done it in buses also. In Sonitpur also I plan to do it soon- placing women constables in public transports. Regarding domestic violence, what we do is, we have our VDP (Village Defence Person) employed every area. We sensitise each one of them, we even have VDP meetings and medical camps which are done every day in every police station area. We share our phone numbers with them, so that whoever has any information regarding domestic violence cases, can inform us immediately. After that, we try to settle it down by counseling, or if they need any special help we are there. And if the crime has been committed, we try to ensure that the case does not go unregistered. As for registered cases, we have a proper monitoring system; all senior officers also look into these cases seriously. Lastly of course, my office is open and free for everyone. People do walk in and give us additional reports as well, on the basis of which we take action.

Fried Eye: What, according to you, has been your major achievement (in terms of bringing changes) in your career till now?

Sanjukta: Last year, in Sonitpur District, we had reduced the crime rate by 10 percent. In 2013, the number of cases registered was four thousand four hundred while in 2014 it came down to four thousand. That means we have been able to curb four hundred cases and that, I believe, is a major achievement in itself. And most of the cases that have come down are those of robbery, theft and a few crimes against women as well.

Fried Eye: Being a woman, have you ever faced any discomfort in running the office you are the incumbent of?

Sanjukta: See this is Assam and I personally feel that there aren’t any gender based issues here. In my career till now I have known two lady officers after me, one from Punjab and another from Mumbai, who had been posted in Assam and even they didn’t face any problem here. So I guess gender is not an issue in our state. All you have to do is prove that you are a capable officer.

Fried Eye: When did you decide that you wanted to become a police officer?

Sanjukta: To be honest, I never decided that I wanted to be a police officer. I sat for the UPSC, I got the IPS, I joined the academy and then once I started working, I found my job very satisfying because you get to help people.

Fried Eye: Were you this ‘rough and tough’ as a young girl as well?

Sanjukta: I don’t know what your definition of ‘rough and tough’ is but I have a kid and I doubt if he would agree to me being even rough, let alone tough. See, people play different roles at different points of time. As a kid I was interested in sports and studies, I did well in all my exams and, well, I am here today.

Fried Eye: If not an IPS officer, what would have you liked to become?

Sanjukta: I would have become a University teacher or something similar to that.

Fried Eye: What is that one thing in your life which you wish would have been different?

Sanjukta: Nothing! I have no regrets in my life. In fact it’s silly to keep wishing for things to have been different because if you are doing that, it essentially means you are looking back and if you waste your time looking back, you will be stuck in your past and never be able to move ahead of it.

Fried Eye: If you were to have a super power, what would that be?

Sanjukta: I would have loved to be ‘Swamp Thing’. It’s a fictional humanoid character found in DC comics. The monstrous Swamp Thing can control every iota of plant life on this planet, from the fungus on stale bread to forests of towering oaks. Superhumanly strong and grotesque, the Swamp Thing protects both humanity and the environment—usually from each other. It’s really cool.

Fried Eye: Who is your role model?

Sanjukta: My mother, because she has that tenacity and determination which I don’t see in many people.

Fried Eye: Is there a message you would like to give out to the women on the occasion of Women’s Day?

Sanjukta: There are two things that not only women but also man should keep in mind whenever you are asked to do anything. First, are you comfortable doing it? Second, are you having fun doing it? Even if it is work or even if it is, say, walking in knee deep water for ten kilometres, if you are comfortable doing it and having fun, you should go ahead unhesitatingly but if you are not, you should walk out of it immediately. And then, for women specifically, I would just like to say that if you are being harassed or hurt by anybody, turn around and give it back to them; it puts an end to it right then and there. You need to live independently and more importantly, think independently! The Unpopular take: Every Indian Must Watch India’s Daughter

Thank God for the ban