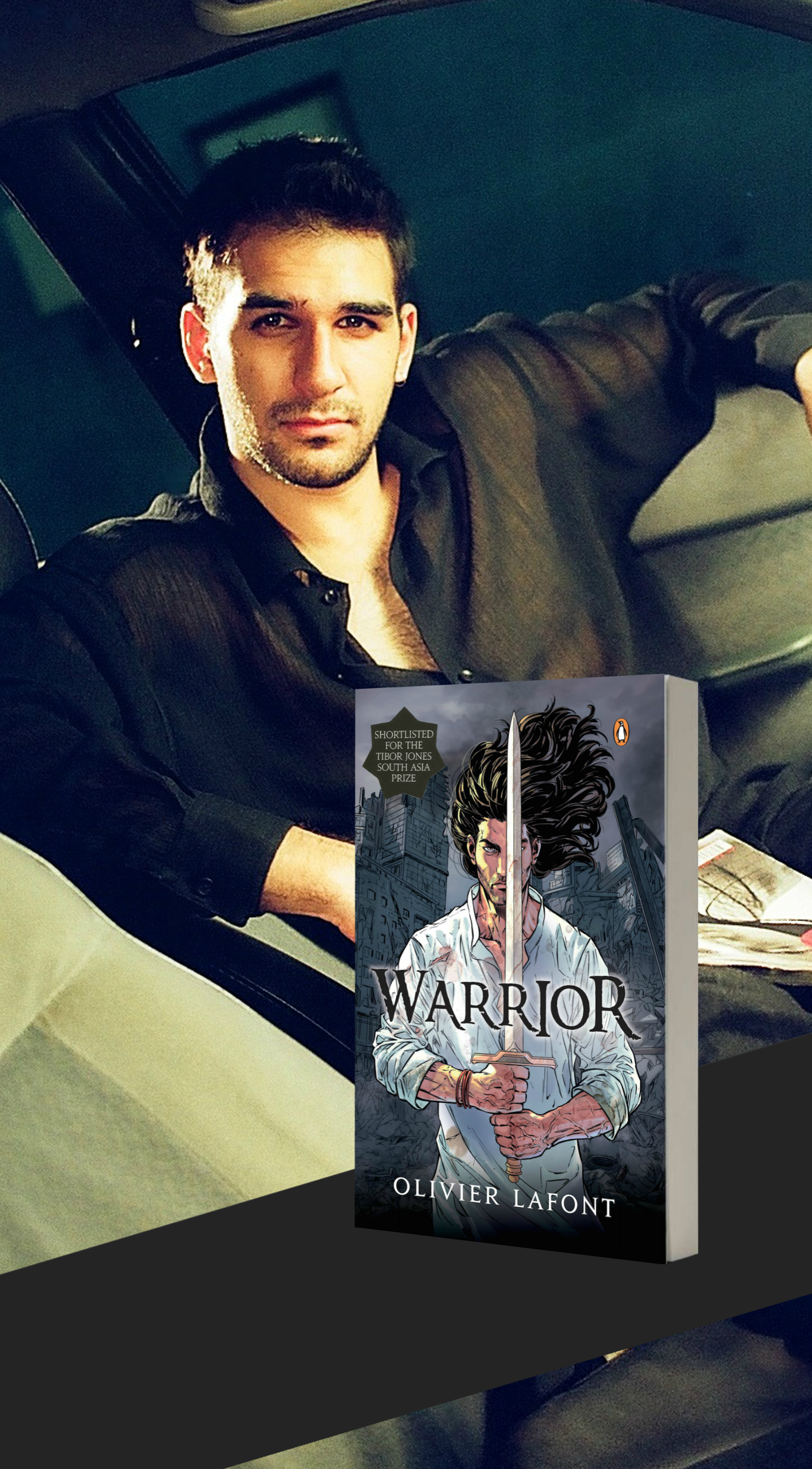 How many authors can claim to have both the looks and the acting chops to play the hero in a movie based on their own book if they chose to? Olivier Lafont can.  A movie on Lafont’s  Warrior is the most natural thing, given the sheer visuality of its adrenaline shot narrative . And Olivier himself would be a perfect fit for Saam, the watch mender demigod who’s forced to take on his own father, a wrathful Shiva, to save mankind.

We’ve seen Olivier in scores of Ads. We’ve loved his turn as Suhas Tandon in 3 Idiots. And now we get to experience him in his spanking new avatar as an author. Fried Eye had him on the hot seat and got him to spill the beans on his ‘firangness’, his exceptional family and why India has him hooked.

FE: Why would an actor- model- screenplay writer, somebody comfortably ensconced in Bollywood glam, want to spend hours writing a book?

OL: Writing a book is one of the least tedious things in the world for me! Actually I was passionate about reading and writing from a young age. Writing and creating worlds and characters is extremely interesting and lots of fun, I can literally spend weeks in private engrossed in writing.

FE: Tell us about ‘ Warrior’. You made it to the shortlist of the Tibor Jones South Asia Prize…

OL: ‘Warrior’ is an epic adventure story, a fast-paced drama about a divine father and his estranged demigod son on a collision course. The father is, of course, Shiva, and the son is Saam, son of the Destroyer. The story takes place in modern day India over the three day cataclysmic process that destroys the universe. Saam has to stop Shiva from destroying everything, but has an intense and bloody history with his father. It’s always a good feeling to have your work recognised. At the end of the day, however, it’s all about the readers and how much they enjoy the book.

FE: An author -historian for a dad, a professional boxer for a granddad! Tell us about your fascinating family.

OL: My father is a historian who specialised in colonialism in the Indian subcontinent, and specifically the Europeans in India. He and my mother, who is of Punjabi origin, were in Delhi for about 25 years, they moved back to France a few years ago. So I am technically of mixed heritage, but I grew up French. When my family initially moved from France to Delhi I was exposed to American culture at school and Indian culture generally, so I also grew up with these influences as well. I have two brothers, one is a professor of mathematics and the other is a video game designer. Most of my family is now in France, but I’ve been in India so long I feel very Indian myself.

FE: After you graduated from the US, you could have settled pretty much anywhere. Why India? Was it (angling for a bit of spice here) love? ☺

OL: Love for India, without a doubt! I was looking at the Indian film industry at that time and thought that it was going to evolve very rapidly. I felt there were going to be some exciting developments in cinema here, so that made sense professionally. I also felt most comfortable in India, and my family was mostly still there, so it felt nice personally. FE: How ‘firangi’ does Bollywood make you feel? Does it give you leverage or is the tag cumbersome?

OL: The weird thing is that I don’t consider myself firangi at all, although I’m not sure how I’m viewed. I’m aware that female foreigners are making it in a big way, like Katrina Kaif, Jacqueline Fernandez, Nargis Fakhri, Sunny Leone, but I can’t recall too many foreign males getting substantial roles, so maybe that tag for men is cumbersome.

FE: Can we expect something marvellous from you in the coming months, film and literature-wise?

OL: Right now I’m focussed on ‘Warrior’ and should be for some time. There’s a film script I’ve just written, however, for which I’m looking for a producer. It’s a really fun comedy, and it’s the first script I’ve written for myself as the main character. What’s really interesting about this film is it could be an Indian film or an international one, so the producer could also be Indian or international.

If we could take you back in time, where would you like to go?

Seeing the Earth from space

Now, tell us a secret.

I once wrote a romance novel just for my wife.