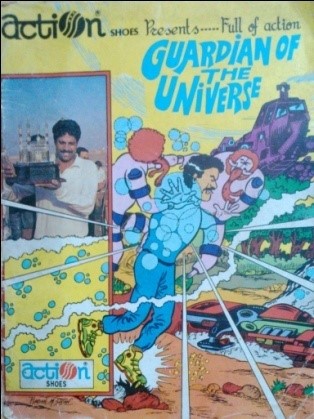 Sometime in the 1990s, a light bulb glowed and burst over the heads of advertisers- what if ads were targeted towards children? What could the consumer do if their child truly wants something- buy it or see them turn blue as they held their breath? All sorts of products from Dalda to hair shampoo used child actors in their television commercials. When Indian comic books with desi superheroes entered the market, advertising companies decided to use the medium for product promotion. Kapil Dev played himself in a one-off comic book Guardian of the Universe published by Action Shoes. Very much like Guardians of the Galaxy, only with better shoes and… bubbles. Lots of bubbles.

God knows why Action Shoes stopped with only one issue. Gaze on this opening page of the comic book and tell me if Kapil’s freakish 3D left fist gorilla punching the halo out of a dude doesn’t make you feel all sorts of inadequate. Kapil Dev- Renowned batsman and bowler and the love child of Mr. Fantastic and The Hulk.

Let us  give you a guided tour of the book and explain why we consider it the epitome of the Indian superheroe comic-book.

The story begins with Kapil being a regular sportsperson, running his ’10 kilometre non-stop jog’ basically being as uninteresting as possible. He chances upon a spot where he hears strange sounds coming from the bushes… What does the fox say… ghirrrrrrrrr

… and stops to investigate. He sees a giant multi-coloured space vehicle sitting in a sea of foam. As he watches, strange boar-elephant- Jamaican hybrids emerge from the ship in a glow of Venn diagrams… …And a splat of green fluid

…clear up traces of their mission and strike Kapil unconscious. Please bear this in mind as it will come in handy later.  When Kapil wakes up, he is understandably groggy and clueless about what struck him. The dizziness is shown through the usual stars and circles and also… you guessed right… Venn diagrams. where am I? who am I?- typical Bollywood existentialism. And why does my knee look like a peanut?

But let’s leave Kapil here for a moment and travel with the aliens.

The spaceship returns to its home planet, Action Planet (genius!) where the reigning monarch is another boar-elephant hybrid. But how do you know that he is the king? Does he wear a crown? Or carry a scepter? Or does a diamond grow out of his head? Did you say a diamond? Well then, you are absolutely right. King of Action planet by day… a little princess at night ‘Sir, we have nabbed the barefoot bandit.’ ‘That’s wonderful… but where are his shoes?’

Anyway, the king being a wise king knows his priorities. He orders his ablest scientist Dr. Atlanta to look for the missing shoes! Yes, that’s right. For a while the director of an inter-galactic police force dismisses rampant drug abuse on Earth as a mere trifle and asks the planet’s Stephen Hawking to help locate a pair of Action shoes. For all budding advertisers out there, let this be a lesson- seek a serious world problem to bring your product into focus, then let it fade into the background because obviously your product comes first.

With the help of a complex mathematical equation… …Dr. Atlanta finds that the shoes are now in the possession of Kapil Dev. That’s a revelation! Kapil Dev, captain of the team that won India its first Cricket World Cup and a celebrated athlete was so poor that he scavenged for discarded shoes on the street. So that’s how a nation treats its best sportspersons! God!

So the king looks up what seems to be the planet’s version of Wikipedia for the personal details of Kapil Dev and decides that he is a man who can be the next Green Lante… sorry, Action Man. And when I say personal details, I mean personal details with a capital ‘creepy’. Kukku drinks milk and eats saag and wears Action shoes when he beats a thug… but that comes later.

So they contact him through his television feed and scare the beejesus out of him. What follows next is a creepy interaction but we will save that for later. Let’s say that the king manages to ‘convince’ Kapil Dev to turn into an action (wink wink) superhero and gives him powers. Like the Hulk, the transformation from man to super-freak is quite painful. By the power of… The twist in the tale is that Kapil doesn’t have to transform to use his powers. Like Dorothy, the powers were in the shoes all along. We would like to believe that in an alternate universe where the comics series was not discontinued after the first issue, the man and his shoes went on to have many more wacky adventures before hanging up their boots and walking into the sunset. Remember what we said… since his power lies in his shoes, Kapil has to contort his body in interesting ways use them. Here’s Kapil dismantling a ship with his shoes or his crotch: The shoes electrocute everything in their vicinity… even the wearer And making a gun break wind

So Kapil kills the bad guys, makes India drug-free and that’s where the comic book ends. However, there is one more thing.

One thing which comic books like Guardians of the Galaxy, Marvel Avengers and the Justice League do not address is the amount of paperwork, research and soft skills involved in keeping a group together. Like all other teams, superhero collectives are also in the wider sense of the term collectives. And only a well-oiled bureaucracy helps keep individual members in place. However, Guardian of the Universe is not built on compromise. We have already mentioned the chain of command on Action planet. Kapil sees only one spaceship but where are the others? They were ‘pursuing’ a ‘fact-finding mission’ all over the earth, idiot! So the efficient inter-galactic scouts also conduct inter-galactic censuses. Doesn’t that make you feel grateful kids: that there is someone in the heavens looking out for you?

But Gods can be vengeful too and in this case, downright creepy. We mentioned earlier that the King of Action planet communicates with Kapil via his TV. This is what happens. I am your ‘friend’… and I love your skin. ‘…Okay… see you soon. And nothing happened here, right?’

In a classic case of ‘I didn’t force him to do it, your honour, he did it himself’, the king makes Kapil change the TV channel to Channel no. 5 which in turn gives him directions to an abandoned fort where a mysterious hooded figure (not Tamraj Kilvish at all) gives him further instructions. It is hence proved that not only are superheroes bound in red-tape, ‘We look forward to more life-endangering collaborations in the near future. Yours sincerely etc.’

they are also subject to the ‘ask there, no you are at the wrong counter, go there, this is the accounts section: go back to the first counter’ government office routine. After Kapil has risked his life and taken on a large scale drug racket singlehandedly, anti-Kilvish gives him this very very official message.

Unfortunately Kapil Dev retired from cricket, the gods of Action planet realized that he was no longer viable for a second book in the Guardian of the Universe series and the madness stopped.

Isa Khati teaches sociology at a Delhi college and loves all cats without discrimination. Shalim M Hussain teaches the above mentioned cats English.