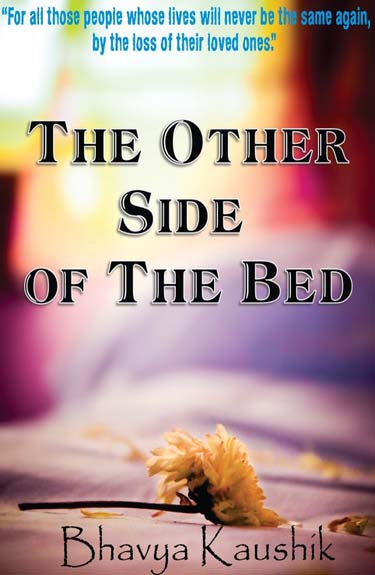 “The Other Side of the Bed” – When I first read the name of the book I thought it to be the story of a person who has lost his better half. Death, I didn’t think it was. I thought it was more of heartbreak in a relationship, the one that leaves you shattered and lonely as you look at the now-empty other side of the bed. As I went through the first few pages, I realized I was wrong; it was death, something that makes you hollow and hopeless from within, for you know the other person will never come back and you will never be the same again.

As I went through a few more pages of the book, I realized it is not just about crying for a dear one you have lost. It’s much more than that. It is about finding hope and learning to be happy even when there is no reason to smile. It’s about holding on to that only piece of floating wood when your ship has sunk in an endless ocean. It’s about trying to keep oneself afloat in the whirlpool of sorrows. It’s not about forgetting but about accepting your loss.

I went through a few more pages of the book; by now I was hooked on to it and I was always imagining what is going to be next. And then I realized the book is not only about moving on; it’s also about the nine synchronized bomb blasts that took within fifteen minutes in the city of Jaipur in the year 2008. Hundreds of innocent lives were either lost or injured that day leaving behind homeless children, grieving parents and despair.

One of my favorite quotations from the novel – “When a husband loses his wife, they call him a widower. When a wife loses her husband, they call her a widow. And when somebody’s parents die, they call them an orphan. But there is no name for a parent, a grieving mother, or a devastated father who have lost their child. Because the pain behind the loss is so immeasurable and unbearable, that it cannot be described in a single word. It just cannot be described.”

The story begins with Nakul who recently lost his wife, after literally a lifetime of togetherness, due to the bomb blasts that took place. Broken and forlorn, he lives a dead life for a month until he meets Devyani who has a story sadder than his. She apart from losing her mother in those blasts and her father, of whom she remembers nothing, in her early childhood, had also lost her brother in an accident in which she was blamed to be the murderer.

Together the “grief-mates” take up a journey to help each other in living a normal life and, as it turned out later, to help sixteen other lives invigorating hope within them and in the end gifting the society with a unique book leaving behind an indirect social message about the morbid effects of terrorism.

A few hundred words can never do justice to the amazing journey I went through reading this book written by Bhavya Kaushik. One has to read it to find out the various emotions it contains and the messages it imprints on the reader’s mind. Neglecting the few grammatical errors it contains, this book promises to be a wonderful read containing everything a mature reader looks for. From a perky love story to a dark pit of grief and sorrow to a promising bright future, the writer brings forth every side of the story quite well. For me, it’s a must-read.