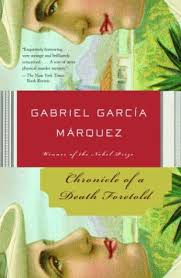 Call it a sheer coincidence or what but this is the second book that I am reading which starts  with a murder and goes in a haphazard timeline and has won the Nobel Prize. The first book I  was referring to is My Name is Red by Orhan Pamuk and the second one is Chronicle of a  Death Foretold by Gabriel Garcia Marquez.

On the day of the death, there is a kind of festive mood in the town as the bishop is arriving at  the town and there was a marriage the day before. However on the wedding day itself,  Bayardo San Roman discovered that his wife Angela Vicario is no virgin and returns her back  to her family. Her humiliated mother beats her savagely and demands to know her violator. After the name was being revealed she summons Angela’s two twin brothers Pablo Vicario and Pedro Vicario to defend the family’s honor.

The twin brothers who were butchers by profession although went with all rage with their sharpest tools to kill Santiago Nasar, but they were very reluctant in that. They tried everything to avoid this killing. The twins told about their motive to everyone they met and even prolonged the timing to kill by waiting till the bishop returns. By the time Santiago Nasar was killed the whole town knew about the murder that is going to happen but no one did anything to stop this. Some thought that it was a joke as they thought the twins were drunk. Some actually wanted the killing to happen. Some thought it was the right thing to do. Some thought the news has already arrived Santiago Nasar. Only his friend Cristoya Bedoya went looking for him when the news reached him. However, by the time he found Santiago Nasar, he was already dead. The twins had killed him with much reluctance however there was so sign of penance during the three years of imprisonment they served.

While the story was primarily about the murder, it also has a love story. The love story of Angela Vicario and Bayardo San Roman. Bayardo San Roman who was rich and handsome man came to the town looking for a woman to marry. He was well dressed, skilled in many arts and had lots of money. However, when the marriage proposal came to Angela Vicario’s family, she was reluctant marrying him since they did not have any love affair, but due to family pressures she said yes to it. She was feeling guilty about her not being virgin but the old wives convinced her not to tell it to anyone. It was only after Bayardo San Roman left her, she fell in love with the man. So when he left the town, she wrote a letter to him every day. However, Bayardo San Roman never replied to the letters. After 17 years, Bayardo San Roman returns to the town with all the letters which were never opened and neatly packed in a trunk.

It is based on a true story, however the story has more stylistic elements than fiction. The book starts with the murder and ends with the murder, and throughout the book the event is being repeated again and again. The narrator tries to find out how the murder happened and why and every character tells their version of the story, the story is reconstructed using interviews and investigations and told in a journalistic style. However, there is no clear picture about what happened and why until the end. The story ends with how the killing was conducted but does not tell if Santiago Nasar was guilty of what he was punished for or not, a fact that only Angela Vicario knew. Although, Santiago Nasar was a womanizer, it was still not clear whether he was the actual perpetrator. At the end, you simply wonder if Santiago Nasar was falsely victimized.

The story is interestingly written with great characterization. However, it becomes very slow at times. A quick read, however the book is such that it makes you re-read it for the fear of missing some part of the story that you might have overlooked.