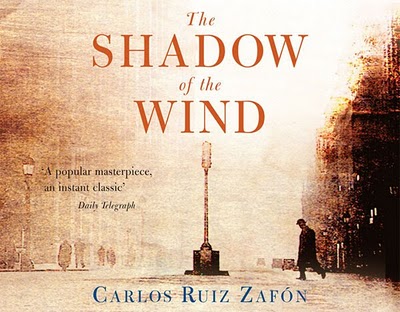 How far do you think a book can impact you? I am sure every ardent book lover has asked themselves this question at least once. I know I have! There have been books which definitely had the power to change my perspective of things; just as there had been books which made me think of nothing else at the time. But to actually find a book which talks about just this is an entirely different experience. Shadow of the Wind does just that!

It was intrigue which made me pick up this book from the topmost shelf of the library. Frankly, I had not heard of Carlos Ruiz Zafon before Shadow of the Wind. Zafon starts off on a slightly mysterious note as he talks about an 11 year old boy, Daniel, taking a trip to a very “obviously fictitious” library (kind of) with his father. Unlike many works of fiction, the tone makes you know that this is what the book is all about. (Well, the tone and the obvious fact that “Cemetery of Forgotten Books” is actually mentioned!) But this does not deter you from delving further into the protagonist’s life, which actually is changed drastically (an understatement) post the unconventional trip. Daniel picks up a book “Shadow of the Wind”, which does not at all seem unusual at first glance, but which gradually impacts (rather directs) every action of his. Daniel becomes captivated by

the book’s story and narration and seeks out more works by the author of Shadow of the Wind. He fails to find any more read, instead, finds himself dragged into a labyrinth of secrets and shadows in everyday life. And at times walks a very thin line between fiction and reality. As the book finally concludes, mostly on a predictable note, it makes you think back at what you just read; it will amaze you that the entire work revolves around the impact a single book had on a young boy of 11!

Leaving aside the predictability quotient of the book (which actually becomes apparent once you are more than halfway into the book), Zafon has succeeded in making a captivating read by merely through simplicity – be it the language, the characters or the plot. The characters, even though each has their own back story, never become larger than the book – this is what makes it endearing. The read in itself will take you in a captivating journey with each of the characters and you will witness the moment with them; and as you end the read, what remains with you is this journey and not any character. As for the storyline, well, Zafon has successfully mixed simplicity with unconventional which keeps you asking – why, how! He just put the concept of Occam’s Razor to a very subtle use!

Even though Shadow of the Wind is a translation from its Spanish original, it does not lose its touch of originality and makes you live in the streets of post war Barcelona. I have tried not to delve too much into the story as I would recommend you read it for yourself. If you like an unconventional read, this definitely is a brilliant pick. I am sure it will make you think!

About the writer: Madhusmita is a Business Process Consultant with a leading IT firm; She enjoys a good read as much as a sunny day by the beach. Raised in the town of Barpeta, she is currently based out of London.