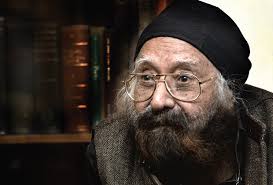 “Here lies one who spared neither man nor God
Waste not your tears on him, he was a sod
Writing nasty things he regarded as great fun
Thank the Lord he is dead, this son of a gun.”

On 20th of March’2014, Khushwant Singh met with sudden death. Although, he was 99 at the time of his death but no one expected his death. His fans including myself would wait each year for a new book he would write. He will be alive among us with his books but there will be a void created by non-availability of his new books. I was introduced to this man through his Joke Book when I was a child of 9 or 10 and, perhaps he was the one who introduced us with the sardar jokes. Later on as I grew up, I read many of his books like Train to Pakistan, Delhi, Sunset Club, Absolute Khushwant, The Freethinker’s Payer Book etc. and saw his versatility. I am still to read many of his books but I believe that he used to love poetry very much and it was evident in most of his books I read. Most of his books had a character Singh which was based on Khushwant Singh’s fantasy world. He really liked to self-deprecate himself in his writings.

During his life, he was a controversial man as his fans were in love with his books but on the other hand due to the views and opinions over his support to the Congress, his blind support to Indira Gandhi and Sanjay Gandhi he was always condemned by a section of people. Even recently he wrote about Indira Gandhi in his column “With malice towards one and all” condemning all Nehru- Gandhi family except Sanjay Gandhi and Rahul Gandhi. He even went ahead and said that Manmohan Singh is the best prime minister till date.

May his soul rest in peace.