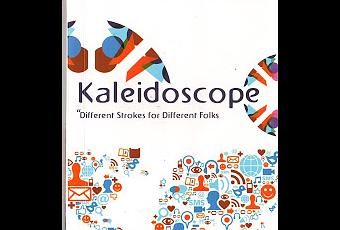 Springtide, an online English youth magazine in association with Parlance Publishers, organized a contest inviting Indian writers to submit their short stories on any specific genre. The contest went on for the entire month of April’13 and more than 1150 entries were received to be judged by Ashwin Sanghi, one of the country’s bestselling conspiracy fiction writers. The results were announced by the second week of May declaring the top 25 writers whose stories were later published in the anthology “Kaleidoscope: Different Strokes for Different Folks”.

The anthology begins with ‘The Hunter’, a short-story written by Dr. Vivek Banerjee, the winner of the contest mentioned above. The writing is flawless and the story is cleverly written, first indicating a different end for the characters while giving the story a contrary end, an unexpected twist. Other factors that make the story the best are the well-justified conversation between the central characters of the story, the thoughts of the protagonist, i.e., the hunter arising aptly at situations, the flow of the story and the good narration that keeps the reader glued to the pages.

Next, in the anthology, comes Deboshree Bhattacharjee’s ‘The House’. Although the beginning of the story is appealing, a raring reader might lose his reasons of reading the story in the middle, but only to get to the beautiful yet tragic ending which makes the read worthwhile. The story somehow reminded me of the short stories our English textbooks contained delivering a message in the end.

Tale of the Knitting Yarn is a sad story written by Nabanita Dhar about an optimist and perseverant Shreya who waits patiently for her husband Ashish to return from the war he had been fighting for the country. No, he doesn’t die fighting the war as a reader might expect in such scenarios. But the ironic end to the story surely makes the reader sigh at the way fate acts.

Renuka Vishwanathan’s ‘Voice Male’ is a “love” (notice the quotes) story which is totally out of the box with an end that one might not expect even in his wildest of dreams. It indeed leaves the reader uttering “gee” for the protagonist.

‘The Domino Effect’ by Deepa Duraisamy is a story involving various characters and incidences weaved by the fact that one action leads to another and that the consequences of a impish school-going girl not helping a blind woman on the road might be as huge as averting a major catastrophe in just four hours.

Then there comes the spooky story, ‘The Hike to the Temple’ by Prasanna Rao where a small group of archaeologists visit a haunted temple as part of their research. The factor that made this story be in the top 25 is the way the story unfurls and the reader’s lips form a giant ‘O’ as the ending is revealed. One might even read the story twice just to confirm the fact that he couldn’t guess the ending in spite of reading each sentence minutely.

Vaibhav Mukim’s ‘Food’ is a science fiction divided into seven scenes and while all readers may not comprehend it clearly, the writer deserves a pat on the back for presenting the story in a unique manner and for his capability of imagination and the different outlook given to death and immortality.

‘Happy Puppet’ is a story very beautifully written by Bhavya Kaushik. With a nice flow, the story manages to make drops of tear trickle down from the eyes of the reader. Unlike the name, it begins on a sad note and ends with a sadder one.

Garima Nowal’s ‘The White Dress’ is a wonderful story of a girl who considered herself unlucky for various reasons. The story seems to be a simple fairy-tale at the beginning but the way the entire story takes a different turn just by adding that one last sentence in the end is where all the beauty of writing lies.

‘Redemption’ by Harihar Adarsh is an amazing story that takes you to the ancient times where kings ruled and magic existed. A story well-weaved, it leaves the message that it isn’t any king or immortality or power, but love which conquers all.

‘The Last Date’ by Sarvana Kumar Murugan revolves around a couple who faces the anger of a person whose love was unrequited, in the worst form humanely possible. The theme and concept of the story is commendable but a more fluent narration would have made the story much better altogether.

Khushi Gupta, a minor, writes ‘I Love You Too’ in a much more sensible way than expected from writers of her age. A feel-good story leaving a message to all those who fear to speak up their heart, it also leaves a smile on the reader’s face.

Nehali Lalwani’s ‘Alive Inside’ gives that eerie feeling while reading the story that you know something isn’t right but you don’t know what. Nevertheless, it ends on a good note no matter how scary.

‘Theory of Evolution’ by Balaganesh Pitchai, an intelligently devised and well written story, gives a whole new point of view to look at the planet Earth and its dwellers.

‘’I’ Operated’ is the description of an operation keeping the patient, a sixteen-year old girl as the narrator, composed poignantly by Smriti Mahale.

Parul Tyagi’s ‘The Star that Shines on me’ is a mind-blowing story of a Muslim woman abandoned by her husband to live with her four children. Sometimes there is more than what meets the eye. In the same way, the protagonist has more courage and secrets than what we expect from a poverty-stricken burqa-clad conservative woman.

Anurag Bhatt’s ‘The boy who sold books’ is an inspirational story and reminds us of the importance of education and how few children do not get the privilege of going to school.

‘Chaos’ by Rahul Biswas is again another gem in this collection. A wonderful story about terrorism, bomb blasts and a police inspector, it will remind you of all those Bollywood movies about patriotism (or rather the opposite) that contain a lot of action and twists. The climax surely makes you say “wow” as you flip through the pages.

‘Secret of the Murderous Woods’ by Sanhita Baruah (that’s me) is a story involving two friends, a murder and a secret. You can send your feedbacks at sanhitabaruah@gmail.com

Aman Mathur writes ‘First Contact’ based on a futuristic view of the Universe in the year 2213. It is a brilliantly ex cogitated story involving a whole new idea of extraterrestrials and an ending with the human protagonist quoting an ironic phrase.

Shishir Dhingra’s ‘The Journey of my Life’ is a simple love story written in a beautiful way, not the author’s best work though. Yet, the impact of this piece of work remains as the conversation and the way the boy proposes his feelings is fascinating.

‘The Unknown Destination’ by Aniruddh Naik takes you from an e-mail at the present age to the medieval ages when Chandragupta Maurya had ruled and then leaves you pondering about curses, prophecies, secret societies and tantra.

‘Crazy Scarf’ is a sweet story written by ‘Prabhat Singh’ about love at first sight but from a different perspective and the protagonist here is a little one (literally) and one has to read it to find out more.

This diverse collection of 25 stories ends with Ayush Agarwal’s story of love that can drive you mad titled ‘When Love Oozed Out Blood’ with three main characters in a love-triangle but not necessarily the way one expects. The vicious scene in the beginning of this story is the show-stealer. The ending is sad and it leaves a message for our society indicating that a change is required in our thinking.

As a whole, this anthology of 250 pages proves to be a nice read for those who love to read stories of various genres. All the stories are good, albeit some are better than the others but none leaves you uninterested.