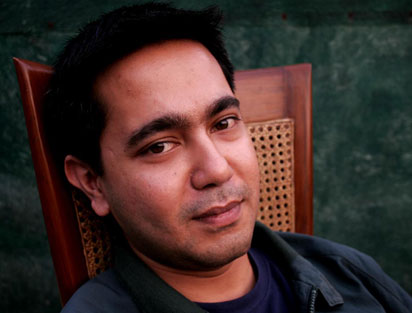 Born in Tezpur , Assam in 1975 , Ankush Saikia is the author of three books – two novels and one short story collection. He was shortlisted for the fourth Outlook/Picador-India non-fiction writing award (2005) and has worked as senior Editor in journalism and publishing. As a part of upcoming FE Lit month which focuses on North East literature , we had a talk with Ankush –

Your first book Spotting Veron and other stories was a collection of short stories which mostly revolved around Shillong and parts of Assam.  Although short story collections are finding an audience nowadays but short stories are not a favorite with publishers. What made you to start with an anthology of short stories?
Spotting Veron and Other Stories was actually my second book. Jet City Woman was my first book. I had a two-book contract with Rupa & Co., and so after the first novel I sent them the stories I had worked on till then.

You have seen different sides of Shillong. How the non-Khasis think and how the Khasis think- From extreme thoughts to moderate ones in both sides. How do you think that helped in writing the short stories in your first book?
If you have an experience of how a wide range of people behave and speak, and if you are familiar with the beliefs they have, then it helps while writing stories because of the depth it can give your writing. 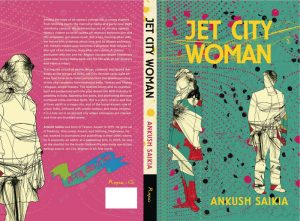 Jet City Woman, it seems to be your favorite song. Your debut novel (link) is titled Jet City Woman and you have also written a short story with the same title.  Is there a story behind that?
The short story had appeared on tehelka.com many, many years ago, and it then turned into the novel. Jet City Woman is by Queensryche, a band I used to listen to quite a lot at one point of time. When I had finished writing the story, and was trying to think of a title for it, I heard that song on FM radio one evening (I was in Delhi then, staying with roommates), and so I used the song title for my story!

In your second novel, The Girl from Nongrim Hills (link), you seem to have grown as an author. The Girl from Nongrim Hills had a very vivid description of events and a reader could actually relate to it and  see it happening in front of their eyes. What do you think have helped this growth in  the second?
Yes, it is a much better book than my first two books, being technically sharper and less self-indulgent. I think what helped was the constant practice of writing, working with a very good editor (Chiki Sarkar at Penguin India), and writing about a place that I knew well.

The Girl from Nongrim Hills is a novel in noir genre. A genre very few dare to get into as the readers of noir are very demanding. How did you develop the story and how much work went into making it perfect?
I actually wrote it as a longish short story or a novella for my own entertainment, to see if I could come up with a noir story set in Shillong. That ultimately developed into the novel. It started with the idea of money changing hands in a hotel room, and then I had the idea of a guitarist in a local band driving around the city. And then once I got the Girl into my head, things started moving from there. From the novella to the final manuscript it took six drafts in all working with Chiki Sarkar on the various aspects of the story.

The Girl from Nongrim Hills  is a perfect novel for a movie. Anything happening on that front?
A Mumbai-based producer who was associated with the movie The Lunchbox has just optioned the novel, so let’s see what happens next!

Tell us about your upcoming novel, Red River, Blue Hills
It’s a thriller set in Delhi and North-East India, and will be published by Westland in early 2015. The book is about how violence impacts the lives of people in a lasting way.

Of late, a term called Northeast Literature has cropped up in the Indian literary scene. What are advantages and disadvantages of this trend?
It can give a writer some visibility, but at the same time it might tend to slot a writer into a box.

Any other book that you are currently working on?
Yes, I’m working on the edits of my third novel, a very dark crime novel set in Delhi and featuring a private investigator. It will be published by Penguin Random House India sometime in the middle of 2015. Also, I just finished this article recently:
http://www.tehelka.com/smoked-out-by-a-green-diktat/

One thought on “The term Northeast Literature might slot the authors: Ankush Saikia”