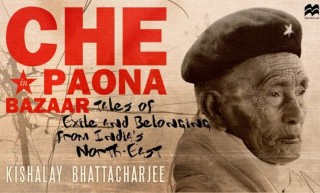 Book Blurb : North-East India is not an ‘imagined community’, separated from the politics and policies that govern the rest of the country. It is as real as the violence that has torn the land apart, leaving its people grappling for a semblance of normalcy, if nothing else. The north-east isn’t just a hotbed for insurgency and deadly casual encounters, a stop-over on every international rock band’s schedule, or where used syringes lie waiting in dark alleys. There are other realities as well— of forbidden love, weddings, fascinating cuisines, childhood memories and other ‘unimportant stories’ that never made it to our newspapers and television screens.  Years in the media have taught him that not all revolutions will be televised. Che in Paona Bazaar finds Bhattacharjee deep in the heart of Manipur, demystifying a state that was once just a source of ‘news’ for him. He delves into public memory, digging up collective histories to bring to life a people forgotten by their fellow-countrymen, of women hardened by constant hardship and of a youth struggling to merge their multiple identities.

Review : I took the longest possible time to finish this book , considering the fact that I loved it from page 1. When I started the book, All I had in mind was the term “seven sisters” , but it took me a while to name all seven of them without referring to Google . Ok, i am not really proud of this but well , this is all I knew of the states. I felt this book would  tell me a lot about the states – both good and bad. But this book surpassed all my hopes and expectations. This is an easy and engaging read if you let the words be nothing but words, and that is sometimes the difficult task in itself. Every once in a while I paused , expressed my disbelief on what I read , told it to my husband and still I could not make sense of what I actually felt. The rapes by armed forces , the frequent protests that people of some areas have adopted as part of life each day, the many national level athletes and players that dot Manipur , the remote villages where no one except some daring and persistent journos have set foot and so on. All this excitement was mixed in equal parts with shocking tales of the way of life in this corner. The author has incorporated a character Eshei( the word means music / song ) and through her journeys and feelings he has expressed the anguish , pain and how some find a path while others resign to the darkness. The folktales , the culture , the food of these lands is so rich and fascinating while living there is no heaven. Why we are bothered by the north eastern people coming to other states for work or settling while never asking why there are no such opportunities in their homeland ? I can still recall when the author states that even when masses want peace and progress , they are ruled by handful of people with personal agendas and there is nothing to change that any soon.   ‘Her ex-lover called up from Delhi-she was shopping and wanted to send Eshei something…. And suddenly I thought it is Republic Day, shops are closed. So how would she buy, but then I remembered that she is in Delhi. The place where R-Day is celebrated, not banned or mourned. In Manipur, we are forced to mourn on 26 January, 15 August and every time the prime minister or president or some high profile political leader visits….   There is so much to know and explore about this mystical part of the nation and I hope I get a chance to visit north east once in my lifetime. Till then , reading this book has set me on a path to explore and understand the agendas and the aftermaths of what these states have been subjected to. The life may not be any better or worse than some other area of the country but the our acceptance of a problem is what these states seek. I Absolutely loved Kishalay’s style of presenting his observations and tales that remained unreported by mainstream media so far. I wanted to know more about my country , the people and how we differ , for the first time. And I am happy I got a chance to read this book as the beginning of my quest A quest that might make me read more of Indian non fiction soon. If you have suggestions for me , please do leave the book names / Author reccos in comment section.

Book Review: I am Malala

The term Northeast Literature might slot the authors: Ankush Saikia