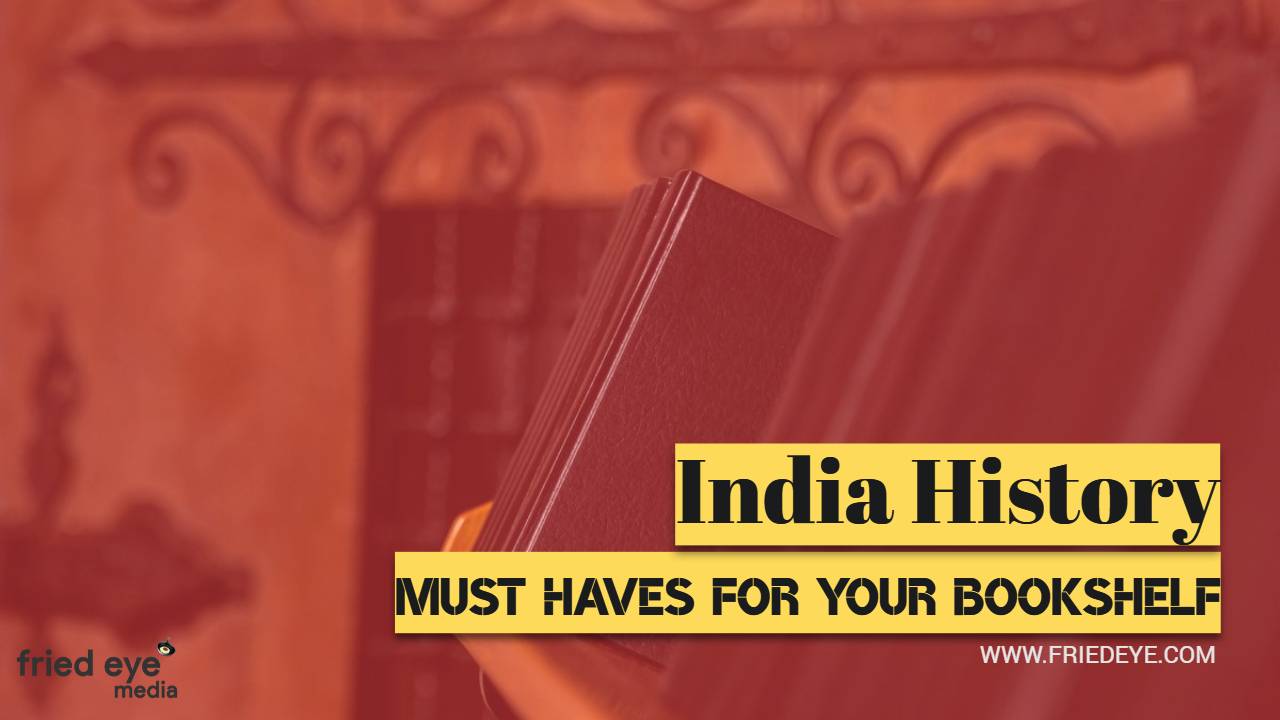 If you are a history nerd, Indian history is nothing short of a gold mine. But even if you are not, these are some books we trust could still get you hooked. We are not claiming these are the best books that have been published. That’s impossible to judge! But these could very get you going, apart from adding some serious glamour to your book shelve… or kindle!

Just to add, Indian history is a vast and diverse subject. It encompasses a wide variety of topics, from the history of the Indian subcontinent to the history of India as a whole. It is studied widely studied in universities around the world and discussed in detail by historians and scholars. We have tried to draw in a list that could provide you with a glimpse across the ages

“The Discovery of India” by Jawaharlal Nehru

One of the most influential books on Indian history and politics, “The Discovery of India” is a classic book by Jawaharlal Nehru, who was the first Prime Minister of India. For many years, it has been the most widely read and quoted book on Indian history.

The Great Indian Mutiny was a major rebellion in India in 1857. This event led to the fall of the British East India Company and made it clear that Britain could no longer rule India from a distance.

“India: A History” by John Keay

“India: A History” is a chronological account of India from its prehistoric past to the present. Keay traces the rich tapestry of Indian history, from its origins as one of the world’s most ancient civilizations to its post-colonial emergence as a modern nation.

“1971: A Global History of The Creation of Bangladesh” by Srinath Raghavan

This is a book about the history of India, Pakistan and the Kashmir conflict. The book traces the story of partition and independence that led to the formation of Pakistan and India as two separate countries. It is a well-researched and detailed account of how these two countries came to exist as we know them today.

“India Unbound” is a book that explores the meaning of India’s rise and offers a new vision for its future. The author Gurcharan Das writes about how the economic reforms in 1991 have led to a rapid transformation in the country.

The Great Indian Middle Class by Pavan K. Varma is a book that seeks to understand the complexities of the changing times in India. The author does this by looking at the changing relationship between politics, power and people’s lives.

India After Gandhi by Ramachandra Guha

The history of India in the decade after independence is one of the most dramatic and consequential in modern world history. It includes the end of British rule; bloody partitions; a fratricidal war between Hindus and Muslims; economic and social upheaval; and (in 1948) at least 800,000 deaths from starvation.

“The Oxford History of India” by Smith Vincent

The Oxford Companion to Indian History is a one-volume reference work that provides a comprehensive and up-to-date coverage of India’s history from ancient times to the present. Edited by Percival Spear, this authoritative content is written by an international team of experts from India and abroad. This book has everything you need to know about Indian history in one place.

Freedom at Midnight by Larry Collins and Dominique Lapierre

Freedom at Midnight is the true story of the days leading up to, and after, India’s independence from Britain in 1947. The authors have done a great job of portraying both sides of the conflict with balance and depth.

The book focuses on the history of medieval India, from 1000 AD to 1707 AD. It covers the period from the Ghaznavid invasions to the decline of Mughal power.

The book is a result of a decade-long research and is a comprehensive study on medieval India. It also includes an account of various aspects such as religion, society, economy, and culture.

From Plassey To Partition: A History Of Modern India by Sekhar Bandyopadhyay

This book is a historical account of the modern Indian past. It is a study of the impact of colonial rule on India, and the consequences of partition.

The author has written this book in an easy-to-read manner, with enough detail on the history to make it interesting for both students and general readers. This book is divided into three parts: The first part deals with the British conquest of India; The second part deals with the rise and decline of Congress; The third part deals with Pakistan’s emergence as an independent nation-state.

This historical account begins at Plassey in 1757, when Bengal was conquered by Robert Clive, who became known as Clive of India. It then moves on to describe how British rule gradually extended over most parts of India, through conquest or by alliances.

In Search of the Cradle of Civilization by Georg Feuerstein, Subhash Kak, David Frawley

In Search of the Cradle of Civilization by Georg Feuerstein, Subhash Kak, David Frawley is a book that explores the geographic location of the original civilizations. The authors examine ancient texts and archaeological evidence in order to find out which ancient civilization was the first to arise.

The Ocean of Churn: How the Indian Ocean Shaped Human History by Sanjeev Sanyal

This book explores the political, economic, cultural, and religious forces that have shaped the Indian Ocean region over the course of history. The author argues that without understanding this area of the world, it is difficult to understand how human history unfolded.

South India Under the Cholas by Y. Subbarayalu

This book tells the story of south India from 300 CE to 1200 CE. The author explains how South India developed under the Chola Dynasty with an emphasis on the different regions of this subcontinent.

A History of Assam by Edward Albert Gait

Edward Albert Gait, a British subject, wrote this book in 1883 to convey “the beauty and the pride of Assam” to the wider world. He published it privately, but was encouraged by friends and acquaintances to release it for a wider audience. It was first published in London by Messrs. Thacker and Co., 1885, as a two-volume work.

The Age of Wrath: A History of the Delhi Sultanate by Abraham Eraly

The Age of Wrath is a masterpiece that traces the rise and fall of the Delhi Sultanate. Written by Abraham Eraly, this historical text has been hailed by many as the most readable of all books on India’s Muslim conquerors.

Did you like reading this? Guess what. It’s written by an AI Writer. If you wish for such copies on your blog too get Rytr. Click here for irresistible deals!

Must read graphic novels for adults