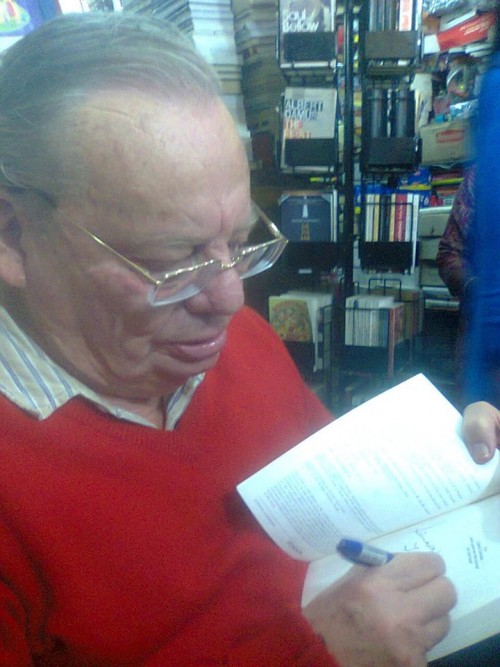 A miscellaneous date with Ruskin Bond 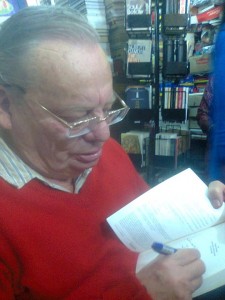 If someday I decide to write a book, I will title it – Small bundle, Big dreams. Why? The ‘why’ will go with the book if I ever come to that… but let’s get promptly to my point before I lose it again. Recently I had gone off for a vacation to Mussourie, which incidentally is a beautiful place to run away and hide if ever you feel like…there! I told you, I keep losing my point. So yes, Mussourie it was with a whole girlie gang. Ah! Wish it was a gang of friends, but no it was a family of femme fatales  (applicable to me) ranging from 6 to 60 years. Yes my niece was there with me along with her equally childish mother. Yes, the said little bundle…of joy?  Well ,we shall see how much joy it is when you are dreaming big.

Mussourie as you know is a famous hill station and more than that it is famous because you get the chance to meet and chat up with the legend called Ruskin Bond on Saturdays at a book store there.

I was lucky. It was a Saturday when we decided to hit the mall road. A random stroll with the ladies brought me face to face with a sign in a book stall! Jackpot!  The sign read- Ruskin Bond will be available from 4 to 6 pm today.

But there was a slight catch. Not ‘a’, rather many slight catches- For one – it was monsoons and it could rain any moment. Second the kid was tired. Thirdly there was still an hour to 4pm. Fifth, all the shopping, eating,  sight-seeing were done; which practically left nothing much to do till an hour , when suddenly I realised we hadn’t done Gunhill yet-The ropeway ride to Gun hill. I flung the “carrot” in front of the three exhausted and irritated women , which led straight to Gun Hill , a viewing spot.  At least an hour could be easily spent there, till zero hour.

But one look at the huge serpentine queue, and the kid let out a wail that she wanted to go back to the hotel. It led to quite a lot of debate, doubt and the degradation of having to calm and control the tantrums of the little bundle of joy in front of hundred odd strangers. I was almost about to abandon my one sided date

Ruskin Bond will have to wait. But at that moment it was the kid who was the foremost priority.

Somehow the sight of the descending cable car managed to calm her down. After waiting in the queue for another half hour we managed to reach Gun hill on what I would term as the ride in the clouds. I think Mussourie , Nainital are best visited in August. The rains are a practical hindrance, but again the rains and the rain clouds floating in and around you in the mountains are what you would call as an ‘out of the world’ experience.

But there was nothing much active happening over there in Gun hill that day. All the rain clouds and mist had hidden the views of the Himalayan peaks. So other than a cup of tea and a plate of pakoras we were done. I was all a picture of impatience with some furious calculations going on my mind. It was 5 pm then; would I be able to make it before six?  I glanced surreptitiously at the three bored ladies, but who were now somewhat rejuvenated. I prayed to God to give me a sign. Personally I so much wanted to meet him. Professionally I so much wanted to capture a feature on him… Anyways, descending down was much easier. It took just five minutes. It was drizzling slightly. I herded the ladies in our cab waiting at the mall road and bidding a hasty goodbye and a hastier explanation, I made a dash for the book store. I reached in a huff and a puff to find him already surrounded by starry eyed fans. I slithered in somehow to the center ( no wonder I am called a nagin)  and started observing. There was a reporter already interviewing him and people jostled to get their books autographed.

I could catch bits and pieces of the conversation he was having with the reporter –something about the education scene … If only I had hit the store at 4 pm itself I would have been the one sitting on that chair with him.

The best thing about him was that he was giving something, which even a boyfriend stops giving  to his ladylove after a time. Yes, he was spending quality time with each of his fans, if you can it call that.

Nearing 80 years of age, he didn’t look a year older than 60. Smiling and chatting, his eyes twinkled with enthusiasm at every compliment paid. He patiently posed for photographs, took care to get his spellings of the names right, politely answered all sort of queries, smiled with all humility at his fawning, gushing fans, a group to which I belonged shamelessly.

I was in no hurry to leave the shop unlike some of the customers who wanted to be back at their hotel before darkness set in. I enjoyed watching him, as he replied to a young man and an aspiring writer on how to get his first book published.

There was none of the patronizing attitude that is attributed to super successful authors as he explained to the author the trials of a first time writer ending with, “keep trying different publishers”.

A young lady chatted up next. She did have an enormous package of books, each addressed to a different beneficiary, but Mr. Bond was a complete charmer. He patiently not only got his spellings correct ,but also inquired about the little guys to whom the lady probably addressed them, small things yet ,that must have made her day- how old they were? If they read a lot? Etc etc. I waited patiently, all the while taking in everything about him.

Should I push my luck and attempt for a Fried Eye exclusive? My turn was just about to arrive. The sorry picture of the three ladies in a cab popped up. I shook my head and pushed it to the farthest corner of my mind screen.

A proud father clicked the photograph of his son with the maestro, which he gladly obliged.

Next was a group of students, probably from Chandigarh , and they had a hearty banter. One of them asked which among his works was closest to his heart. It was a hard question I guessed and my guess was correct. They discussed a little about his upcoming plans. A few photographs later, it was my turn.

All the questions that I was churning in my mind, simply vaporized…

I gave a hesitant smile. His smile was more confident.

I gushed about how it amazed me that he had written his first book at the tender age of seventeen and how in spite of wanting to be a writer, I was still unsure.

He smiled his affectionate smile.  Should I try my luck. I mentioned Fried Eye in between mentioning the names for the book.

He appeared interested…perhaps delighted too. He asked me more about it. I said it was an e zine and a fortnightly. He said the name was interesting and wished me good luck in my endeavors.

There were stars in my eyes. The crowd had thinned. There was still half an hour till 6. Maybe I could get my exclusive. I called out to the God of amnesia to make me shamelessly forget the suffering females. But God had other plans.

Just when I was about to make my request, which now that I look back and analyze, wouldn’t have been turned down I am sure, boomed the voice of Pandu hawaldar

‘Jinka gaari mall road me parked hain. Jaldi nikal lijiye nahin toh chalaan ho jayega! ( please take out your cars from the Mall Road or else you will be penalized)

The colour drained from my face.  The picture of Bond became fuzzy. M was surely in a spot. I hurriedly clicked a picture. Such a sad evening, I couldn’t even get myself clicked with him. But nothing makes one run like the threat of a penalty and an impending doom of become lighter by a few hundred rupees. Hrithik Roshan’s Krish act pales in front of what I did next in the narrow mall road as I turned and ran and twisted to and fro the surging crowd till I reached the car. Three pair, ok make that four pair of steely eyes greeted me as I stumbled inside the cab. Just in time! The cops were just marching in from the other end and Mr Bond’s M just escaped in the nick of time.

No interview, but I had some memories, a few autographed books, and a picture ! Interview –some other day. Happily I passed my niece the book The blue umbrella which was autographed for her. I showed her name signed by Ruskin Bond. She squealed in delight as I beamed. Too fast! Her next statement brought me crashing down to reality- Wow! Maasi ab mein bhi autograph autograph khelungi.