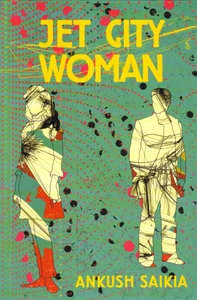 Recently, I read “Jet City Woman” by Ankush Saikia: a small novel that was a quick and fast read. The title of the story is inspired by “Jet City Woman” song by progressive metal band Queensrÿche and you can relate to the song with the story only, at the end. The story is told in first person by a young student (who later turns into a journalist) about a girl Sunaina aka Naina.

The book is divided into four chapters and the story starts well with a backward timeline narrative when the narrator goes to cover an art exhibition and starts thinking about how the events unfurled that day after filing the story. He met Naina in the exhibition who asked her to come with her as she wanted him to meet someone very interesting. It turned out to be a high quality cocaine dealer from Afghanistan by the name of Karim. However he does not know what to do and came out as fast as he can. In the second chapter, the narrator narrates how he met Naina in DU. The next two chapters are in forward timeline and unfurls the history of Naina and what makes her so mercurial and aloof among the crowd.

I really liked the honesty in the story and Ankush does not seem to be conventional about his story. Coming from a small town Shillong, he talks about how he felt it difficult to adjust in a city like Delhi, but after spending a couple of years he also got used to it and how it became a part of him. At times the story almost feels autobiographical (but of course there is no way to verify that) and the author makes it “relatable” to many, especially to people who grew up in the nineties.

Ankush seemed to struggle in parts of the book towards the middle and sort of drags but soon he catches up and the pace of the story takes up with a new twists and the reader could not stop till he ends. There are times when the reader feels like skipping as they simply didn’t need a mention in the story. As for example we are told why Majnu ka Tila is named so, although the story of that naming doesn’t seem to have any significance in the story.

At times I felt that the story will end in “and they lived happily ever after” but thankfully that did not happen although it was a happy ending to the story.

P.S. – I missed the cheeky and mean humor, for which Ankush Saikia is known for, in the book.

A miscellaneous date with Ruskin Bond