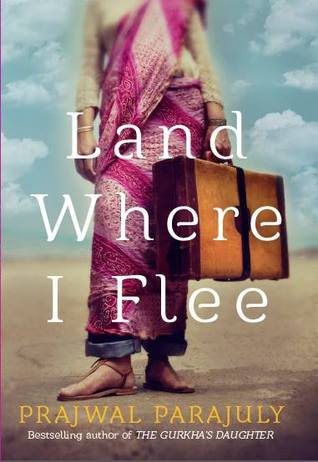 Quests, Identities And Secrets – Book Review of ‘Land Where I Flee’

Chitralekha Nepauney, a shrewd businesswoman, with formidable political clout in Sikkim, is approaching her 84th birthday. For Nepali Hindus the 84th birthday is auspicious and is commemorated by a ceremony called Chaurasi. So there are hectic activities going on at Chitralekha’s place. The occasion is perfect for a family reunion with all the grandchildren who have traveled from various corners of the world, with their stories, to attend the Chaurasi of the powerful matriarch. As the plot unfolds, the reader is gradually exposed to the insecurities, jealousies, prejudices and hidden aspects of the lives of the characters.

Each of the siblings has a unique story– Bhagwati, the eldest and ostracised for marrying a non Brahmin, is leading the life of a dishwasher in Colorado as a Bhutanese refugee. Her poverty has made her touchy and sulking; Manasa has been reduced to her father-in-law’s caregiver in London despite being an Oxford educated academic achiever.  Agastaya, a successful doctor, cleverly hides the fact that he is gay and has a possessive boyfriend back in New York.

Thus all the siblings have something to flee from and this forms the plot of Prajwal Parajuly’s novel ‘Land Where I Flee’. It is a novel about family relations, social disparity and prejudices, the quest for individual freedom and acceptance with an ever pervasive undertone of the politics of identity of the Nepali speaking people in the subcontinent.

Parajuly treats his characters with a non forgiving yet sympathetic wittiness. Prasanti, the transgender and a close confidante of Chitralekha adds to this wittiness both as a character and through her acerbic comments. Prasanti is used as a degree of hopelessness while describing ‘the ex chief minister whose chances of coming back to power were as high as Prasanti’s giving birth’ or when Agastya realises that he enjoys far less freedom than the eunuch. The three westernised siblings try to make peace with their environment much of which has been alienated from them. They compare their place of origin and their places of residence in different parts of the Western world. This comparison is drawn in Parajuly’s characteristic wittiness.

Apart from human relationships, insecurities and prejudices the novel also deals with the issue of stereotypes about the Nepali speaking people in the subcontinent as well as the disparities and stereotypes among the community itself. The degree of ‘Nepaliness’ that is raised often while dealing with the Nepali refugees of Bhutan is beautifully portrayed. However that does not make the novel, in anyway, a propagandist piece of literature dealing with politics of identity. Parajuly has used the helplessness of the Nepali refugee or the disparities in the Nepali Hindu society to depict the universal quest for personal and political dignity.

Most parts of ‘Land Where I Flee’ were written while Parajuly was a writer-in-residence at the Oxford Centre for Hindu Studies. It is his first novel and it contains the freshness and colourfulness of his first collection of short stories ‘The Gurkha’s Daughter’. Son of an Indian father and a Nepalese mother, Parajuly mostly lives in New York and Oxford and Gangtok, thus making him a global citizen with varied sensibilities and cultural experience. This global outlook is reflected in his work that gives his writings universal appeal despite being anchored deeply into the Nepali society.

The stories in-between – The Legends of Pensam