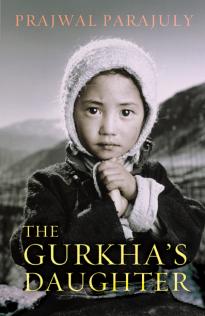 The Roots and the Roving Spirits: Review: The Gurkha’s Daughter

Spread largely over three countries- Nepal, Bhutan and India, the Gurkhas are an enigma of sort. With the stories about their loyalty, ferocity and sheer daredevilry, the Gurkha identity is a colourful mix of myth and reality. Whether he is in his native land or is living as a migrant in a strange country, the Gurkha, to others, carries an air of Himalayan mysteries. Thus when one writes about the Gurkhas, he or she has to tread cautiously between conforming to the stereotypes or disappointing the prejudiced majority of readers by not providing them with the usual fabled descriptions about the Gurkhas.  When the author belongs to the Gurkha community itself, he is burdened with the added responsibility to avoid taking upon himself the task of eliminating all prejudices and misconceptions about the community at one go. Prajwal Parajuly has successfully overcome this challenge in The Gurkha’s Daughter, a collection of eight short stories. The stories deal with the experiences of the Nepalese people and the Nepalese diaspora as well as their relationships among themselves and the others.

“The Cleft,” depicts the story of a 13-year-old servant girl Kaali, disfigured by a cleft palate, who plans to flee Nepal for a better life for herself while on a journey with her dominating and verbally abusive mistress. Set in West Bengal, “Let Sleeping Dogs Lie” is about the impossible dilemma of a shopkeeper Munnu, tormented by the daily shoplifting habit of a prominent family’s teenage daughter. “A Father’s Journey” delves deep into the relationship between a father and his daughter. It starts with the naïve questions of a six-year-old girl. But the conversation between her and her father encompasses various issues like caste and stereotyping. As the story develops we see the little girl growing and encountering various facets of growing up as a woman as well as changing relations with her father. “The Gurkha’s Daughter” is about two nine year old girls who try to get a peek into the world of their fathers. They don fake moustaches to imitate their fathers talking about booze and Brits. In “Passing Fancy”,  Parajuly weaves a web with the psychological aspects of the protagonist. The depiction of the inner and the outer world is perhaps at its best in this story.

Parajuly is sympathetic with his characters. Yet he does not spare the chance to present their ignorance, their superficiality, their stereotypes and their limitations with a little smirk. The naïve confidence of people who foolishly think they understand someone or something is depicted throughout the stories in either directly or indirectly. Different perspectives based on cultural differences as well as ignorance and stereotypes is another major aspect of the stories.  The Gurkha daughters, are not able to grasp their fathers’ true situations. Their understanding of their fathers’ world is as superficial as their fake mustaches. Their only thing they know about Britain is that there is no mud. In “No Land Is Her Land”, a dysfunctional clan of Bhutan refugees pursues the illusion of the American dream. The American dream is as illusory as the image of the picture perfect family they desperately try to convey to their green card interviewer.

The son of an Indian father and a Nepalese mother, Prajwal Parajuly was raised in Sikkim and educated in Oxford.  While doing masters in creative writing at Oxford he became the youngest Indian ever to secure an international book deal, at 27. He still divides his time between New York, Oxford and Gangtok. Thus his own background is a perfect example of the complexity of the Nepalese experience that he depicts in the stories. The struggle of the two Nepalis to overcome prejudices in a strange land depicted in “The Immigrants” is reflective of his own struggle. His own indignation is depicted when the protagonist says “When I told people I was of Nepalese origin, they instinctively asked me if I had climbed Mount Everest.”