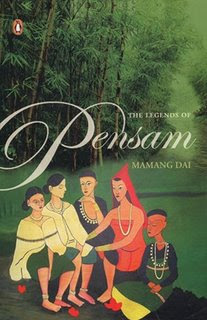 The stories in-between – The Legends of Pensam

The Legends of Pensam by the noted poet Mamang Dai is a delight to read. As with her poems, the excellent lyrical quality in the narration is the first thing that caught my eye when I started reading this book. Arunachal Pradesh is a land of fantasy for most people due to it’s inaccessibility. Added to the fact, you need an Inner Line Permit (ILP) to visit the place. Arunachal Pradesh is the home to many tribes and due to our ignorance about them, a lot of it is left to our imagination. Although, the state is hardly 150 km from the place where I stay but it has been always been exotic to me. Pensam in the Adi language means ‘in-between’, and it can be interpreted in various ways with reference to the book. It might mean the mythical ‘in-between’ place in the mountains of Arunachal Pradesh. It might also mean the stories hidden in between the lines of the story. The genre of the book itself is in-between a short story collection and a novel as the stories are intricately inter-connected.

The book is divided into four parts telling an intricately woven web of stories of a tribe across a few generations. The Adis have an oral tradition and the beauty of it is wonderful storytelling. The book starts with the story of Hoxo which has a captivating title – The boy who fell from the sky. He was found in the mountains by the man he later on called his father during a hunting expedition. When the villagers asked about him his father simply said that he fell from the sky and everyone accepted it. The Adis are superstitious and have a set of premonitions defined. When some unpleasant activity happens, they consider that the spirits are displeased and call a shaman for help. Under the malign influence of spirits anything can happen in a life – persons get unnaturally killed in hunting expeditions, children suffer strange illnesses, houses get gutted in fire, husbands go astray. These things happen because certain rites are not performed by people of this or earlier generation. Shamans play an influential role in the tribe as they have the power to exorcise the bad spirits and restore some order in life. So no one was surprised when Hoxo’s father died in an accident duing a hunting expedition. He was mistaken for an animal. Hoxo’s father saw a serpent in his dreams a few days ago.

The stories also recount historical developments in the tribal area which was opened up to the world in the 19th-20th centuries. In 1911 a British political officer, Noel Williamson, who had been working among the tribes for two decades, set out on a mission to explore the course of river Siang flowing through the territory of Adis. An angry Adi struck him down in the village of Komsing. Though the exact cause for this was not known, some believe this could have been due to seduction and romance between a local woman and a Britisher that led to this terrible punishment in retaliation. Not only Williamson but 48 of his accompanying sepoys and coolies were also killed. This massacre resulted in a punitive expedition by the Britishers in 1912, the Abor expedition, to capture the culprits and banish them to Andaman Islands. A memorial stone to Williamson was erected in Komsing where it stands to this day. After this the whole of Siang valley was opened up for exploration and several villages brought under British administration. Presence of migluns (foreigners) in the region had become common thereafter.

Then there was also the romantic story of the beautiful Nenem and the young British officer David. Although, it was not clear as what sort of future plans did they have but the end result was that it did not become successful. Later on Nenem married Kao and had a daughter. Their village is ravaged by floods after a few years and they have to move to another place. That’s when she cannot take the pain and goes to the river one day only to suddenly collapse and pass away.

The book is a compelling read fantastically presented by Mamang Dai. It is a kind of documenatary record of stories passed over generations through oral tradition and with a presentation that is in-between a fictional novel and a short story collection. A must read book.

Quests, Identities And Secrets – Book Review of ‘Land Where I Flee’

10 WAYS TO NOT BECOME A WRITER!