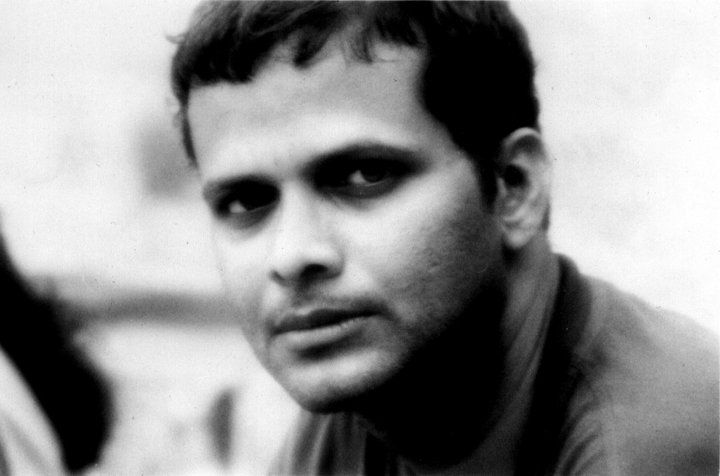 Jerry Pinto is a man in love with words. And Boy! Does he have a way with them! Poet, editor, journalist, author- this man has worn many hats and carried off each of them with aplomb. He has to his credit over a dozen books including Helen: The Life and Times of an H-Bomb which won the National Award for the Best Book on Cinema, Em and The Big Hoom, the semi-autobiographical novel that sent us scurrying to him for an interview in the first place!

Fried Eye had a wonderful time talking to Jerry during the Guwahati Literary Fest. We present you the immensely talented Jerry Pinto at his irreverent best! Among interesting ones, he said he would like to write a book on Kangana Ranaut, and that he would love to be teleported to be a part of the Last Supper. Read on… FE:  In ‘A Bear for Felicia’, you’ve given your characters some pretty elaborate names. Thurston Gustavus Buckridge III, the bear; Amaranita Sarsaparilla Gloriosus, the doll; Thunderbox Permusin Peterkar, the toy mouse. If you had to name yourself all over again, what would it be?

Jerry: When I was growing up, I used to feel that the name, Jeronimo Maria Pinto was an awful tragedy. It seemed like nobody could pronounce it. My teachers called me Jeromania, Jeronamia, Jeromano. Anything but my name. I used to wish I had a simple name like Mark. But when I got to college and told people my name, then women would go, “Ah! Jeronimo. What an unusual name!” It got me a lot of attention. So, I made my peace with it. But if I were to be named again, I’d like my surname to be Rockfeller, you know, and own the Rockfeller estate.

Jerry: Ah! The elaborate, ornate names I use in my books are because I spent a lot of my life naming things. My umbrella would be called Jonathan, my shoes something else. Everything had a name. So, that seeped into what I wrote. You don’t go very far from yourself when you’re writing. It’s who you are.

FE: Ha ha! You can’t escape this one! So, Surviving Women came out in 2000. It’s been a few of years between now and then. So tell us now, would being a sea horse solve all of man’s problems?

Jerry: You know, I have a feeling that if men did a lot more of bringing up children, it would be a much kinder, gentler world. When a baby is put into your hands, the first thing you think is, “My God! How small it is! How fragile! And how easy it is to drop it or to crush it or to have something horrible happen to it. I think a woman’s gentleness has got a lot to do with rearing a child. It’s a shame that men aren’t expected to deal with children at all. For women, it means being lumped with children all the time and for men, it means being denied the opportunity of being gentle and nurturing and loving and experiencing a child fully. Even if it wouldn’t solve all of the world’s problems, it would go a long way in gentling everybody if men and women brought up children together.

FE: You’ve written books on Leela Naidu and Helen- some very bold, path-breaking women. Who among the current crop of stars would you choose to write a biography on?

Jerry:  Kangana Ranaut, if I had to choose. I was asked to subtitle Queen, which is a lovely film, and halfway through, I turned to the director and said, “That heroine! Quite a find!” I had no idea it was Kangana! When he told me, I flash-backed to that scene in a movie where she takes off her panties and gives it to someone, the movie where she’s playing this Parveen Babi-esque character and then I saw this TV interview of hers where she talks about how improbable it is to act when you have to do one line every hour… she seemed to be saying things that I hadn’t heard other film-stars say. Very out of the box.  To me, I don’t care if she does very well later or does badly. She’s simply interesting.

FE: Nabokov has this to say about inspiration: “A prefatory glow, not unlike some benign variety of the aura before an epileptic attack, is something the artist learns to perceive very early in life.” Is this how you feel too? Or is writing a more deliberate, more tangible process for you?

Jerry: When I was growing up, I always had the belief that writers were this elite species of terrifyingly talented people and I would never be a writer. So, I was just happy to be what I could be… happy to be a reader. I never actually thought I’d be one myself! But now that I am one, let me tell you, I like writing. I enjoy writing. It’s supposed to be a lot of hard work and discipline. Ya! Ya! Ya! It is all that. But I enjoy that too.

Inspiration, for me, is the moment when you recognize what you want…what I want to be writing that day and then things start rolling. From then on, it’s work. It’s not like I see two people talking and I think, “Yes! That’s the story I want to tell.” For me, a line could trigger me off. They are words and words will always trigger off more words. Books are how other books happen. So, if you don’t like my book, find out what you don’t like about it and write the book you would like to read. FE: A. personality trait/quirk that you’re sure you’ve inherited.

A mental quirk? The inability to travel, to be anywhere at any point without several books with me. My father would go to work with two books…sometimes three, every single day. I mean I’m here at the lit fest for three days and I brought 9 books with me just in case I ran out. And I’ve bought another sixteen at the book fair. So I have 25 books to take home now! (laughs)

FE: Your early years were difficult, to say the least. Had you been able to, what advice would you have given your younger self?

Jerry: Well, I’d tell him… There’s nothing much you could do about the way things are. It’s not your fault. I spent a lot of time thinking- if I did this, then this would happen. If I studied really hard, things would fall into place. Or if I didn’t behave badly, I’d be rewarded by my mother feeling a little better. Your world is so rich in magic when you’re a child. You believe in goodness. If you do something good, good things will happen. But it isn’t that way. It isn’t. So I would tell my younger self to just chill, you know. Take it easy.

FE: Okay! Fun questions! A fictional universe you would love to be a part of?

Jerry: Alice in Wonderland. Mainly because when you enter such a universe, it becomes clear why things are the way they are. Alice is dizzy and dazzled in there. But, since I have a mathematics background, I think I have some idea of what Lewis Caroll is trying to do and I’d fare better.

FE: Ah! You were a math tutor once, weren’t you?

Jerry: Ah yes! The things one has to do for money! (shakes head)

FE:  I agree! Ok. So, tell us. A language you’d loved to have been able to speak?

Jerry: Oh! Oh my God! Every single one! I mean, I listen to Axomiya being spoken and I want to speak it, you know? Every time I land up in another country and hear people speak I’m like, “Wow! What’s that about?” You just want in on the secrets of the language. So yeah! Every language in the world!

FE: The world would be a better place without?

Jerry:  It’s very clear that the world would be a better place without human beings. It’s like a completely function al system that, as soon as you insert a human being into it, he does everything to destroy it. It’s incredible how much we take out and how little we put in. The only good thing we put in, really, is shit. Literally, because shit makes good manure.

FE: That’s an interesting take! Ok, if we could teleport you right this moment, where would you like to go?

The Last Supper. I think it’s a really interesting bunch of people sitting there with Jesus. There’s a moment in the Bible, “What is Truth?” said jesting Pilate and would not wait for an answer. Abbe gadhe Pilate! That man is a gyaani, you may not think he is a god, but he’s a truth teller, a Tirtahankar, a man of enlightenment. Kuch toh sun yaar Pilate! I want to amend that. I’d like make Jesus answer big fundamental questions..Why are we here? C’mon tell me.. Tell us more stuff. Give us more gos! I’d like to see how they ate and drank with the foreknowledge of doom.

I’d like to be chatting with the Buddha as well, walk a few miles, and ask him about non-attachment. I mean, c’mon! You even like Ananda! He’s been with you for years. Ananda never achieves enlightenment and Buddha feels sorry and gives it to him in the end. Sorry is attachment, dude! You’ve got it wrong there!

FE:  Fascinating! We hate that this conversation has to end. It was absolutely incredible talking to you! Thank you so much Jerry! Fried Eye wishes you all the best!