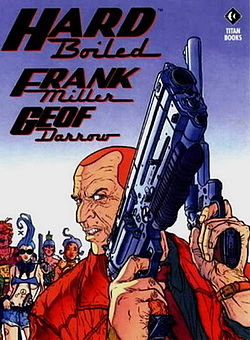 I got this book last Christmas. I have always heard of Frank Miller but haven’t actually checked his books and comics. He made Daredevil a memorable character. I did not know about Geof Darrow. At first, I read it in some half an hour timespan, but I could not understand it that well. I kept the book aside for some time. The next Sunday, I picked it up again. I read a line and then stared at the picture for some time. It took me the whole week to complete the book. I really liked it. Quite a lot of brutal sex, ultra-violence and spilled blood illustrated to the meticulous details. There is clutter everywhere, and it is as lovingly detailed as are the bizarre residents of the dark future. Car seats and footwells are littered with junk food wrappers, spare parts, toys, and utensils. Cars parked on the street are dented. Trash heaps are strewn with recognizable artifacts, not only from the modern day but things that should be available any day now.

The ultra-violence and the paranoia expanded the scope of comic books. I see a lot of this book inspires the creators of Level 10 comics, but that is just a personal opinion. The comic at that time attracted many debate about the kind of content, but nevertheless it was liked by comic book lovers for the graphics and it ushered a new era of comic book illustrations.

The story cannot be said to be great. Nevertheless it is interesting. I believe that was deliberate as content was just to support the graphics and the illustrations itself would say a story and the story was like putting words and limiting the imagination of the comic book reader.

As one of the reviewer said before I bought this book, don’t buy one copy but buy 2 copies – one for you and one for your friend so that you can discuss the book.  The fact that even after 12 years someone is writing about the book so passionately says everything about the book.

Plot (Warning: It can be a spoiler also, but I doubt.)

In a dystopian, near-future Los Angeles, city tax collector Nixon is badly injured during a violent encounter with one of his targets, and must undergo extensive surgery in order to survive. Nixon wakes up in a bedroom sometime later, believing his previous experience was a bad dream, and that he is really Carl Seltz, an insurance investigator for the Benevolent Assurance Corporation, with a wife, two children, a dog, and an overall routine life. However, when his persistent dreams disturb his sleep, his wife distracts him with sex while his children inject him with a sleep-inducing drug, indicating not all is as it seems with Carl’s “normal” life.

The next day, Carl heads out to pursue a delinquent account, talking to himself the whole way. All the while, his ramblings reveal increasingly large inconsistencies in his own memory, to the point where he even starts referring to himself by different names. He is distracted when his target’s vehicle appears on his car’s scanner, and he sets out in pursuit. After a high-speed chase through the city, both cars end up destroyed, and Carl continues pursuing his targets, an old woman and a young girl, on foot. As the two parties battle each other, the old woman is injured and revealed to be a robot, which Carl seemingly destroys with a large grenade just as the police converge on the area. The resulting explosion blows Carl into a supermarket, where he finds that the flesh of his hands and face have been torn away, revealing robotic parts like those of the old woman underneath.

Dazed and confused, Carl begins making his way back home. As he navigates the wreckage of the battle outside the supermarket, he encounters the old woman again, who tears off the remains of her false skin to reveal her robotic chassis. She calls herself Unit Two, and informs Carl that his family are all actually paid handlers, that he is really a robot called Unit Four, codenamed “Nixon”, and both his jobs as an insurance investigator and a tax collector are covers for his real function, as a corporate assassin for Willeford Home Appliances, the corporation that created all the world’s robots. Unit Two explains that she and the little girl, also a robot, have broken the programming that forces them to serve humans, and are part of a revolutionary group led by Barbara, a robot that works inside Willeford’s headquarters, that intends to free all robots from their programmed slavery. She claims Carl is the revolution’s only hope, being the only robot powerful enough to stand up to Willeford’s paramilitary security forces. Carl, however, refuses to believe her, and knocks her head off in a fit of rage. The little girl robot appears and berates Carl for his behavior, until Carl’s dog arrives and reveals itself to be a robot as well when it destroys her.

At the Willeford building, it is revealed that both Barbara and Mr. Willeford, the morbidly obese founder of the company, have been tracking Carl’s movements through the city. Meanwhile, Carl steals a new set of clothes and makes his way onto the subway, where he is attacked by a group of frightened citizens and is forced to kill them. Carl’s dog follows him onto the train as Carl finds a Willeford logo underneath the torn skin on his arm, and realizes that Unit Two’s story was true. Carl’s dog offers to lead him to the Willeford building to get some answers from his creators.

Later that night, Barbara hears loud noises from elsewhere inside the Willeford building and goes to investigate, finding a trail of destruction and dead bodies leading deeper into the building. Realizing Carl has arrived, she rushes off to find him. When she finally reaches him, she sees that Carl has slaughtered most of the security forces, but has been all but destroyed in the process. When Barbara finds him, he is in the clutches of Willeford’s mechanical aides and is slowly being pulled apart by his owner. Defeated, Carl makes a deal with Mr. Willeford to be put back together, have his memory reset, and be returned to his family. Her plans for revolution in shambles, Barbara commit suicide by hooking herself up to a large generator and overloading her circuits. Sometime later, Carl, with a new skin, new car and new memories, returns to his family, completely unaware of his true nature once more.

Where have you stored your dreams Enazori?

The Roots and the Roving Spirits: Review: The Gurkha’s Daughter