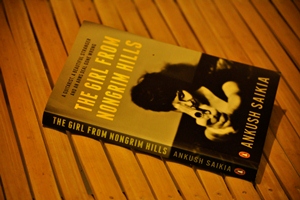 The Book- The Girl from Nongrim Hills

I have always liked reading noir, but all of them had something missing for me. I could not relate with the places and found it difficult to visualize the stories and practically ended with more or less the same visualization. This was getting monotonous when I came across this book. The story in this book is set in Shillong,  the town where I spent 22 years of my life. I am aware of the situation in Shillong,  that helped me relate facts with fiction. It was not just Shillong that attracted me, it was the cover. A cute girl with devil eyes pointing an automatic to the reader was more than enough to grab the book. In fact, I fell in love with the girl even while she is pointing a gun at me, just like the protagonist Bok.

The story of the novel is about Bok,  a guitarist in a wedding band, who gets trapped in a dangerous situation. His brother Kitdor(Hep) gets involved in an arms deal for a militant group where he lost 50 lakh rupees. He is given one week’s time to repay the money or lose his life. He asks Bok for help and while trying to help him, Bok himself is trapped in a dangerous situation. He meets a beautiful woman who offers him a job and in return he would get the money he wants. Bok finds himself in a murky situation when he finds himself cheated while time is running out of his hand to save his brother. He is running against time to save both himself and his brother. The story is about how he gets out of the situation, with several twists and turns in the plot.

The book has a fast paced narrative and keeps the reader at the edge of his seats anticipating the next twist. The story can highly be related to the present situation in Meghalaya, the political and under-world nexus, the extortions by the so called rebel groups, the coal mafia, how the local youth get involved in murky situations for some fast money. I am not sure if Ankush had this in mind but the story seems quite real and that is one of the key USPs of the book. Most likely you will finish the book in 2-3 reads.

While the book falls in the noir genre due to the story but it also falls in the genre of crime thriller due to the style of writing. So, it might disappoint the hard core noir fan who is used to stylishly written stories. Having said that, the book does pretty good and delivers what it promises.

Ankush does well in describing various places in Shillong and at times I felt like I was Bok running around Shillong. He also articulates well the emotions Bok goes through during the time. There are times when Bok remembers his chilhood days and the memories he had with his brother. Ankush points out minute things that anyone growing in the 90s in Shillong would identify with.

The House With a Thousand Stories- Aruni Kashyap