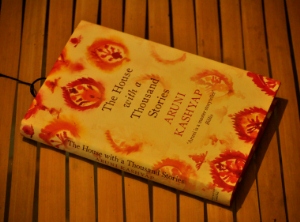 The House With a Thousand Stories- Aruni Kashyap

The story starts with Anil (Pablo’s first cousin) coming from the market with some hot rumours  he heard, which was kept a secret till the end by the narrator. The story is narrated then by Pablo who is born and brought up in Guwahati and was leading a comfortable life until he visits Mayong, his father’s village twice in between 1998 and 2002.

When I first heard about the book, I was told by Aruni that the story is about a young boy Pablo and set in Mayong against the background of secret killings and  army misdeeds. To be frank, at that time I was not much interested as Mayong which is popular for it’s history of Black Magic and Secret Killings are topic that can easily tend to make you exaggerate facts and provide a skewed perspective.

However, knowing the style of Aruni’s writings, I went ahead and bought the book. I must say that the book has a compelling narrative that kept me awake during the days I was reading the book.

Pablo is a young boy who is visiting Mayong for the second time in four years for his aunt’s wedding. He first visited in 1998 when his father’s elder cousin Bolen dies. He recollects those moments and finds that many things have changed in the last four years.

Aruni draws a different picture of Mayong and shows how the residents of Mayong village live, their day to day struggle by using  example of the lives of the members of the large family residing in the house that he visits.

Although, Aruni touches the topics of secret killings and rape of village women by army and the fear it generates, and many other stories interlaced with his stories, but he never loses the track of the main thread- complicated love stories  – one each in each generation – that has a repercussion of its own kind; A wedding that brings various people and stories with it and ends tragically; An ever ailing grand mother who is in her death bed every time there is a major occasion creating extra worries; An aunt who likes to keep everyone under the iron grip of her hands; A cousin who likes to add some spice to every thing he says, hurting people around.

The narrator of the story is like a friend who needs to be heard about what goes into his mind and the reader is like good listener who silently listens to the story trying hard to understand what is going on through the mind of his friend. The story is being told by Pablo in 2006 when he has come for vacation and his friend Mridul, Bolen’s son comes for a visit in Guwahati and talks about the past.

The story moves in a non-linear way just like memory where things are not clear and you continue speaking about the different parts of the story in a haphazard manner until you come to the tragic end of the story and  you break up. You kind of get so attached to Pablo as the book progresses who is so innocent and sees things that he has never witnessed  before. He is very sensitive but never tries to question or argue anything. He is always trying to analyse the situation and understand it. That is what I liked most about the book. He tells even the hardest fact with so much of ease.

The fact that the book has left me thinking about it even after completing it for days speaks volumes about it.

The book is essentially an Assamese book written in English considering its style of storytelling (even if we ignore the use of colloquial Assamese words).  Aruni being a poet pen downs a story with a lyrical flow and makes the reading an enriching experience.

Aruni comes up as a confident writer without bothering about the commercial viability of the book and it is a mark of a great writer. I wish to read more of his books in the future.

Precautionary note: You will like the book if you are a good listener otherwise you might get irritated.

The God of Small Things: A Review