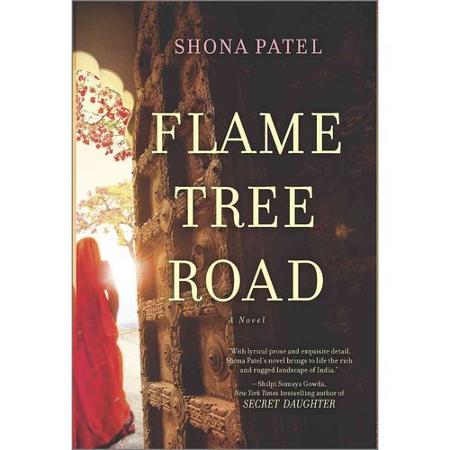 Flame Tree Road is apparently the prequel of Shona Patel’s debut novel Teatime for the Firefly. I haven’t read her previous novel but going by the reviews it has made me curious. Flame Tree Road is the story of the most loved character of her previous book, Dadamashai and what sort of events in his life made him the person he is. The story starts in Sylhet in 1871. Biren Roy’s mother Shibani was a sort of tomboy before marriage and his father, Shamol Roy, had to leave his studies halfway to support his family. Biren Roy was very clever, inquisitive and always behaved ahead of his age. He knew how their parents loved each other and his father respected women. Early in his life, he came to know that people in the society treated women as burden and widows as ghost. While he was still trying to understand the reasons for that, his father died due to an accident in the factory he worked in. He saw how his beautiful mother was made to shave her head and look ugly while thrown away from her home to the woodshed. She was not even allowed to meet her best friend Apu. He was shaken by the cruel treatment to widows which he had not imagined when an old fisherman told that about widows are worse than ghost.

The factory owner, Owen McIntosh, offered to sponsor the education of Biren and his brother Nitin feeling regretful of Shamol Roy’s death and knowing that Biren would growup to a wise man if properly educated. Biren’s father believed that English education broadens mind and empowers them, so Biren took up this opportunity and decides to study law to help all women, especially the widows.

Studying in St. John’s Mission, Calcutta he received various vocational training apart like carpentry, leather-work, etc apart from normal studies that would have otherwise been considered as low caste jobs if he would have studied in a village school. He goes on to study law in Cambridge and he saw  that women in England also don’t receive equal treatment and feminists were fighting for woman suffrage. He came back to India hoping to incite changes in the society by academic equality to women.

Coming back to India, he finds a job as a Junior Assistant to District Magistrate in Silchar, Assam, which is quite unusual as he was the only Indian of officer rank in the civil services. He soon realises that he was chosen for the job as a bridge between the European community and the locals. He could speak Queen’s English, Bengali and Sylheti in equal fluency. The locals did not like bilayatis, the British were clueless about the local culture. Biren found himself in an awkward position where local looked at his as a traitor and the British though made him stay in the European quarters does not think of him as their own. There were different kinds of communities staying there and often had clashes. However, they were all united when police arrived. Biren was supposed to be a peacemaker and find a solution to this.

Biren did an excellent job trying to understand the complexities but he soon found that he was losing his vision of starting a girls school. The files in the education department seems to move slowly as education is not a primary concern for the administration. He becomes adamant and talks to  Reginald Thomson when he recommends a local educator where Biren meets his daughter Maya. He falls in love with Maya and he goes on with his mission with renewed energy and finally he achieves.

Ms. Shona Patel has carved out a brilliant novel with a poetic charm in her story telling. I was hooked to the book and lost my sleep to complete the book. She has addressed a grave issue of the conditions of widows in India during the 19th century keeping it perfectly balanced by providing the perspective of various people in the society. Biren means warrior and he believed himself to be one and tried to maintain it throughout his life. It was not easy fighting for girls education at a time when women were part of a weaker section of the society. Ms. Patel also touches upon the topic of other social issues like inter-caste marriage. It is an interesting to read about the formative years of a warrior. Towards the end however the book had a few loose ends and I believe Ms. Patel could have added a couple of chapters more towards the end.

It is a brilliant read and I wonder why there is so little publicity of the work. Perhaps, the background of the novel is not so interesting to the star book reviewers around the world. In fact, I came to know of the book as I accidentally clicked the link to her blog which I had bookmarked long time back. I just hope that her book gets a wider publicity.

The Cosmopolitans redefines Anjum Hasan as a writer