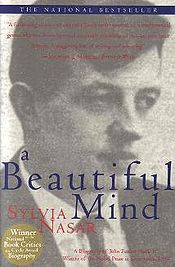 How many of us, who are not practising mathematicians or mathematics students know about any mathematician? The number would be very small. It has got nothing to do with the fact that mathematicians are not very famous, but its because there is a general perception that what mathematicians do has got nothing to real day to day life, its as abstract as anything in this world can be. Yet another thing can be the lack of biographies of great mathematicians. In this aspect Slyvia Nasar’s excellent book “A Beautiful Mind” later made into a movie of the same name starring Russell Crowe and Jennifer Conolley is indeed a great boon.
The book chronicles the journey of a brilliant mathematician, John Nash through his years of creativity and later his mental turmoil. Nash was once a highly eccentric and a first rate genius graduate student at Princeton University, then the world centre for mathematics where he invented one of the most important theory of rational human behaviour of our times – game theory. It was ironic that a man who invented a theory of rational human behaviour must turn into a highly irrational being in his later life. Such was the tragedy of Nash that at the age of 31 after a happy marriage he suffered a devastating blow when he was diagnosed with schizophrenia. For more than three decades after that one of the most brilliant minds of our times spent a ghost – like existence in the hallowed walls of the Princeton Mathematics Department only to re – emerge in 1994 to win the prestigious Nobel Prize and instant world fame. Nash story told in a poignant manner by Nasar is worth a read by everyone who knows the anguish and turmoil that life can have on a person.
This award winning biography is a drama about the mystery of the human mind, the creation of beauty, a triumph over incredible adversity and the healing power of pure love. It is at the same time fascinating and disturbing, the book is in one word “astonishing” that opens up a vivid window into the life of a man and the math that he does. A superbly written account of a man who has a dark madness that is at times illuminated by his most creative spirit. The book opens up vistas to everyone who wishes to learn from the great. It teaches us what love can do even to a person who has no sense of it. A mini classic in its own right, Nasar should get all the kudos for managing to keep the book at a readable level for the non mathematics audience with no hardcore math in it.
The book is a must read with something in it for everyone. Be it the student who gets to know the trials and tribulations in an academic’s life, or be it the lover who can learn what the power of true love really is. Even someone as far removed as a politician will enjoy the book, as Nash’s contributions are widely used in giving us predictions of an election. All in all a great book to read and an even greater mortal to know about. I would highly recommend it be read after watching the movie to get a larger picture of the story.