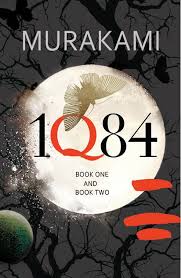 It has been some time that I have been procrastinating reading this book- say for almost two years due to the size. The

complete trilogy of 1Q84 (Q-teen eighty-four) is close to 1600 pages. So, you must have understood why!

However, once I started I was completely engrossed in the book. 1Q84 is the story of a woman Aomame who was enticed by a strange taxi driver to take a route through an emergency escape that will help her reach her destination in time and avoid the traffic.

Aomame starts to see bizarre things happening around her and noticing new details. For example she notices the policemen carrying semi-automatic pistols but as far she could remember they had carried revolvers. On checking newspapers, she discovers many more details of which she has no recollections. She also discovers that there are two moons in the sky. She comes to the conclusion that she entered a parallel world similar to the real world when she took the emergency escape.

Tengo is a mathematics teacher in a cram school and also an aspiring author. He has been assigned by his editor Komatsu to rewrite a manuscript Air Chrysalis which is written by a 17 year old girl who writes by the pen name Fuka-Eri. Komatsu wants to enter the novel for a prestigious award malking her a literary prodigy. Tengo is not sure as how wise it is take up the project and asks for meeting the author before starting to work.

On meeting Fuka-Eri, Tengo discovers that she is dyslexic and the manuscript was written by someone else based on her story and they submits it to the contest. Tengo learns that Fuka-Eri’s parents were members of a commune called “Takashima”. Her father, Tamotsu Fukada was Ebisuno’s friend and colleague, but they did not see eye-to-eye on their subject. Fukada thought of Takashima as a utopia; Ebisuno described the commune as a place where people were turned into unthinking robots. Fuka-Eri, whom Ebisuno-sensei nicknames “Eri”, was only a small child at the time.

The life of Tengo and Aomame are moving in parallel but soon they find that their lives intersect.  Tengo also finds himself in the parallel world of two moons after finishing the writing of the novel. Towards the end, you find out that the story is of Tengo and Aomame how they meet after a separation of 20 years. Well, it is quite a short way to put it but I could not find a better way to put it in one line. The reason is that despite the novel containing many stories, none of it is complete except the love story of Tengo and Aomame. This leaves the reader wanting more and a feeling of incompleteness which triggers rethinking of each aspect of the book. For example – Takashima which became a religion from a commune is full of mysteries and the book does not reveal any of it. The book talks about Air Chrysalis throughout but does not explain any further or what are the Little People. Perhaps, it is this incompleteness that makes the book so good.

If you have not read a Murakami yet, then I suggest you not to start with this book. However, if you are a Murakami fan you will definitely like it. It has all the Murakami elements, like fantasy, Japanese folk references, references to classical music, etc told in a gripping style.

P.S. – The size of the book makes you a social moron while you read it and leaves your girlfriend thinking that you are cheating on her. Read the book at your own risk.