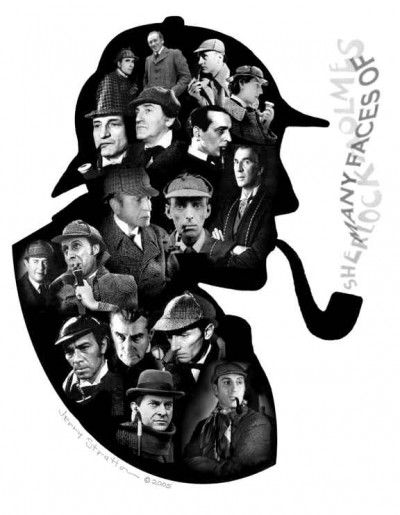 Sherlock Holmes, a character conceived by Arthur Conan Doyle in 1887 holds the Guinness  record for being played by the most number of different actors from the time his books and stories started to inspire movies and TV shows. Not just his own stories, he has been widely used by other authors too in their books as a supporting character.  My introduction to Sherlock happened in the year 2007 when a friend gave me a collection of his short stories. I loved it so much that I went and bought the book for myself the very next weekend. On and off, I kept reading Sherlock stories with awe and an innocent pleasure.

Sherlock’s stories had a charm of old London setting and manners of some very sophisticated villains involved. While the modern crime fiction has nukes, machines and somewhat senseless violence, Sherlock’s cases had deception and crime and skilled opponents who were not dumb or plain crazy to act on whim. He solves all his cases on the base of logic, forensic sciences and observation alone. One of the most amusing and endearing thing about Sherlock is his master disguises which are always elaborate and much practical aid to the storyline.  At times, he appears to be a show off and too egocentric but it works for him. Not because he is the main character and can carry it off but I feel this is his mode of keeping general public away from him. Imagine a much indulgent Sherlock who is swamped with any trivial case or incident. No, there is no exclusivity and fun there. One another reason I am impressed with his adventures is the fact that I can safely pass this book to any and all age groups and it will make anyone a fan.

Mention of Sherlock should never be without introducing Dr John Watson, his friend, assistant, sometimes flat mate and the first person narrator of most of the stories. He alone knows most about Sherlock and even though he is most irritated and troubled by his habits, he stays close and loyal to Sherlock. Needless to say he is the fun quotient in the books as much he is the one to keep trying to change Sherlock’s bohemian life style. Not that he is much successful.  Sherlock appears to be a cold person when he meets people but his love for mysteries and adventures is evident from the lengths he goes to solve them and doesn’t rest till he has beaten his opponent. He thinks steps ahead of usual criminals and is most pleased to prove his intelligence to the police and the criminals, thought he doesn’t try too hard to claim credits.

Many among the young generation who had not read about Sherlock before, were introduced to his brilliance by the not so recent movies made on him –  Sherlock Holmes (2009) and Sherlock Holmes: The game of shadows (2011) . The movies further highlighted the eccentric habits of Sherlock, his knowledge and also that he is a skilled marksman and can fight well too. The movies kept the original setting intact and so it was a different experience to watch them.

But the reason for the recent popularity of Sherlock and the origin of word “Sherlocked” , is Benedict Cumberbatch who plays a modern-day version of this private detective in a TV series “Sherlock”. The series has changed the original setting of the books to a present-day shady part of London and shows the extensive use of modern science and social media tools. A super cute face, an amazing voice added to the original wit and intelligence of Sherlock has made this character and the actor too popular among the girls.

Sherlock is open to adaptations of any form, and that has been happening since long but one adaptation I personally felt good to see was in the TV show “Elementary”. Set in New York, here Watson is played a female character who is employed to look after a recovering drug addict Sherlock. Who knows tomorrow we might have a female playing Sherlock Holmes!

Till then, read and do watch Sherlock Holmes effortlessly (or not) solve (for sure) the crimes that catch his fancy.