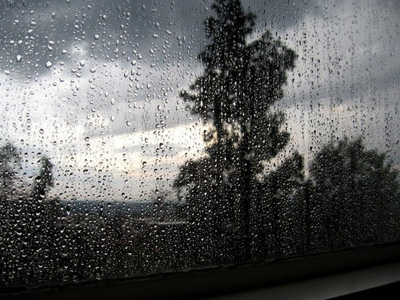 An Ode To The Rain

The cruel sun with its bright hues was gaining its glitter with each passing day. The sweltering heat and the soaring temperature were showing no signs of scaling down their intensity. The incessant hours of power cuts were lengthening gradually. Indeed the summer season had announced its arrival. The month long summer holidays were declared in the college and what a relief it was! (Sigh!)
Moving around the house with no specific purpose, I peeped out of the window to stare at the grey clouds, wondering how long before they  reach the saturation point and trigger yet another rainfall. A fortnight of the summer holidays had already passed and finally there was some respite from the “unforgivable” heat. Yes, the monsoons had arrived!

That fine afternoon, as I sat on the verandah of our house, there wasn’t much activity around me sparing the pouring rain. Everybody else in the house had preferred to take a siesta or catch an old movie in some channel. Having just taken a heavy lunch, I sat there with an idle mind hopelessly watching the little and the not so little drops falling from the sky-each one with asymmetrical tenacity-creating little pools of water here and there. There was a time when I and my sister used to conjure miniature boats out of paper and watch them move in such puddles of water with exalted joy and wonder from beneath our umbrellas

Splash! It was just then a little boy jumped on that very pool of water and soiled his uniform. Following a few paces behind her son, his mother was trudging along the path clutching an umbrella on one hand and tugging her saree with the other. For a while I thought the little boy would be rebuked by the mother. But the kid continued hopping towards his home swinging his multi-coloured umbrella over his head.

Unperturbed by this little episode, I sat still gazing at the rain. There was not much life in the roads apart from the odd vehicle which swept along the road, the wipers waving vigorously at its wind shield. The rain had somewhat lost its momentum now. Never the less it was still pouring. I stood up and walked towards the puddle and there I was in the rains. The little drops felt wonderful. It was a sublime moment bereft of the pangs of life. I t was as if the raindrops had stymied all the impending obstacles and urged me to bask in the beauty of life. I was all alone but this solitude had its charm and tranquility. The rain had now ceased to fall and the droplets were gone. The afternoon sun was out and the colour of the sky had changed from the dull grey to a faint scarlet. The wetness of the rain had gone but its beauty pervaded the atmosphere. I walked back to the house with a feeling of gratification and exhilaration .It was something that lingered for a long long time!

How To Save Your Trousers From Getting Dirty