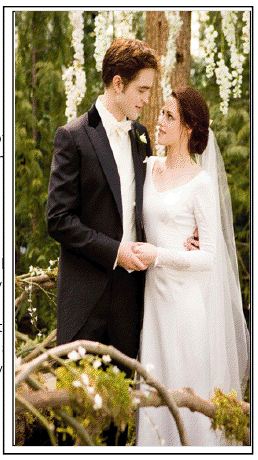 They say good things come to those who wait — and no one knows that better than a certain charming vampire. After several cinematic years in limbo, Edward Cullen finally had that moment when a young man gets to say to his blushing new bride: Welcome to my bloodline.

I know most of you were super excited to see all of the details of the royal wedding back in April,2011 but for some of us, the wedding of the century happened when Edward and Bella tied the knot in the movie ”The Twilight Saga : Breaking Dawn – Part 1.”

The second last installment of the Twilight Saga, Breaking Dawn part -1 released in the world on 18th November 2011. The next big wedding of the year 2011, obviously, after Prince William and Kate Middleton was of Edward Cullen and Isabella Swan.

Everything was absolutely amazing, including the very first – the beautiful oval engagement ring set with 13 diamonds. The Wedding scene was beautiful, overflowing with flowers but also with vampires, werewolves and humans!

What do you expect? It was a wedding where a vampire was marrying a human whose best friend was a werewolf. Edward Cullen looked enchanting as ever but this time it was Bella’s chance to turn heads. She finally stepped out of her tomboyish clothes. Bella’s wedding dress in Breaking Dawn (which is of perfect $ 35,000) was definitely one of the most anticipated looks of the year. Bella’s dress was stunning and it hung to her body like a second skin. It reflected her simplicity and elegance. As she made her entrance, the entire theater filled to the gills with girls sighing in unison. The wedding speeches were hilarious! And yes, “What’s a wedding without a little drama?” Edward finally introduces Bella to his extended family – The Denali clan but apparently they seemed a little uncomfortable and left early. No, not because they felt thirsty around so many humans but because of the werewolves’ presence. Irina still held a grudge for the werewolves and so the vampires angrily made their exit.

Last but not the least, the best man arrives but without a tux because he was too busy trying the new wolf lifestyle. With Jacob’s arrival, the already mind-boggling wedding became a little more dramatic. The best friends (Jake and Bella) meet each other happily and dance in the forest but separate angrily with Jacob telling Edward-“I’ll kill you.” finally the wedding gets over. Bella tells goodbye to her family for forever (she thinks that). They get into the car and speedily make their exit with Jacob’s angry howling background music. And Oh! To be a guest at that wedding….I was in pure heaven. As Jacob says-“I’ll give them this much, they know how to throw a party!”