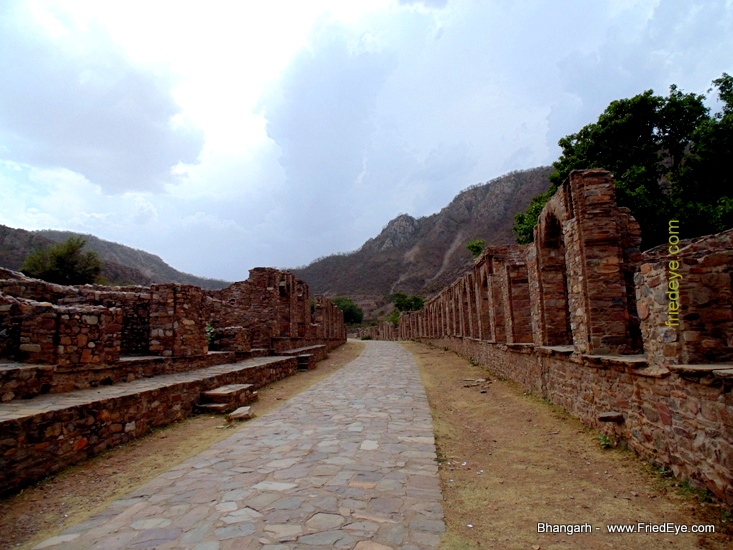 A trip to Bhangarh

Two days back I had gone to Siliserh Lake, Alwar with friends on a road trip… Nothing to gloat about, yes you are right!

We also visited Sariska Tiger Reserve- again not a big deal, right you are!

We saw no tigers there- do I hear a snigger? I admit it is well deserved.

From there we went to Bhangarh Fort, India’s supposedly most haunted place… do I sense a pause?

We went during the day time and encountered no paranormal activity… yes you can smirk now. So what do we write about now as we have nothing new to interest you?

Many a times we are so focused on the obvious while sharing a story that we miss out other interesting facts or notes that might be of your interest or importance at some other time frame or frame of mind!

When we say Bhangarh, anybody who is even minutely aware of it as one of India’s most haunted places, will sit up to read about it, lest he miss out something interesting. Paranormal has always been a matter of intrigue and interest. But in the search for the obvious we miss out… and that’s what my trip report is all about. Of course we will come to the paranormal part too but first let’s start from the beginning.

Bhangarh was never on my agenda. Not that I am a scared cat or a similar object, but ancient ruins that have a paranormal tag have an air of decay and despondency around them which is emotionally injurious to my health and hence I had avoided it as much as I could even when I had the opportunity.

This time we or rather I was in a gung ho mood, raring to go, with the adventurous streak overtaking the sane side of me.

After driving down to Alwar in Rajasthan from Delhi, we three ladies or rather two and a half ladies decided to explore a further more. Sariska obviously was our next pit stop but on a whim I decided to ask about Bhangarh fort and learn some more from the heritage hotel staff.

To my surprise, they affirmed that there had indeed been reports of paranormal activities there and it is forbidden to be there after sunset and before sunrise. That is when we started pondering to visit the place. The 50 km distance from Sariska sealed the decision in favour of Bhangarh. After Sariska we decided to drive towards Bhangarh.

Now a point that is missed out in the whole thing, often (as seen in blogs and the internet information)is that though 50 kms sounds a paltry sum, but that 50 km seemed the longest and toughest part of our 300 km journey to Bhangarh. The roads were bumpy, dusty, through the interiors sometimes without even a proper signboard through villages that resembled ghost towns. That 50 km took us three hours to cover and three females on a road trip through such a stretch is certainly not advisable. But the adventure quotient was high. The terrain was rough and we came across dilapidated havelis, ramparts and temples on the way promising bigger things to come further forward.

The last stretch of ten kilometers was desolate uninhabited dry land which reminded me of the movie Hills have eyes. Coming back through that road to reach Delhi was certainly not something I was looking forward to as it was already 3.30 when we were about to reach Bhangarh. Add to it the strange way the weather was behaving. Inspite of being in Rajasthan, there were dark clouds looming in the horizon threatening a torrent of rain. Already the sun was playing hide and seek and a few drops had rained in between in bursts. Point two that is missed and which I found a frequent happening through personal reports was that there was something about that area, but weather shifts were common there. Squalls and sun alternately and sometimes thunder showers. If *haunted* was in our mind then the ambience was becoming just right for the theme. There was a small hamlet Attached to the vast barren Bhangarh area and driving in from the highway another kilometer we came upon the huge gates of the fort township. As soon as you reach the gates, you become slightly disappointed at the crowd you see which is huge to say the least. Why, but you may mistake it for just a Purana Killa or Qutub Minar any other day what with all the cars and tourists and hawkers. Entry was free and so were the strict instructions. No staying back after dark as it is dangerous, no grazing animals, no damaging or defacing the artifacts and also the trees – courtesy ASI.

There was a Hanuman temple just at the entrance and… well, before that a little bit of the history of Bhangarh. 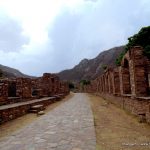 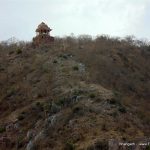 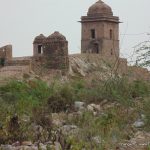 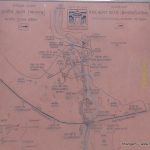 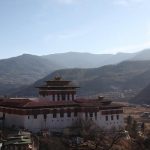 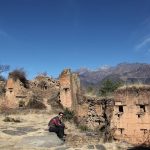 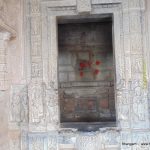 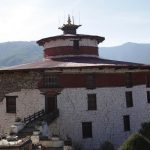 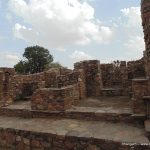 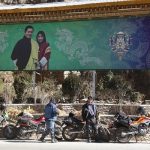 Factual history- Bhangarh fort was a township built in the sixteenth century by Bhagawant Singh for his son Madho Singh, who was the younger brother of the famous general Man Singh of Emperor Akbar’s court. It was a complete independent flourishing town with its own markets and places of entertainment and temples and a royal palace, with its usual fortifications, ramparts, tomb, mosque even and demarcations.

Hearsay – Sometime later, after a few generations, the town had come into utter destruction. How? Remains a mystery. Some say it was a battle while a few say it was a tempest or some similar natural destructive force that did it in one single day. A curse is attributed to the destruction and there are two versions which go about it. One is about a Babaji or Saadhu Bala Nath who had warned while constructing the city that the day the palace grounds shadow touches his dwelling will be the day the city goes to ruins, and a descendent not paying heed to the warning had raised the palace grounds a little higher inviting his curse. While the second is about Rani Ratnagiri who had invited the ire of a tantric when she had spurned his advances in a tragic manner and he had cursed the city in his dying moments. The next year Rani Ratnagiri had perished in the battle against Ajabgarh.

Now, coming back to the site, the sight that first met us was a complete surprise! We had expected to encounter a single fort in ruins which would seem eerie. But what lay in front of us lay a neat row of ruins. Yes neat was the word and the symmetry and planned manner of construction made it aesthetically attractive. The neat rows of the ruins of shops with its small rooms and houses truly transport you to another era and you wish to peep into those times and period.

The path was brick laid and the destruction was uniform. Only the roof and top half was gone. What was that force that had destroyed so uniformly and neatly while the rest remained intact and sturdy standing up to the test of time? By the hill side with formidable rocks jutting out of it was the royal palace and in front of it was the Gopinath temple. The lawn inside the inner court of the royal palace was lush green which was a complete contrast to the dry arid brownish terrain and buildings. A huge banyan tree with interesting root formation stood at the gates like a sentinel probably a witness to what had transpired long back…

We could not stay for long and explore the palace as the clouds were dark and it was beginning to drizzle.

Yes, it was not frightening or scary, but it had an air of mystery which is not surprising, because anything we are in the dark about is always mysterious. If we keep the paranormal factor out of it, and go simply by the site, I would say it was beautiful in its astounding symmetry and uniformity and also the contrast of colours it provided. The palace and the ramparts and intact temples- the testimonies to times of splendor stood proud like an aging beauty – graceful and strong!

I would highly recommend the place for a drive in, with its high adventure factor, the historical importance and the pure aesthetic beauty of the place. The locals we spoke to swore about it being haunted except for the Pujari at the Hanuman Mandir which added to the mystery quotient. Sometimes old wives tales make a better snack to go with your roadside cup of tea than mere biscuits and wafers, right?

A note – while going back to Delhi, I would recommend catching the Delhi Ajmer expressway at Manoharpur 50 kms away approx rather than driving back to Alwar. The road to Manoharpur is smooth and fast except for a small hiccup of around 500 metre or so at a point.