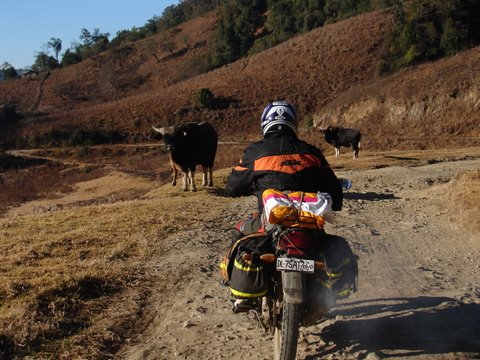 On a motorcycle travel through Nagaland, the author discovers that the backroads always passes through and leads to beautiful places.

This is the third time in as many visits that I have seen the old man and always at the same stone bench. But I never made any attempt to speak to him because I didn’t want to intrude. I guess he, like me, find the cemetery a peaceful place to spend some time alone and I find all the solitude I need at the World War II cemetery at Kohima, Nagaland. But I have been on the road for a while now, riding through a few states in North East India and making friends by the dozen….so I thought by now it is alright to intrude.

I walked up to say hello and as he turned towards me with a warm smile, I noticed for the first time a row of shiny War Medals pinned to his shawl. He had fought against the invading Japanese army in the bitter Kohima War and he was all of 19 years then.

The sun dipped over the mountain and the skies turned a fiery red as he told me stories of heroism, pain, death and glory. Wow! I thought, only a microscopic minority of my fellow travellers would have had the good luck to hear firsthand accounts from a War Hero.

My friend Anuj and I had reached Dimapur late evening and checked into a delightful home stay a little out of main town at a place called Padam Pukhuri. Dimapur is the commercial hub of the state and like any other business hub, is always crowded. There are a few watering holes too where you can let your hair down but we had a long day at the saddle and decided to give them a miss. There will be time enough for that.

We decided not to take the highway to Kohima and instead take a long detour. A little after the 7 Mile area, a road turns right towards Peren town. It’s a shortcut and the ride passes through an Assam Rifles camp, some new Sema and Angami villages, through gentle hilly stretches and on to the flat plane of Jalukie, which is sometimes called the ‘Ricebowl of Nagaland’. I have developed this sudden interest for caves and that explains my trip to Peren district. I was told that there were ancient caves with paintings inside beyond the village of Nsong. The road to Nsong was broken in large patches but the greenery and the fantastic view more than made up for the offroad conditions.

As advised, we pay a visit to the village Chairman but he had bad news for us. The road beyond the village was all dug up and closed. And it was a long trek to the caves. So we accepted the Chairman’s invite for a meal which his Lotha wife cooked…chicken with bamboo shoot, boiled vegetable and Raja Mirchi chutney that blew the roof of my mouth!! It is supposed to be the hottest chilli in the world.

Well, since Nsong was a failure, we decided on the other cave located at the border of Manipur or so I thought. It turned out that the caves were in Manipur. Well, it took us almost two days to ride to this border village named Ntuma and I am not going to go back without a trip to the cave.

The Barak river divides the two states and a wildly swinging suspension bridge is the only way of crossing it.  After a bone jarring six hour ride on a pickup truck and a three kilometre trek, we reached the Tharon Cave. We were told that there are 100 chambers in this cave and was used by freedom fighter Rani Gaidinliu during her fight against the British. It’s a labyrinth and one can easily get lost without a guide. The two and half hour tour was fun indeed and we were soaked and dirty thoroughly.

0nce more across the rickety bridge, we collected our bikes from the village and started for Peren town. But the mist started rolling in rather fast and we had to halt for the night at the PWD guest house at Tenning. The road from Ntuma to Tenning is well laid most of the way and hugs the edge of the cliff, offering stunning views of the mist covered blue mountains as far as the eye can see.

Tenning was just a stopover and early next morning we started out for the village of New Puilwa, 30 kms from Peren town.

It is not a village of any great significance but has lovely sights and sounds. The villagers have taken it up on themselves to protect the jungle in and around the village. They also plan to start a small wildlife sanctuary mainly for birds and small animals and with no govt help. For a village that has produced only one graduate person and no government officials, the people sure are very progressive.

A logging trail runs on one side of the village right down to the river for about four kilometres. We rode down and spent quite a few hours at the loggers’ camp with the elephants, their mahouts and other workers. They have a tough life but they still treated us to lunch with fish from the river. On the way up, we realised how steep the trail really was and the loose soil didn’t make things any easier. The villagers say that they will block this road off so as to stop logging. I say amen to that!

For once we stuck to our resolve of an early morning start and headed for Khonoma via the village of Beneru. Again, it is a total off-road. These roads are so devoid of traffic – both human and motor- that if you miss the turn off for the village, you would travel for miles before u find anyone to ask for direction. Most villagers are away working in the fields for the day.

After a quick look around Beneru, which has a lovely tourist lodge with an awesome view, we rode on to Khonoma via Dzulake village.  The bad roads pass through some wide meadows and rolling hills and every now and then we found solitary log cabins that where the shepherd stay to herd his goats. Perfect places to pitch your tent. These, and the roads at Puilwa and Ntuma are hidden trails that are way off the tourist maps but they lead to such wonderful places.

We reached Khonoma  just before sundown and checked into a warm home stay. There are no hotels in the village but the home stays run by a woman named Baby are very decent.

Khonoma is steeped in history. The villagers had fought some pitched battles with the invading British forces. There are forts in the village from where they held off the British. These forts looks rather flimsy today, but all those years back, with thick forests and steep hills all around, it must have been quite a stronghold. There’s an ancient 7 foot muzzle loading gun in perfect working condition and it was used against the British. Must have had some telling effect.

The villagers also helped the Allied army during the Battle for Kohima. The War Hero I mentioned at the onset also belongs to this village.

Khonoma has set an example for the rest of the state in terms of conservation – both flora and fauna, so much so that it has been named as a Green Village. No one is allowed to hunt in the village area nor fell trees without the permission of the village council. The birds have returned to the forests and they attract bird watchers from across the world.

Kohima and Khonoma are just 20 kilometres apart but there is a world of difference. From the easy pace of the village, the call of the birds, clean cobbled street and the wide open vista, we were transported to a big city and all its sights in an hour.

It was the day of the Sekrenyi festival celebrated by the Angami tribe. Kohima, being the headquarter of the Angamis, had a festive feel all around.

Sekrenyi is the festival of fertility and apart from the rituals that are observed in all the Angami villages, villagers gather at the Kohima football ground for a grand celebration. Lot of dances by the young and the old alike, music played by traditional instruments, women folks exchanging food stuffs and of course lots and lots of gunfire (my favourite part!)

But after travelling through the remote areas for a few days, the hectic life of Kohima got to me a little and I sought a little solitude at the War Cemetery.
And that’s where I met my War Hero. But I will save his stories for another day.

Chain Reaction – Adventure motorcycling and beyond…..

4 thoughts on “Through the Hidden Trails”