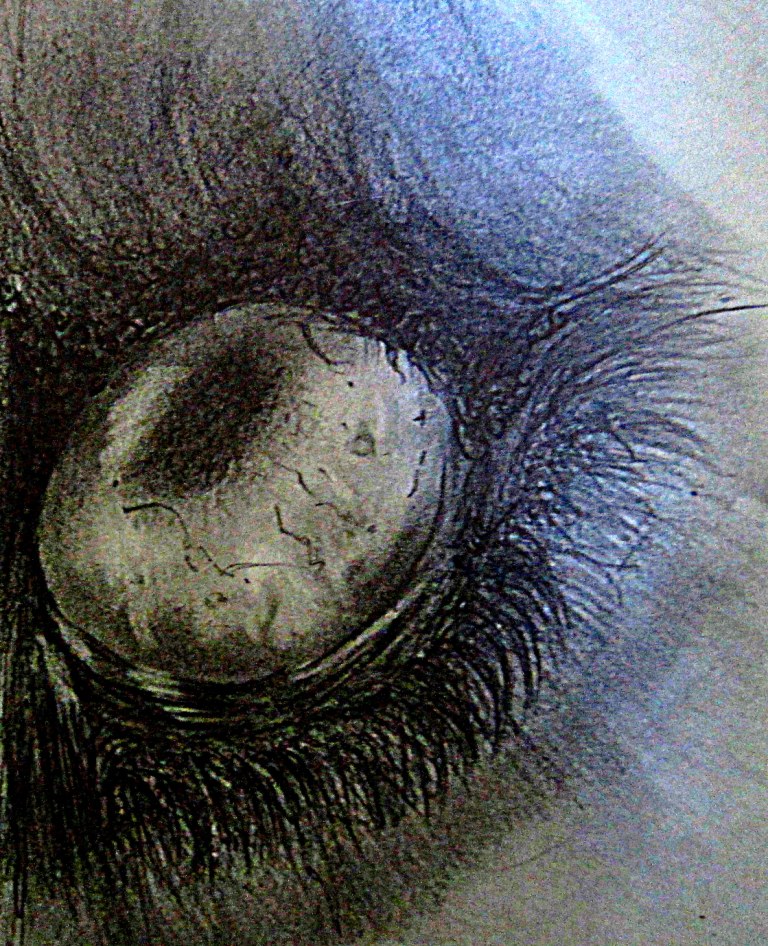 The Eyes of the Devil

The rains had come hard and thick that year in Dhubri district of Lower Assam. The great Bhramaputra was raging and the elders of the village said 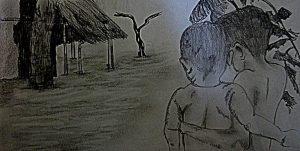 that they had never seen the river so angry.  The rain continued to fall and the depths of the mighty river could not hold the water any more. For days the river had threatened to spill over and when it ultimately did, the water came rapidly – driving humans and animals away from the villages and on to the higher land.

The water submerged vast swats of land. The paddy was lost and so were large numbers of livestock. The coming year would be tough, they said. Villagers, who had not occupied higher grounds in the small hillocks initially, found that these rapidly shrinking dry land could not hold any more people.

Since there were no other places to go, they all ended up on the tin roof of their Assam Type houses. Back in those days, movement of relief materials was not half as fast as they are today. With the Deputy Commissioner’s office also under water, communication was all but lost with the outside world and the people had very little to eat.

And still the rain continued and just when it seemed that if hunger didn’t get them, the water would, the rains stopped. The skies held and after a couple of days, the water began to recede. Slowly the roads surfaced but after that, it stopped and the water stayed in the fields.

The villagers slowly started to put their devastated life in order – cleaning and repairing their houses and all the while the water stayed in the fields.

And out of the water came a new evil.

It was silent, stealthy and nocturnal. The villagers feared it more than the floods. It was an animal that was driven in by the raging river. It was a man-eater who had a preference for kids.

Shanti used to work for my grandmother. She stayed in the outhouse and did the household chores while her husband worked at my granny’s fields. Like most traditional houses in rural Assam, the outhouse had pillars of bamboo while the walls were made of straw and plastered with mud. The flood washed away the mud and only the straw remained which had also become weak and brittle.

It was just after sundown. She had left her sleeping baby in the outhouse and was working in the kitchen.  But like all mothers in the world, Shanti also had great intuitive powers when it came to her children. Her heart was in the outhouse where she had left her baby. “Why not bring the baby into the kitchen itself?” she thought. It was a huge kitchen and she could make the baby sleep on the big box near the earthen stove. It would keep her warm too.

As she pushed open the bamboo door, she saw some movement at the far end of the room and the flickering tungsten light from the lantern brilliantly lit up two devilish eyes. 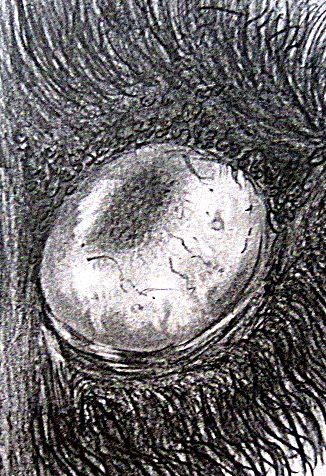 Shanti let out an earsplitting scream and ran towards the eyes because she could see baby near the eyes. But she was not fast enough and the animal with the devil’s eyes dragged the baby out through the hole it had made on the weak straw wall.

Her scream attracted my uncles and the other neighbors but the little time they took to organize a search proved to be fatal. Armed with spears, machetes, knives, sticks and fire torches, the men fanned out, leaving a hysterically crying Shanti behind. They didn’t have to go far at all. Very near to the house there were some shrubs and the men could see movements in them. The animal saw them coming and before anyone could get a good look or throw a spear at it, it melted away into the darkness.

They brought back home the partially devoured body of the baby and buried it the next day.

A couple of days later, Devil Eyes was at it again.  10 year old Zahida was taking a bath under the tubewell in their backyard by the side of the pond. Her mother came out to the varenda and called her but Zahida shouted back “5 more minutes!!” for the 3rd time. The cool water from the tubewell was inviting and she was having a great time beating the heat and the humidity and all the while singing at the top of her voice.

Her particularly shrill voice must have hurt the eardrums of her mother and she came out in a huff to drag her daughter home. And what she saw froze her blood.

A few feet behind an unsuspecting Zahida, Devil Eyes was getting ready to pounce. As her mother screamed, the creature dived into the water lily filled pond and was gone in a flash. Zahida stood rooted near the tubewell, trembling. She had turned and saw the animal at exactly the same time her mother had screamed.  She looked at those eyes for all of two seconds but they sent the shivers down her spine and years later she told me she still remembers those cold eyes.

In the next 15 days, two more little boys were lost and a dog too. And on each occasion, the villagers had seen the animal. When my uncle Arafat, who hunted rather frequently, asked them to describe the animal, they came up with strange descriptions. Some said it was a hyena, while others said it had a furry skin and could stand on its hind legs and also swim underwater for long distance.

The descriptions ruled out a hyena as it never stands on its hind legs and neither does it swim under water.

Well, whatever it was, the Devil Eyes had to be shut for good and the onus fell on Uncle Arafat. He started looking for pug marks and having found them, started tracking it. Even though the creature operated over a pretty large submerged area, it followed a certain pattern of movement. Uncle found that it frequently emerged out of the water and used a path through dense undergrowth which led directly to an abandoned house. “This is where I will wait” thought Uncle Arafat.

After sundown, Uncle positioned himself on the roof of the abandoned house. There was a huge mango tree that grew over the house like a canopy and completely camouflaged him from the road.

As the sun went down, gloom and fear descended on the village like a cloak. No one ventured outside their house and the village wore a deserted look.

The only person out was Uncle. As the eastern light gave way to darkness, he made his way to the tin roof of the abandoned house. He sat with his back against a thick branch of the mango tree and watched the path ahead from where, he knew, the creature would emerge. He also knew from experience that it would not show itself in a hurry. So he waited. He had the patience of a vulture as he sat silently and motionless for hours together with his Winchester Repeater rifle across his lap, loaded with eight long range shots.

The crickets began their chorus and a million stars bejeweled the sky along with the almost full moon as the rain laden clouds drifted by, but Devil Eyes did not show himself. After three long uncomfortable nights on the tin roof, the devil surfaced and at the exact place where uncle believed it would.

The still night was no different than the previous ones. But as he watched the path, he saw one big cluster of water hyacinth near the bank move while the others remained still.  The old hunting instinct kicked in and he watched the cluster intently, gun at the ready. The bank was shadowed but slowly a shadow within the shadow moved and took shape.

The creature emerged from the water, shook the water off and stood on its hind legs. Initially the shadow had seemed small but on its hind legs, it certainly gained huge and scary proportions. It stood looking and sniffing for a long time but all the while remained in the shadow. Uncle had the gun trained at it but the shadow did not allow a clean view and since the moon was obscured by dark clouds, it compounded matters.

Just as Devil Eyes started to move towards the undergrowth, the clouds drifted and the moon shone in all its brilliance exposing the killer. Uncle let go two very quick shots and the reports almost sounded like one. The first shot clipped the tail and the second hit it on the right leg. It growled in anger and pain and dashed away towards the rushing river which had much less foliage. 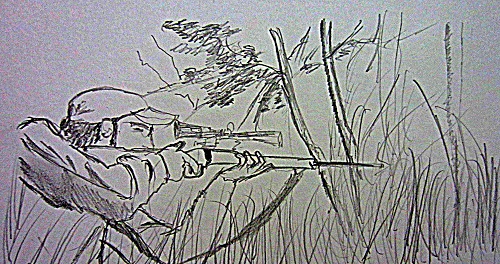 Granny and the rest of the people in her house heard the gun report and the blood chilling growls that followed. She said a silent prayer for her son.

Uncle knew that the shots were not clean and instantly slid down a beetle nut tree and ran after it. It left a thick trail of blood which said that it was injured bad.  Previous encounters had taught uncle that an injured animal was extremely dangerous and so he approached the blood trail with great caution.

By now the clouds all drifted away and the land was awash with moonlight. The blood trail led to a bushy area right at the bank of the river which seemed outright dangerous.

The killer was in the bush for certain but where exactly? So he waited for it to make the first move and it did. Uncle saw the deadly cold eyes much before the killer jumped at him. The moonlight shone on the eyes, lighting them up brilliantly like the eyes of all animals. And those brilliant eyes were its outdoing. 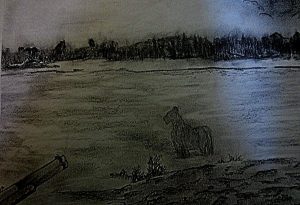 the middle . The impact of the bullets stopped it right in its track, not far from where uncle stood. It staggered a little, looked one last time with hate filled eyes at my uncle and fell into the river which swept it away.

Uncle never had a clear look at it to ascertain what animal it was and the rushing river made sure no one ever found out.

The eyes sure belonged to the devil. My uncle is a very old man now with fading memories but he remembers those eyes like yesterday. The eyes that spoke death.

The eyes of the devil indeed.

Riding to a Time Warp- Sariska