Riding to a Time Warp- Sariska

Most people take a bike for a trip to places that are pleasing but bikers are often nuts to attempt journeys over bad roads and in freezing cold provided the destination is exciting enough. So when I heard of a hidden valley with ancient temples and abandoned forts in the middle of the Sariska game sanctuary, it was all the temptation I needed. A car would have been more comfortable but motorcycle journeys have a certain romance that far outweighs all the negative points. Dust in the face, dirt in the legs, getting wet to the bones and bugs that goes under your collar are all the tangible joys of motorcycling. And if you go off the beaten track a bike can get you to places that no other vehicle can reach.

There are innumerable weekend getaways around Delhi and if you have a young heart and a shoestring budget, than the motorcycle is the best way to travel. So I decided to take a weekend trip to Alwar and Sariska in Rajasthan. And what better bike than a Royal Enfield Bullet for a solid and comfortable ride especially with the thought that everyone makes way for an Electra.

My photographer friend Anuj and I wanted to start out early on a Friday morning but thick fog delayed us by quite a few hours. But it was good going once we hit the excellent National Highway number 8. We reached Dharuhera, a distance of 57 kilometres from Delhi in an hour and half. Then turning left from Dharuhera we hit the state highway that leads to Alwar. Since the Bullet Electra that we were riding was a brand new one, we had to ride rather slowly for the 85 kms needed, to get to Alwar where we spent the night. On the way to Alwar, just after Kishangarh, there are a number of bee keepers. From a distance the carefully placed bee boxes look just like graves in a cemetery. 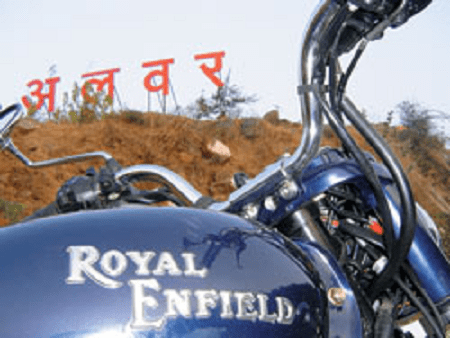 Early next morning the fog was much thinner and we started out to check out the sights of Alwar. The city palace with the attractive marble Sita Ram temple, supposed to commemorate the sati of one of the Alwar queens was very picturesque and interesting.

It overlooks what was once a magnificent tank with palaces all around. The palace is unfortunately in a scruffy state now having become infested by hundreds of Government offices but it does contain an interesting museum with a fine collection of Rajput and Mughal paintings, rare manuscripts and a good collection of ancient arms and armour.

The palace and tank looks up at a steep escarpment lined with battlements rising through the dry rocky hills to a small but picturesque fort at the top. This fort was built about 1000 years ago and was conquered by Balban in the 13th century. It later came under the rulers of Jaipur. It is about 8 kms from the palace and is easily reached by an excellent winding road that is just perfect for motorcyclists who enjoy sharp banking. The thrill of speed is not in speed itself but in the feel of roaring up slopes and bends.

Just out of Alwar and off the road going to Jaipur, is the Siliserh Lake, which used to be a shooting lodge for the erstwhile rulers. Tigers were shot in the area till quite recently. The small palace is on a hill overlooking a big lake where boating is an added attraction. Here one can hire a boat for Rs 50 for half an hour. An artificial island in the lake used to be the scene of many festivities in times past. 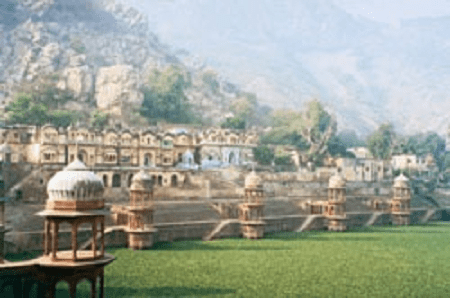 The Rajasthan Government now runs a 12-room hotel at this site and the rents starts from Rs 500 onwards and goes on to Rs 2200 a night for a double room. An ancient aqua duct built by Maharaja Jai Singh runs almost parallel to the road for several kilometres and it still carries water.

On the left of the road, 3 kms before Sariska are a cluster of temples and tanks at a place called Bharatrihari where the legendary Vikramaditya is believed to have meditated. There are a huge number of monkeys ambling around and looking extremely well fed too. The number of bells festooned on the temple indicated that many worshippers had their wishes fulfilled. 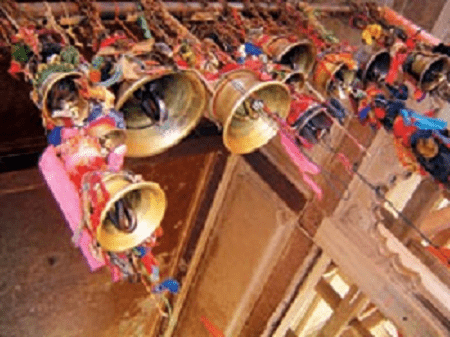 40 kms from Alwar is the Sariska game sanctuary spread over nearly 800 sq. kms. It is a scrubby jungle between the Aravalli hills and is reported to contain about 28 tigers. For such a large area the population of tigers is pretty low. No wonder these magnificent animals are infrequently seen. Two tigress were recently run over by some thoughtless driver. But an abundance of other kinds of wildlife can be seen. Chital, sambhar, neelgai, wild boar, jackal, wolf, hyenas and the occasional leopard. Needless to say, there are hundreds of species of birds, both domestic and migratory and are a treat for the bird watchers.

Motorcycles are allowed inside the Sariska sanctuary only on Saturdays and Tuesdays and luckily it was a Saturday so we were allowed to enter. Inside the sanctuary, we first took the left fork of the metalled road that took us to Pandavpol where there is a large rock outcrop where the Pandavas are believed to have stayed for a part of their exile. We saw plenty of game, mostly the herbivorous ones but there was no sign of Mr. Stripes or Mr. Spots. But I guess we were lucky, being on a bike might have ended with us as pot luck for them.

Other than the wild animals the sanctuary will interest those who love history. Very few people know that there is an amazing hidden valley inside the sanctuary that is in a virtual time warp of history. This valley is surrounded by a 400-foot escarpment of rough Aravalli hills and is roughly 12 kms long and three kms wide. You can enter the valley through two well-concealed old fortified Mughal gates. But when you enter the valley you feel that you have gone back a thousand years. 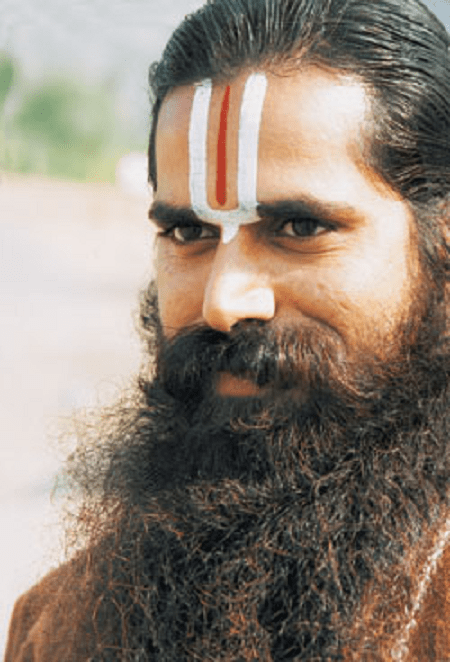 To get to it we travelled to Tehla about 35 kms away from Sariska and just outside the sanctuary. From there, the road climbs in a series of sharp bends, which the Electra tackled beautifully, and up an escarpment to reach the fortified entrance of the valley. Barely a kilometre from the entrance are the ruins of Neelkanteshwar where one Shiv temple and many other Hindu, Gurjara Pratihara and Jain temples dating from the 8th to 12th centuries lie scattered forlornly among the rocks and trees. These include a magnificent 18-foot high statue of Mahavira. Sometimes it gives you an eerie feeling because of the stillness. There are no signs of any human habitation.

All these temples must have had a large population to patronize them but little trace of such habitation now survives. It is possible that until the Jaipur area developed, Neelkanteshwar might have been a safe sanctuary on an ancient trading route between the northern plains and the Chambal river region. We then rode over some ten kilometres of very rough road to get to the sad ruins of a fort on a tall hill rising abruptly from the plain over a little lake. This was Kanakapara where the unfortunate prince Dara Shikoh was once imprisoned by his brother Emperor Aurangzeb. It is a rough and backward area with a mysterious aura and tantalising hints of the Mahabharata, Buddhist, Jain, Rajput and Mughal periods.

It was a bit scary as we scrambled over tangled shrubs and broken masonry climbing about 200 feet to the top of the fort. We made as much noise as possible in the hope of frightening away any wild animals that might be lurking in the shadows.

Right at the top was a wrecked but magnificent room still adorned with pretty blue tiles with a fantastic view of the lake below. A lake surrounded by tall palm trees that were, no doubt, the result of date seeds discarded by Mughal soldiers. It was easy to imagine the last months of this proud scholar prince sadly reflecting on his dreams and follies in this serene but solitary setting. 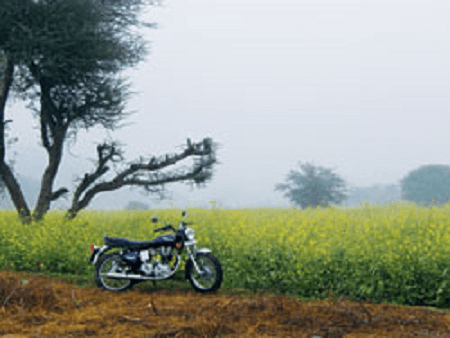 Reaching Neelkanteshwar by a bike from the south-east was comfortable but the other road from the northern side is not that easy. It calls for a tough bike and an equally good biker. There are no roads but only deeply rutted dirt tracks meandering over rocky outcrops and traversing seasonal streams. These are the kinds of roads that the Bullet tackles with aplomb. It is a very backward area with most primitive agriculture. In December all it had to show were a few patches of brilliant yellow mustard but mostly bajra and other coarse grain. The few inhabitants of the half dozen small villages are mostly Meena tribals with a sprinkling of Gujjar nomads who graze their buffaloes in the forest. But they sometimes end up as dinners for the tigers. On the way back we rode over a bone shaker of a track and blessed the Electra’s gas filled rear shockers. We then came out through another fortified gate meeting the road we had earlier travelled down but much closer to Sariska. 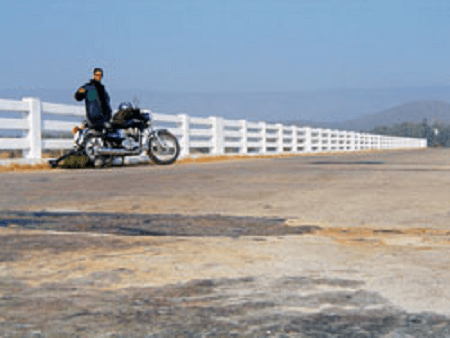 For a night halt or two, the two Rajasthan Government hotels at Siliserh and Sariska are rather rudimentary and will need food supplements. There is a better but more expensive 70 room private Palace Hotel at Sariska but the best place to stay is the 21 room Hill Fort Kesroli about 8 kms from Alwar on the road towards Sohna. This is a heritage hotel set up by Neemrana Hotels in an old seven turreted fort. It has been most tastefully decorated and has excellent modern conveniences. With tariffs between Rs. 1500 and Rs 3000 it is not too expensive as well. We took the same route back to Delhi early Monday morning and arrived there in six leisurely hours. Riding early morning in this time of the year with the thick fog is not very safe and it is better to wait for the sun to shine through.

So the Alwar region has a lot to offer to those who want to travel the soft way as well as for those capable of roughing it out. But if you go to Neelkanteshwar it will take you to another world. ‘

The Eyes of the Devil