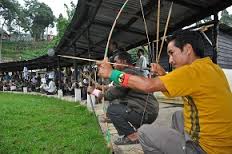 As you walk down the streets of Shillong, you would see a lot of small outlets, most with someone sitting with a pen and a set of plain sheets with small squares drawn with the help of a ruler. There is board behind him/her where there are two slots for writing numbers – titled 1st round and 2nd round respectively. These outlets which are actually kiosks are so small so as to adjust just a table and a chair and most of the times you will see that these outlets are open air, a kong sitting with a mura and a small table where she also sells kwai. If you watch for some more time observing any of these outlets, you would see people coming in and telling a number. The person sitting in the counter writes the number and the date in one of the squares, tears it and gives it to the other person. These small tickets are nothing but lottery tickets what is popularly known as teer and it can be bought with as low as one rupee.

During college, I followed the sport closely but never placed a bet myself due to the ‘gambling’ tag attached to it. However, what attracted me most is the interpretation of dreams that could lead to winning in teer. Yes, you heard it right! Dreams! There is myth that goes about the sport that you can forecast the numbers if you de-crypt the dreams you saw the previous night. So the whole business which is estimated to be worth 700-800 crores is dependent on the interpretation of dreams.

Gambling through teer (archery) has been there since over hundred years, when some clubs started holding weekly contests. The sport however took its present form in the 1950s and officially when it was legalized by the state government in 1982. The sport is controlled by Khasi Hills Archery Sport Institue (KHASI) and 12 clubs are affiliated to them where they are allotted turns to shoot on the ground. The shooting is held in a corner of the Polo Grounds in Shillong. Two clubs get their turn every day from Monday to Friday, and on Saturday archers of all the clubs get to shoot. The shooting starts in the late afternoon and there are two rounds held every day. The number of arrows allotted to the archers for the two rounds—1,800 and 1,200 respectively on weekdays and 1,980 and 1,320 respectively on Saturdays. Archers of different clubs have differently colored arrows and they shoot together. The club that gets maximum number of arrows in the target is the winner club. Well that was the ‘archery part’ of the story. What about the lottery?

After each round of shooting, the number of arrows hitting the target is counted. If the number of arrows hitting the target is 1,324 then the winning digits of that round would be 24. Gamblers would forecast the winning digits for each round and place their bets. Bets are registered on single or double-digit numbers. Re 1 placed on a winning single number yields Rs 80 in the first round and Rs 70 in the second round of the game. If a gambler buys 1 rupee tickets for both the rounds, and forecasts the exact winning numbers of both the numbers, he can win Rs. 4,444.

Teer and the Dream myths

The gamblers would often be found asking about the dreams their friends might have had and would be trying to decrypt it. Sometimes they even use fortune telling skills to decrypt the dreams. A neighbor of mine who was a keen gambler and knew astrology was known to predict the numbers through astrology and would often win.  I remember as a kid I once saw a dream that I was near a dustbin where there only old wallets being dumped. I picked up one of the wallets and found Rs. 10 in it. It was a strange dream and I told it to my father and he just mentioned it to a colleague in his office in jest. That colleague in turn went and placed a bet on the number 10 and he won in one of the rounds that day. After that my father would be asked daily if I had seen any more of such dreams which was utterly irritating to say the least.

There are close to 1500 legal counters in Meghalaya and innumerable illegal counters throughout Northeast and North Bengal. It is a huge industry and Meghalaya Government is earning between 100-200 lakh rupees of revenue annually. Meghalaya government is also trying to cash this craze of teer globally by taking this game online.

However, even though teer has gained in popularity in Meghalaya, it is still looked down upon due to the gambling associated with it. The elite and respectable families still don’t take part in it. It is only the families which come under the strata of economically weak section who are under the clutches of this social evil. Men of these families turn to this to earn a quick buck with a small amount of investment. However, it has been seen that only a small percent of regular gamblers win. Another social evil comes to get associated with this. That is drinking. If the gamblers win, they spend it drinking. If they lose then also they drink hoping for a better dream next day.

There is another aspect of the game which can ruin the bookies. As the payment to the winners are to be made in cash on the same day, sometimes the bookies can go bankrupt if the winning amount is more than the collections that day. This often happens with smaller bookies who often take loans at hefty interest rates to pay the winners which sometimes can never be paid.

The sport may be an evil, but this is surely one of the traditions laced with myths in the land of numerous myths regarding black magic and supernatural powers.