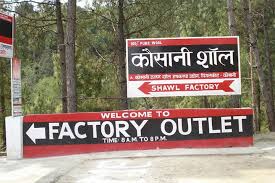 There is a story in each of us. A story lurks at every turn or corner of a road. Every house, be it grand or nondescript has a story of their own… This is something I believe fervently. And this is what I try to see and seek in each of my travels. The story maybe a story of a person or a place or an initiative that becomes the livelihood to many…anything that catches my fancy as in today’s case – the story of the lovely shawl or stole that you have draped around you so lovingly and that which is so becoming of you. Weird choice of a story , you think? Well , lets see.

While on a trip to Kausani , in Uttaranchal I was directed as a part of sight seeing and souvenir shopping to the Kausani Shawl factory. As the word factory suggests, I expected a huge building with smoke chimneys, though of course how a chimney fits a shawl factory I have no idea, still I could not escape the stereotyped train of thoughts. However what I saw was surprisingly a shop that had in its display some beautiful, shawls , stoles and other handloom products. But where was the factory ? The shop keeper then proceeded to take us on a tour of the small factory which was a means to fulfilling bigger dreams of the people there.

It is a bitter irony how life can be pretty harsh at a pretty place like in the mountains, Water is a major problem inspite of the gargling springs , transport and communications is another major problem. And without those two major support , the infrastructure takes a major beating. So we do have our pristine Himalayan village to admire and ogle at but of course at what cost! While we leave our polluted cities for a vacation to the lovely mountains, the locals have to migrate from their beautiful villages in search of livelihood to the cities. Which does sound quite unfair!

So desperate situations require an united approach , and one of those was the revival of the small scale industry at a more united level as cooperative societies.

Kausani Shawl factory was one such where the local artisans and weavers were provided a chance to earn an income as well as keep the traditional weaving art form alive by such an initiative.

So where did the beautiful shawl come from? How was it born? What was its story? 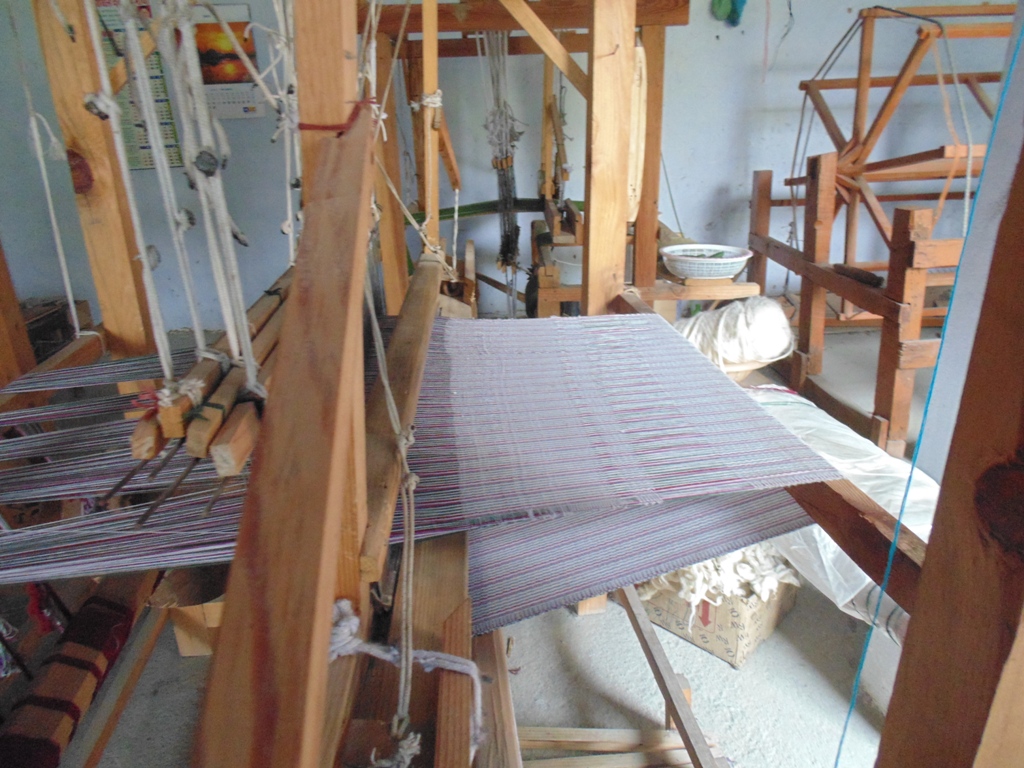 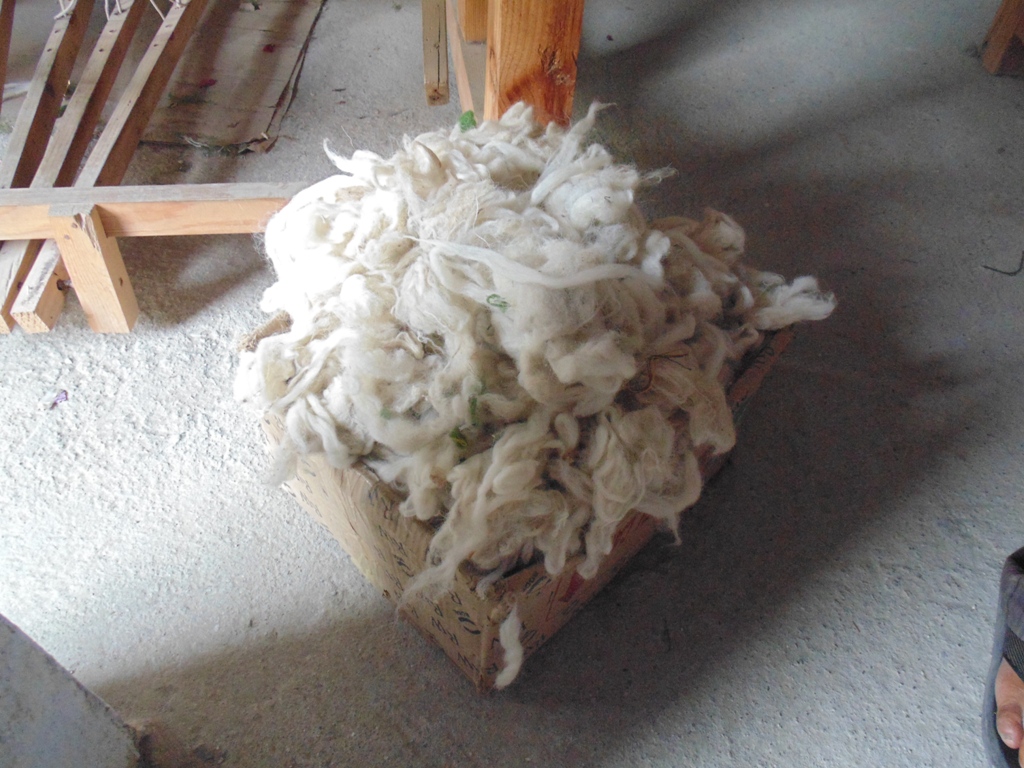 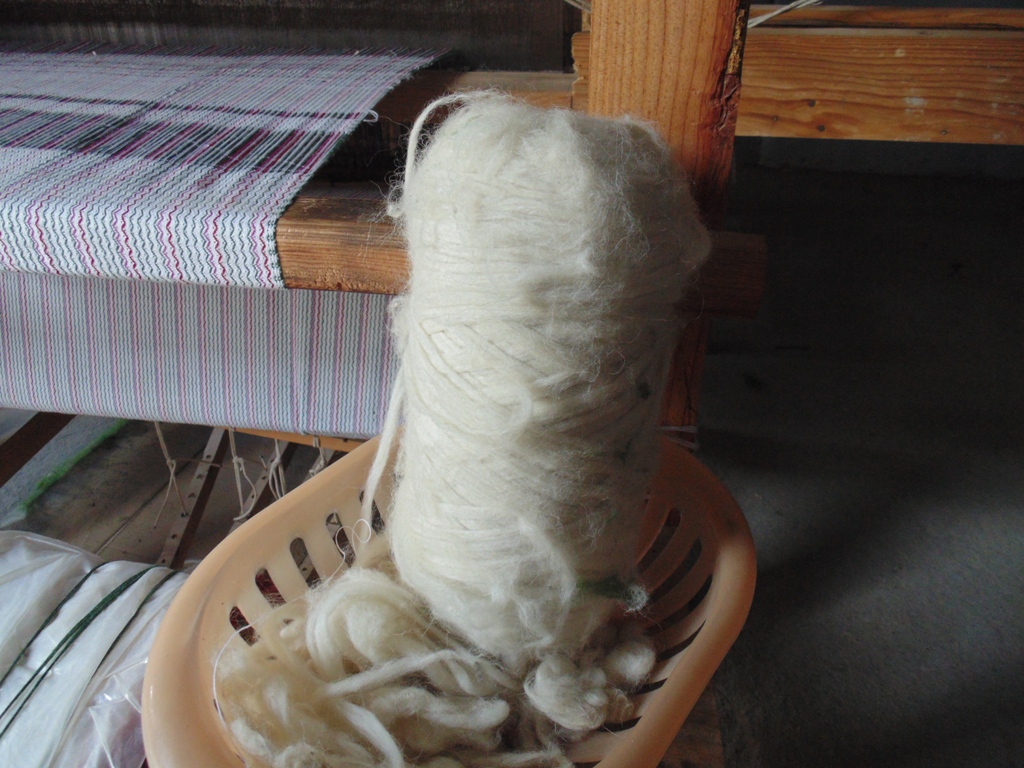 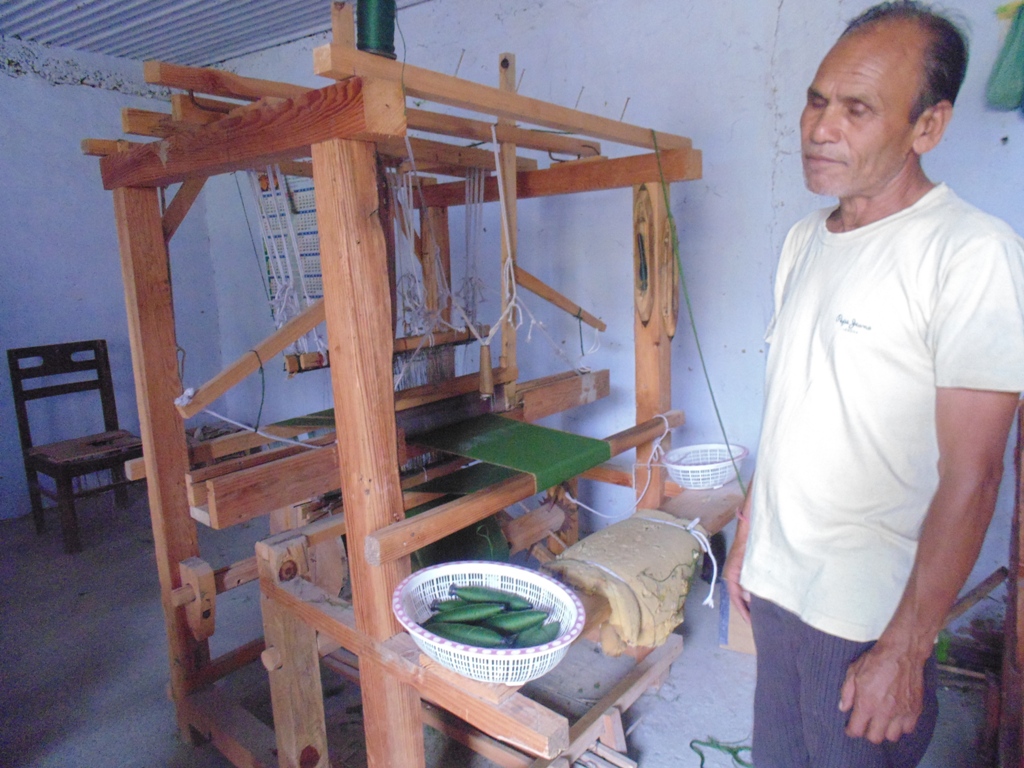 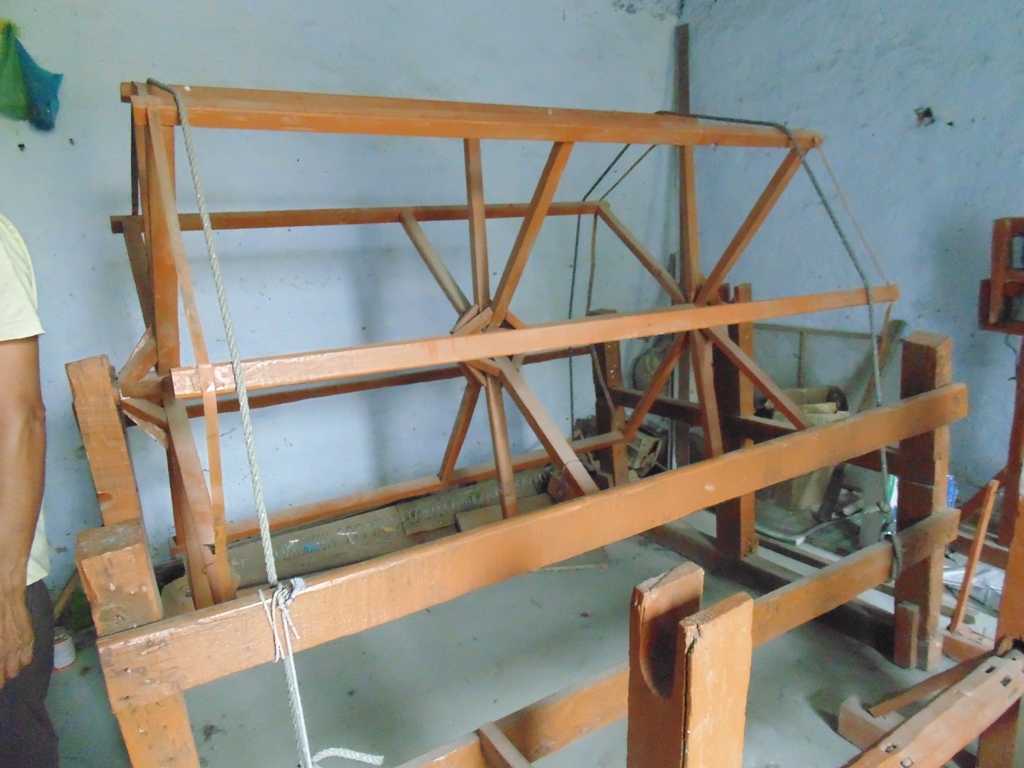 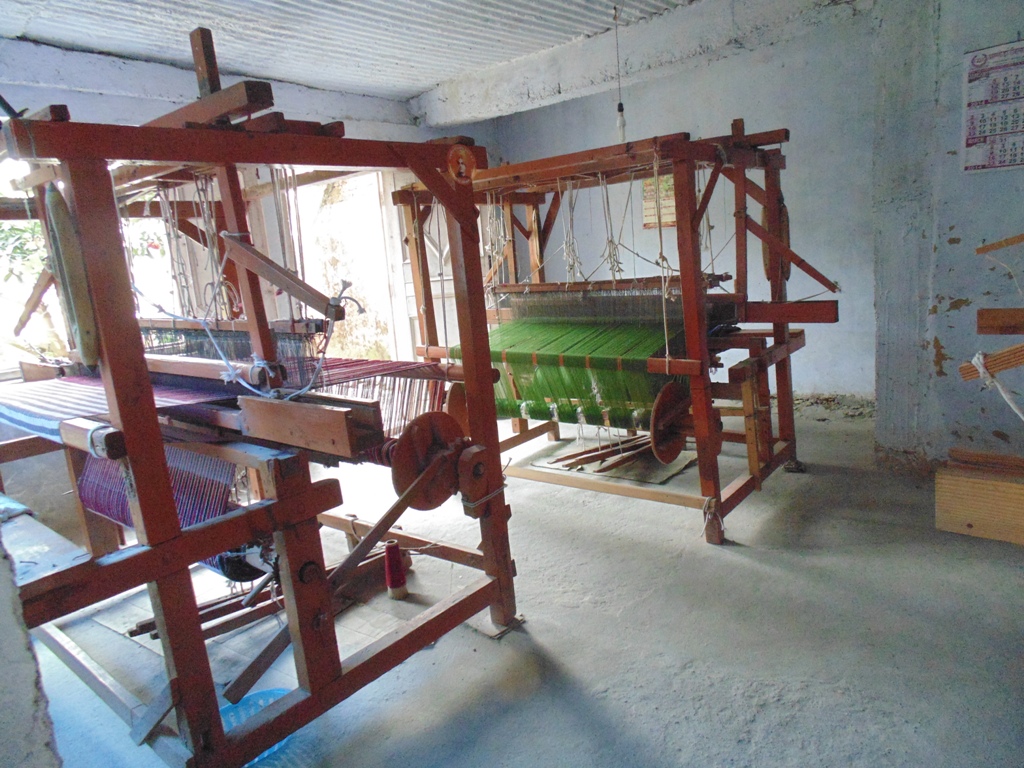 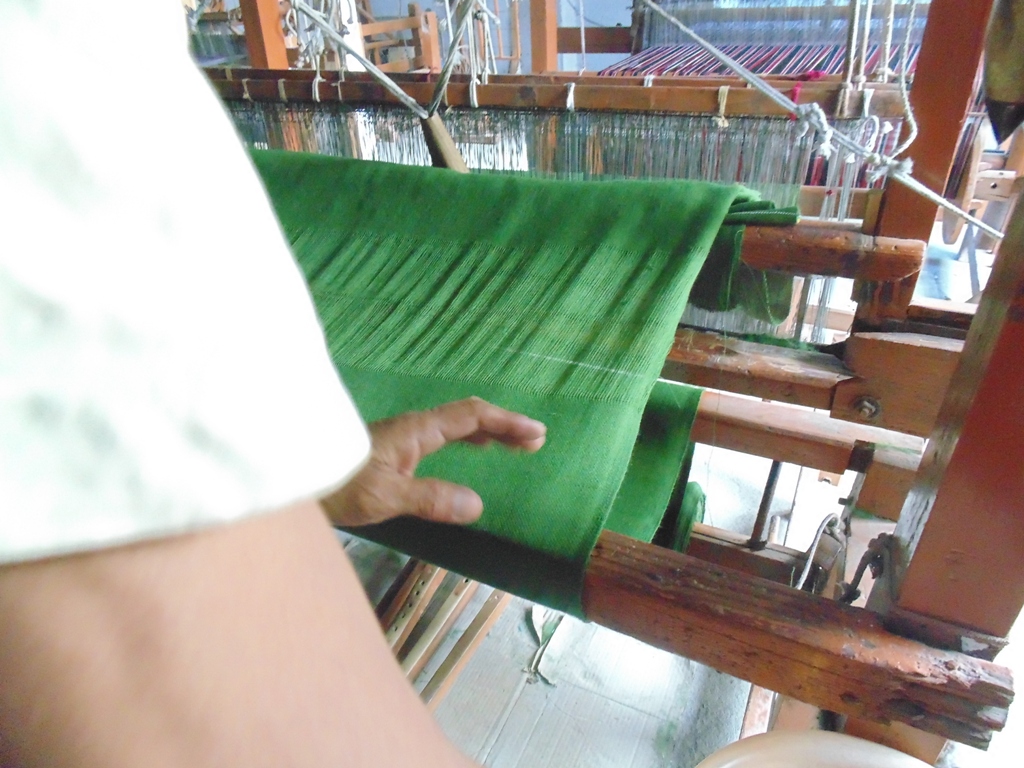 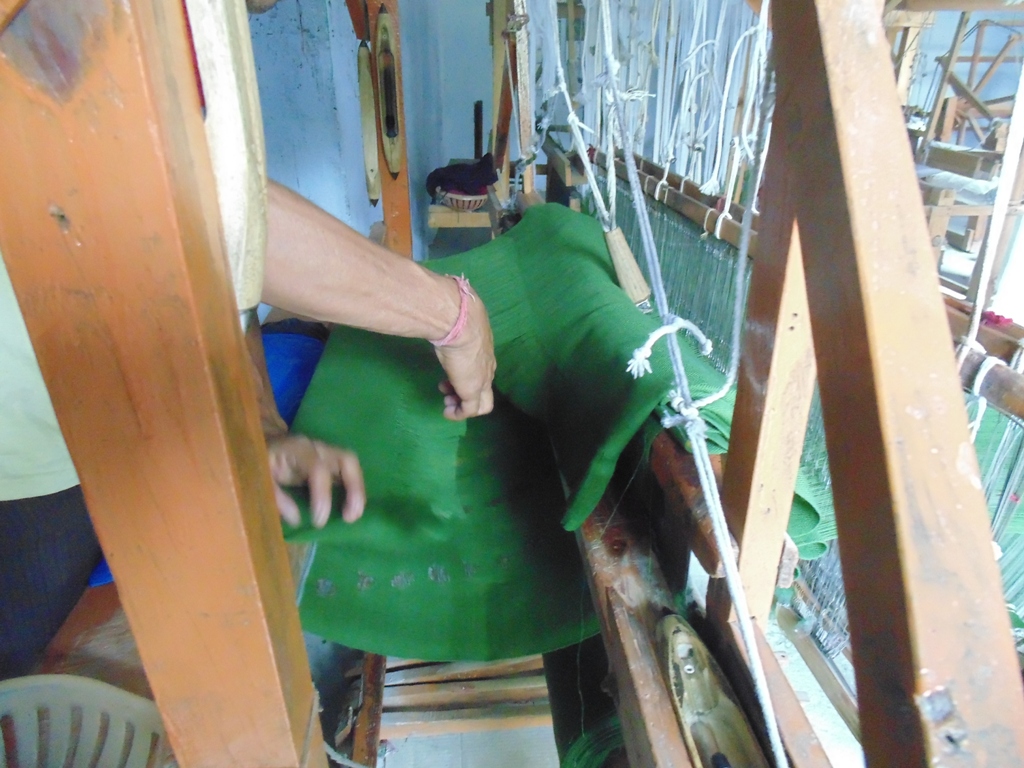 The shop tender took us to the back of the shop , down a hilly path to the factory which was a small shed like room which housed six looms a spindle and other wares. He quickly added there was a bigger one at the village and they had a couple of power looms which ran on electricity.

My gaze fell upon a few bales which the worker confirmed as sheep wool. The sheep were sheared in the village and which was then spun into wool.

The basic principle was almost same as that of a cotton loom and spinning yarn except that here the raw material was the wool and the weave and the fine designed differentiated the categories of the products which was as a whole handwoven.

He told us that the handlooms could weave around three to four stoles per day while a proper full length shawl took a whole day. That particular unit employed around 25 persons in total including the sheep wool provider, and the other craftsmen. And there were more such units down at the village.

So as a whole the initiative provided employment to near about hundred persons and which did not require much elaborate arrangement nor space.

Initially the funding was from the government on a low interest loan, but now they were quite self sufficient and doing well with plans of expanding further in the interiors, which was a good news as that meant more employment.

Such shawls and stoles were quite a hit with the tourists for their quality, uniqueness and designs. Since they retailed at their own outlet , the middlemen system was completely by passed and maximum profits went to the wavers themselves. They had retail units in Ranikhet too and as I said more were coming forth in the future. They sold in a range from two hundred bucks to thousands depending upon the design and weave of the material.

It was inspiring to see how a little piece of cloth was actually a dream built upon the sweat of hundred others. So next time when you are buying a souvenir or something for yourself, please refrain yourself from haggling for a few rupees. We don’t raise an eyebrow when we are buying diesel or a Calvin Klein just because they are brands. Well then in these case you are endorsing a brand which is a long running tradition and dreams of yonder hamlet in the beautiful mountains. Can the designer brands compete with that? I don’t think so.

A trip to the pyramids of Egypt