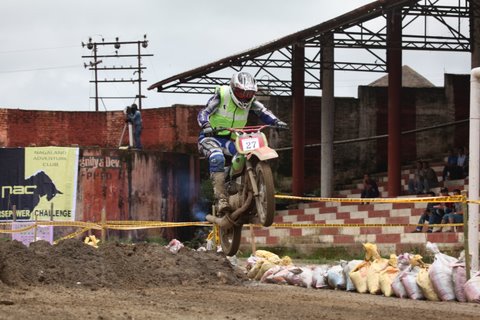 The 2nd Horsepower Challenge Autocross organised by the Nagaland Adventure Club at the Kohima football ground, in Nagaland was a tough affair. And the torrential rain on all the three days of competition didn’t make things any easier for the competitors. For an event that is only in its second year, it has managed to attract quite a few well known names from the motorsports fraternity – in both the four and two wheeler category – drivers like Sandeep Sharma, Atikur Rahman and Hatpa Wangnao and Rehan Khan and Shujaad Khan in the two wheeler section. There were as many as 68 entries in the four wheeler section across categories like above 1000cc, upto 1000cc and SUVs. While the two wheeler section had an open class which saw 19 entries with riders coming in from Assam, Meghalaya, Delhi, Bhopal, Dheradun beside the local riders. It was a three day affair – the first day was for the motorcycles; 4-wheelers competed on the second day and on the third day the finals for both the 2 and 4-wheelers were held.

Since there were 68 participants in the 4-wheeler category, the organisers did away with the qualifying rounds. Each driver were given 3 laps and the ones with the best timings from each group made it to the finals. The Nagaland Adventure Club also had a class for the local riders which saw 6 entries that also drew the loudest cheer from the crowd.

The 2-wheeler event was much more exciting with some very close races. The rain and the slush took a heavy toll on the bikes with a lot of DNFs. But the slush also added a lot of drama to the races.

In spite of the nonstop rain, the event drew large crowds and the finals saw a jam-packed stadium. The two wheeler event drew the loudest cheers for all the thrills and spills.

Paranormal tourism and the North East

A Gun For Robinson Crusoe- The story continues…