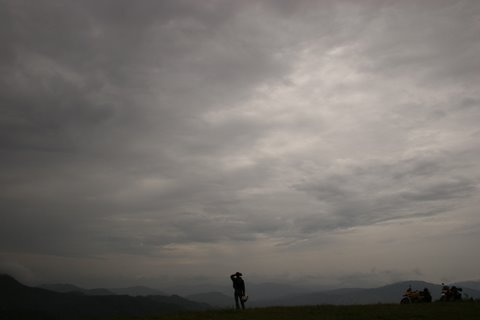 A Gun For Robinson Crusoe- The story continues…

This the second part of Shahwar Hussain’s motorcycle travel through North East India. “It is going to rain early this year” said Lehlu, a farmer who sells vegetables at the Kohima market. I looked towards the sky and there was not a whiff of cloud on it…clear blue sky. And I forgot about it altogether.

I was leading a few friends on a motorcycle tour of North East India and after spending a few days of riding in and around Kohima, we decide to ride out towards Wokha, Mokokchung and Mon. It was late March and winter was on its way out, but there was a rather strong sting in the early morning Kohima wind as it came whistling down from the Japfu peak. We stepped into Dream Cafe, near the War Cemetery, for a late breakfast and for a moment I thought we were somewhere in South Korea! Korean TV series are a rage here in Nagaland and there were two tables occupied with a bunch of young people who looked like actors from those TV series. Since we sat near their tables, I overheard them talking and realised that they certainly were not talking in Nagamese and none of the other Naga dilects. The waitress later enlightened me to the fact the young people were speaking Korean!!

After bidding  goodbye to our ‘Korean’ friends, we hit the road for Wokha, the headquarters of the Lotha tribe. Wokha is just 80 odd kms away from Kohima and the roads were generally good except for some rough stretches especially in the Tseminyu area. It looked as if the overhanging rocks would fall anytime. And they do fall frequently during the monsoon season. We made it to Longsa village in Wokha late in the evening when everything was awash with the golden rays of the setting sun. Ofcourse it called for a photo session but later when we viewed the pictures, they simply did not do justice to the fabulous setting. The picture that I have in my mind’s eye is better.

The reason why we stopped at Longsa village was because my friend’s house was a much better place to spend the night than the Government tourist lodge….and the kitchen does not close at 9.30pm!

In the morning our group went around the village and Anuj went with the women folk down to a water hole. Winters are hard time for the villagers in the mountain due to scarcity of water and they have to go miles to get potable water on their baskets. Back breaking work indeed! Anuj found out the hard way that a big man (which he is) cannot necessarily carry more water up the steep inclines….one has to know how to climb without spilling the water. By the time he reached the house, he had spilled most of the water…and if that was not embarrassment enough, he found even the little ones making fun of him.

Since the day’s ride was for only 40 kms, we started out only after lunch and headed for the Doyang reservoir. Doyang is a hydro electricity project and the dam across the Doyang river has flooded an area of more than 8000 hectares. There are small islands all over the reservoir and the local fishermen have made their huts on these. One such fisherman named Andrew had invited us to stay over the night in his ‘hut’.

We reached the hut after a 45 minutes boat ride through stretches where dead trees stuck out of the water. It was rather eerie and the after dark, it felt downright creepy. Along the way, Andrew pulled up a 5 kilo fish from the net which he had laid in the morning and also shot a crane with a .22 rifle. Food enough for dinner.

Later in the night, I lay outside my tent with a million stars above and the only sound I heard was the soft lapping of the water against the two country boats and the shore. It was a peaceful easy feeling and if I had been on my own, I sure would have stayed put for another couple of days…

Breakfast consisted of large mugs of tea, eggs and meat of a common jungle fowl. Unusual breakfast for most of the guys but it was filling.

Next destination was Mon, home of the Konyak tribe, and to reach there, we had to travel through Assam. Along the way we passed through the villages of Sanis, Baghty, Bhandari, Merapani and on to towns in Assam like Golaghat, the tea town of Jorhat and finally reached Sibsagar, which was the capital of Assam during the Ahom rule.

As we rolled out from our hotel the next day to travel to Mon, I realised that the prediction of the vegetable seller at the Kohima market would come true. At Sonari, we crossed a very old iron bridge and right after it is the Nagaland Police check post. We produced our Inner Line Permit and after the formalities, we rode on.

The skies had promised rain all day long and at midday, the heavens opened up in true earnest. And that too as soon as we hit the hills. But thankfully, the rains did not last very long that day. It is just 45 kms to Mon town from the checkpoint but it took all of 2 hours to travel the distance. That stretch of road was being constructed and there was too much of rubble and mud on the way. And the rains made the surface so slippery that at certain downhill stretches, it was outright dangerous. We rode for another 42 kms from Mon town to a village called Lungwa. This village straddles the international border between India and Myanmar and it seems to have been caught in a time warp. Almost all the houses in the village, except the three schools and the church, are built in the traditional manner – with bamboo, wood and leaf for the roof. And these thatched houses are huge too! As we sat inside the Angh’s (village chief) house, I realised that a two bedroom flat would very easily fit into the common room!  And he said that he had to make the house smaller this year because of time constrains!! The Konyaks were the most feared headhunting warriors in all of Nagaland. And they hunted heads in living memory. As we moved around the village, we saw a lot of tattooed old people. They were warriors from a bygone era. For a Konyak warrior, getting a face tattoo was the ultimate honour. Any warrior who went into warfare was decorated with a ‘V’ shaped tattoo in his body. But if a warrior brings back the head of an enemy from the battle, he was decorated with tattoos in his face. The more heads he collected, the more intricate the tattoos grew as did his status. The tattoos were done by the Queen of the village. Almost all the villages had their own collection of human skulls-trophies from battles fought in another era. The advent of Christianity has resulted in most of these collections being buried,except for some villages like Chenga Shengue which has built a museum to house the skulls and other artefacts from that era. The Konyaks are ruled by Anghs and the Anghship is hereditary. Although the Anghs might not be rich in monetary terms, they wield enormous power and control over the society. The Angh of Lungwa, whose house straddles the international border – half of his house lies in India and the other half in Myanmar – controls five villages in the Indian side but has more than 30 villages under him inside Myanmar. These villagers pay their obedience or taxes (if you want to call it that) to the  Angh of Lungwa. Fire wood from the jungle, agricultural products and meat are all delivered to the Angh in certain portions. They have been doing this for ages and they have no regards for a man made border. In fact, many villagers from Lungwa are employed as soldiers in Myanmar’s army. The Konyaks are master craftsmen. They make excellent artefacts out of both wood and metal. They make fabulous muzzle loading flintlock rifles and pistols. If Robinson Crusoe had some Konyak friends, I am sure he would have had some very effective guns at his disposal rather than the ones he had which misfired and always at the wrong time too!!! And the Konyaks produce their own gunpowder too. We stayed for a couple of days at Helsa Cottage, built in the traditional Konyak style. There are some interesting villages like Chenga Senghu, Tang, Abhoi, Langmeng and Wakching. All these villages have gunsmiths who produce these amazing guns. These guns would make for superb wall hangs but pity we can’t get them to mainland India without a license.

If you are in Nagaland in the first week of April, head for Mon to see the Konyak Nagas celebrate the Aoling festival…A spectacle you will not forget in a hurry.

It was time to move on to Mokokchung and we decided to take the backroads.  We rode on decent roads till Wakching village and thereafter the roads deteriorated till it disappeared altogether. We passed through some coal mines at Naginimora area and realised that it were the coal laden Shaktiman trucks that have destroyed the road.

The offroad continued for another 80kms, all the time getting progressively worse. We suddenly emerged from the thick vegetation through which we were riding all morning and into a wide open space that had a lovely tarmac.  We had reached Tuli and from here, Mokokchung was all of 60 odd kms away,and most importantly, it was well paved roads all the way.

Mokokchung is the homeland of the Ao Nagas and most often called the Fashion Capital of Nagaland. We checked into tourist lodge and later in the evening headed for a jamming session of a local rock band. Mokokchung has seen a sea change in the last decade or so in terms of infrastructure, roads, hotels and shopping centres. It is one of the cleanest towns in all of Nagaland. Even the villages are clean, orderly and rather well to do.

Over the next two days, we went to villages like Kubza, Lungkhum – which has a strange rock formation that looks like a bridge, Mopungchuket – where there are some really impressive huge wooden statues and each with a tale behind it and a very high totem pole, Chuchuyimlang – one of the oldest villages in Mokokchung and certainly one of the best kept.

I will be riding through Nagaland in the very near future and next time I will make sure I visit those places which I missed this time..

The culture, tradition and the people who still maintain the age old tradition inspite of the invasion of the western cultures amazes me no end.

And yes, how can I forget all those interesting and often hilarious folk tales that I get to hear from the old people….I will save them for my