I have been in love with motorcycles and automobiles ever since I can remember. War era Jeeps, vintage British motorcycles and pre war huge American cars that looked like two roomed apartments, were parked at the garages of our ancestral home at Silchar, Assam. There was a shell of some classic car, fished out from our pond and rotting at our backyard, among the beetle nut trees, and it became “my” car for a few years. I had to share it with a mongrel that sometimes made it his home and there was a family of mongoose in the booth! But it was still my car.

As I grew, my obsession with automobiles increased and there were many misadventures. Our Ford V8 was misfiring once and I promptly opened all the 8 spark plugs at one go to clean them and could never fit the plug wires in the right order. It took almost a day for the mechanic to set the firing order right.

When I was 16, I conned my father into buying me an old 1941 Norton 16H motorcycle. It was not in too bad a condition and I got it running rather well except for a minor problem with the fuse box. “Why not fix that too” I thought, when I didn’t know a thing about bike electricals. I managed to short circuit the wiring and burn down the bike completely! I had the carcass until about 5 years back when my mother had enough of it and threw it away when I was at Delhi.

As the years rolled by, I bought some more old motorcycles and travelled a lot through the interiors of Assam. But the tours were expensive affairs even though petrol was all of Rs 5 a litre! My father asked me to earn my keep and I had to join an English daily newspaper that just started at Guwahati, Assam as a sports sub-editor. The pay was peanuts but it did oil the wheels of my motorcycles….a bit.

To supplement my income, I started a garage dedicated at restoring classic and vintage cars and bikes at Guwahati. Classics are my passion and the garage helped me work on some rare vehicles. It also helped me write articles for magazines on these old “beauties”!!

My clients were kind enough to let me drive their pride and joy to some distant places. I travelled on a lovely 1966 Beetle, drove through the hills of Meghalaya on a 1942 Citroen 11CV and on a Morris 8 which looked and behaved like a locomotive engine. Whenever I stopped after a long climb, the tiny car hissed smoke and vapour all over the bonnet. I drove through Kaziranga National Park on a 1942 1.5 Jaguar and sat on its long bonnet to watch the rhinos and elephants right next to the highway. There were fewer automobiles on the highway two decades back and it allowed me to press the throttle wide open on a Morgan +4 as I skimmed the surface. I owned a jalopy, a topless Standard Herald with a huge bison skull on the bonnet (just so that I would look different!!) which was the subject of a few articles in some local newspapers..

I also rode through the interiors of Assam, Nagaland, Meghalaya, parts of Arunachal Pradesh and Mizoram and I wrote a lot of travel articles. Motorcycle travellers were a microscopic minority in North East India those days (they still are) and I got special treatment wherever I went. I rode mostly through remote areas where I could see life in all its rustic glory, no coats of varnish to glaze them.

The hobby of maintaining classic cars sure is an expensive one and I found my client’s base becoming static. Restoring a vintage also is a time consuming affair mainly because of the paucity of spare parts and in Guwahati, it was almost impossible to find even basic engine parts. 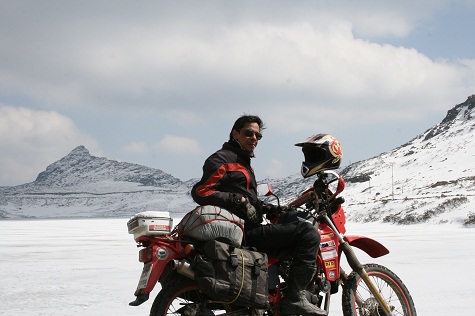 Since it was not really helping my cause, I decided to shut shop and move to New Delhi to look for new avenues. I joined an Automotive magazine and jumped at the opportunity to write travel stories and almost all the stories were from travels through parts of Northern India.

Over the years I changed jobs but maintained my travel writing to some extent and still confined to North India.

I found that very few magazines published travel stories from the North Eastern region. So for some exclusivity, I travelled through Assam, Meghalaya, Nagaland and Mizoram on a motorcycle and wrote a series of travel stories.

There were good feedbacks on the stories but there were also the usual questions-Is it safe to travel in North east? Are their airports? Brahmaputra is a small river, right? Do they hunt humans in Nagaland and do they eat dogs? Aren’t there bomb blasts and abductions?

These questions irritated me no end and so I took a long leave from India Times and led a group of 5 friends from Delhi for a 15 day trip through North East India. Three of the friends were very skeptical about the trip but at the end of the tour they wanted more.

They were absolutely smitten by the warmth of the people, the varied culture and tradition, the topography, nature and wildlife. In Nagaland, I took them to Mon to meet the headhunting warriors and they were floored by their warmth. When one of the bikes broke down late at night in the middle of nowhere in Wokha district in Nagaland, 6 of us slept in a farmer’s house, ate simple food served with a very liberal and genuine dose of love and warmth. They fell in love with Majuli Island and with the rhinos just as they loved the snowy heights of Sela Pass and the soft spoken monks of the Tawang Monastery. They wanted to ride forever on the lovely road towards Cherrapunjee and shivered and shouted themselves hoarse with glee when we got caught in an unseasonal downpour at the world’s wettest place.

Back in Delhi, they couldn’t stop talking about their trip and I started getting requests from friends of friends to lead them on such tours.

It sure had me thinking. No one conducts motorcycle tours through North East India although if you search the internet, you will find tour companies advertising their NE tours. But for most of them, NE begins and ends at Sikkim-no further. So why not start a motorcycle tour outfit?

Touring is my passion and I get to see newer places and meet interesting people every time I travel.

So I put in my papers at India Times, the internet division of Times Of India four years ago and started my own company and I named it Chain Reaction.

I named it thus because I felt that everything we do, sets off a chain reaction…for good or bad…mostly good!! I also decided to concentrate my operations in North East India to try and rectify the misconceptions that people from the rest of India harbour about this region. 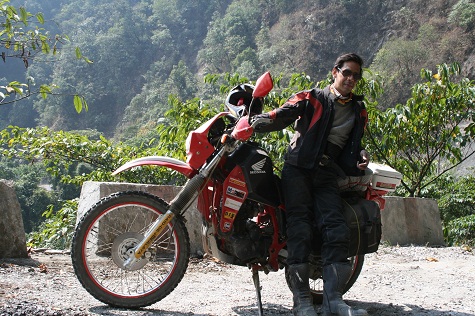 Since I write a lot about the people, places, custom, tradition, culture, festivals etc, on in-flight, lifestyle, travel and automotive magazines, I now get a whole lot of inquires from Indian clients which I never got before. The rest of India wants to see more of North East now.

Whoever said “make a hobby your profession and you will never have to work a day in your life” stuck the nail on the head!!…..But I will bet my life he was not a biker not by a long shot because the back sure hurts from all those thousands of kilometres spent on the saddle. Hard work but I am not complaining.

You can visit Chain Reaction at www.chainreactionindia.com for trade and tour inquiries or leave a query below.