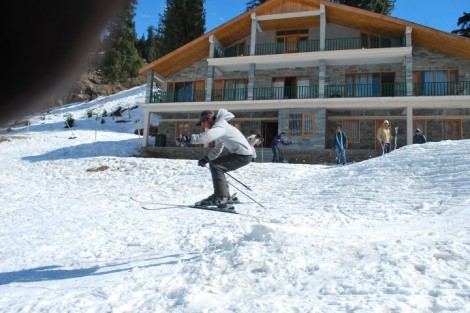 “All work and no play makes Jack a dull boy “ and what if work was all Play, now wouldn’t that make Jack happy and probably could have prevented him from being a Jack of all trades and hence master of at least one ? On a more serious note, Mountain Cruize , previously HOAA , teaches you to do just that with the additional bonus of an adventure camp in the wilderness,  right in the middle of nature’s lap, almost  cut off from civilisation. It was founded in 1993 by the legend who is fondly known as The Snow Tiger for his exploits, Colonel  Prem Chand  who is as much at ease as a trainer as being a mountaineer and holds the distinction of training Bachendri Pal and that  batch for its ascent to the Everest. He also holds the distinction of being the first Indian in the world to climb the Kanchendzonga .

HOAA ,( now named Mountain Cruize) was his dream of  an academy to train future mountaineers and the hard core adventurists , who literally lived their life on the edge, just like he did. It offered Govt. recognised basic as well as advanced mountaineering courses along with skiing and other skills and also certified course for tourist guide, at Kothi  near Manali, just a few kilometres below Rohtang  Pass , which served as an ideal terrain for the activities.

The name of Colonel Prem Chand was enough for enthusiastic young men to flock the institute for training under the master and pupils from Japan and Malaysia too used to turn up at the doorstep of the institute literally . In fact the first Malaysian expedition to the Everest had its initial training at HOAA .

However HOAA was a bit rigid and out of reach for the regular adventure seekers , which was more an institute or a professional academy. As they were regularly receiving requests for diversifying , they renamed it Mountain Cruize just last year and made it flexible in its approach.  Flexible, yes, but not compromised. “The quality, professionalism and safety that is associated with our institute was never compromised” maintains Mrs Arti Rajpal , the proprietor of Mountain Cruize and also the daughter in law of Colonel Prem Chand. Adventure ran in the family and the whole family is involved in the management, training and upkeep of Mountain Cruize as I could gather from Arti’s  patient explanation about the working of the camp, the faculty and courses provided. Mountain Cruize after its reinvention offered adventure camping, snow treks, river rafting, paragliding and also laid emphasis on environmental education, a new and unique concept. The faculty were all trained and professional personnel, mostly from the family, while at times they invited guest instructors too. True it was! Adventure certainly ran in the family.  Arti’s  husband and her brother in law both were instructors at the camp. On inquiring if Colonel  Prem Chand himself used to be present during the camp, she replied that he used to supervise the proceedings and there would be lectures or talks by him during the duration of the course. They also conducted movie shows of his earlier expeditions to liven up the lessons and there used to be other fun filled activities to keep the participants engaged. 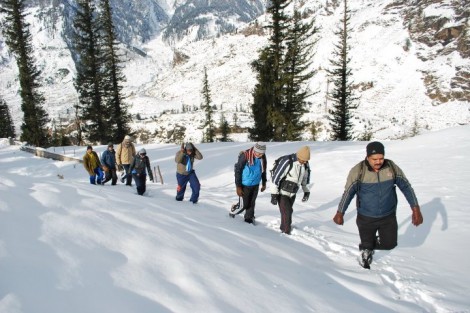 The course fees were slightly more expensive then the Govt. run institutes as it was a private non-profit educational institute, but they were quite reasonable if compared with the professionalism and facilities offered. Many private operators offer skiing and mountaineering courses as a part of their tourist attractions at lesser prices, but they are more hurried and less professional  in their approach. But here in Mountain Cruize, they started from the basics with a step by step approach to the next level. It required some amount of time, hard work and money, but the skill was for yours to keep life long and you returned satisfied of a job well done. The course duration ranged from a week to a month depending on the type of course you were looking for.

“Many a time people inquired if we are a resort, but we are not a resort. We run adventure camps and treks, depending on the demand and numbers, because running a whole camp based on just two people doesn’t make much sense. We prefer groups or we wait for some more enrolments to form the numbers”

In summers , if the weather was right, camping out was quite possible, while in winters they took residence in the dormitories inside the log hut. Basic amenities were made available but if you are looking for a Jacuzzi, swimming pool and an LCD television then let me remind you that it is a nature camp  as Arti said ,not a resort.

“Just come and stay once, you will rediscover yourself away from civilisation” Solitude is a divine teacher. But for those who feel claustrophobic in solitude, then there are your mates for your company and the bond that results when you are stuck with a few group members roughing it out in the wilds is priceless.

“ Many a times, the groups become like family and they come back again for the same experience the next year. It’s quite touching at such moments”

When asked if ever they had complaining members , she remembered how often, the new members would feel nervous and hesitant the first two days, but by the third day, all barriers and reserves would melt down and all you could see were smiling and happy faces around.

“There has been a hundred per cent  shift towards adventure tourism during the last decade. People are earning more, hence are ready to spend more. They have become more aware and more adventurous. They want to try out newer experiences and are raring to go”

What about its application in the career and job market, I had wondered. She explained that it all narrowed down to tourism boom and adventure activity professionals were being lapped up like hotcakes by the travel and tourism players. “They want experienced guides, instructors, managers etc etc. You could start your own adventure tourism business alone or with private operators. The opportunities are endless and are all out there for you to take”

And if you are wondering if there are any eligibility criteria, then there is none except for a sound health. Otherwise there is no age bar or educational qualification requirement. Of course it is advisable not to take along too young a kid during the harsh winters when most of the time Kothi is snowbound. But all you need is a young heart …